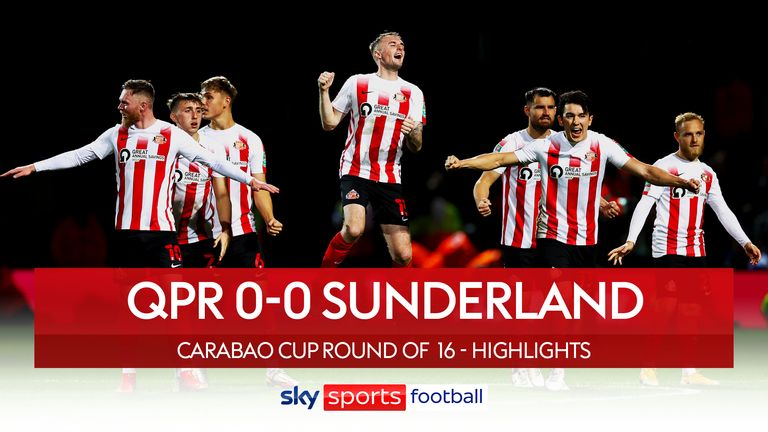 Highlights from the Carabao Cup fourth round tie between QPR and Sunderland.

Sunderland reached the quarter-finals of the Carabao Cup for the first time since 2014 with a 3-1 penalty shootout win over QPR after their fourth-round tie ended goalless.

QPR had beaten Leyton Orient and Everton on penalties to reach round four but fell woefully short at the third attempt, converting just one of their four penalties, with Yoann Barbet shanking the decisive spot-kick over the bar.

While QPR toiled at the spot, Sunderland held their nerve as Aiden McGeady, Ross Stewart, and Alex Pritchard all converted to send the League One Black Cats - the lowest-ranked team left in the competition - into the last eight for the first time since they made it all the way to the final in 2014.

QPR's defeat owed as much to their shambolic penalties as it did to a contentious decision to rule out Charlie Austin's 80th-minute header for offside, a goal which would likely have sent Championship Rangers through to the quarter-finals of the Carabao Cup for the first time since 1988.

The decision was compounded by Austin missing the first penalty in the shootout as QPR were dumped out of this competition by League One opposition for the fourth successive season, to leave Sunderland eagerly await their quarter-final fate in Saturday's draw.

Both promotion-chasing clubs have other priorities this season and the two managers made a combined 13 changes from their weekend line-ups.

But both sets of fans clearly felt otherwise with Loftus Road packed to the rafters - 15,372 a hugely impressive turn-out on a cold Tuesday night.

Lee Johnson's Sunderland have made a flying start to the season, having won 12 of their opening 16 games in all competitions and, backed by a large, noisy away contingent of almost 3,000, they created the first chances.

Lynden Gooch released Leon Dajaku, whose shot was blocked by Rangers keeper Seny Dieng at his near post, before teenage midfielder Dan Neil slalomed along the edge of the Rangers area and forced Dieng into another save with a low drive.

But Rangers began to dominate and almost went ahead through Barbet's piledriver from the edge of the area which was clawed out by Lee Burge.

Chair was inches wide with a first-time shot from 18 yards and Andre Gray played in Scotland striker Lyndon Dykes, who was also just off target as he slid the ball past Burge.

Sunderland almost fell foul of a comical own-goal when a sliced clearance from Frederik Alves narrowly cleared his own crossbar, and Burge saved again from Gray to keep it goalless at the interval.

After the break Austin volleyed Osman Kakay's cross just over before the night's controversial moment came.

Albert Adomah's shot was deflected into the path of Austin with Dennis Cirkin seemingly playing both onside. But as the veteran striker bundled the ball home a flag was belatedly raised as penalties loomed, where Austin's spot-kick was saved by Burge and Rangers were frustrated in the cup yet again.

QPR boss Mark Warburton: "I've just seen it [Austin's disallowed goal]. What can I say without getting fined? It's staggering to be that wrong on a major decision in a game of that importance. I was told it was immediately offside by the fourth official.

"With what's at stake, the financial implications for the club, big crowds home and away, everything which comes with progression to the last eight, I've never been so shocked to see a picture like that. To be that far onside, you have to question what did they see? I hope this doesn't get me too much of a fine."

Sunderland boss Lee Johnson: "I thought bar a 20-minute spell in the first half we were worth the draw and the victory. In the second half we were the better side.

"It's a really good learning game for us and the atmosphere was unbelievable. I think our goalkeeper Lee Burge deserves a lot of plaudits tonight. I think this was our biggest test to date. It shows we've got spirit in the club."

QPR host Nottingham Forest in the Sky Bet Championship on Friday at 7.45pm - live on Sky Sports Football - before Sunderland travel to Rotherham in Sky Bet League One on Saturday at 3pm.

When is the Carabao Cup quarter-final draw?

The quarter-final ties will be played during the week of December 20.