Report as goals from Ianis Hagi, Ryan Kent, Joe Aribo, and Alfredo Morelos see Rangers beat Dundee United 4-1 at Ibrox to stay top of the Scottish Premiership and unbeaten in league; Steven Gerrard's side just seven points away from title after Celtic lose 1-0 to Ross County 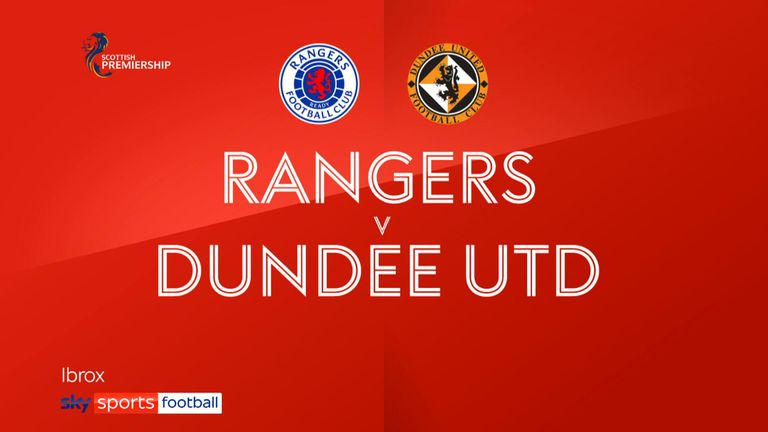 Highlights of the Scottish Premiership match between Rangers and Dundee United

Rangers continued their seemingly unstoppable march to the Scottish Premiership title with a resounding 4-1 win over Dundee United at Ibrox on Sunday.

The second half was a stroll in the Glasgow spring sunshine as first Joe Aribo's rocket made it 3-0 to Steven Gerrard's side three minutes after the interval, before Alfredo Morelos - not that the striker knew anything about it - added a fortuitous fourth on 64 minutes after a mistake by Benjamin Siegrist.

Rangers could have scored a fifth, only for Siegrist to make up for his earlier error by keeping out Borna Barisic's penalty, while the visitors did grab a late consolation thanks to substitute Marc McNulty's fine individual strike.

As a result, Rangers have moved 18 points clear of second-placed Celtic and are just seven points away from claiming the title after the champions lost 1-0 to Ross County on Sunday night.

How Rangers stayed perfect at Ibrox

Leon Balogun was back at right-back after replacing injured Rangers skipper James Tavernier during Thursday's Europa League thriller in Antwerp.

Gers' home record has been built on solid foundations this term - but United really should have rocked Ibrox given the chances they created.

It took just eight minutes for them to cut through a team that had a distinct leggy look after their exertions in Flanders.

European hangovers have hardly been a major issue this term, with only two points dropped after continental action.

That tally may have grown without Allan McGregor, who bailed out his team with a big block as Lawrence Shankland burst past Filip Helander.

The 39-year-old also had to be quick off his line to dive at Louis Appere's feet as Gers were opened up again.

United were firmly on top but needed to take advantage while they were on top - with Mellon groaning as a Shankland ball sped across goal without finding a taker.

Gers finally woke up after 20 minutes but found a goalkeeper in just as good form in the United goal, with Siegrist throwing himself down to his left to push away Aribo's strike after the Ibrox playmaker had skipper past Jeando Fuchs.

But it was far from comfortable for the hosts, who had more to worry about on 27 minutes as Jack limped off pointing to a problem with his right leg.

Another key man missing will be the last thing Gerrard needs after this week's injury blows to Tavernier and Kemar Roofe.

But at least he still has McGregor, who was called into action for the third time to push away Appere's 25-yard strike with a brilliant stop at full stretch.

The opener on 35 minutes also raised the manager's spirits.

Aribo was proving to be Rangers' main instigator in attack and demonstrated that again as the Nigeria international drove into the box to shoot, with his effort getting a helpful steer past Siegrist as Hagi simply opened his foot up as the ball made contact with his boot.

It was cruel on United - with worse to follow two minutes later as Balogun headed down a Barisic cross for Kent, with his shot again squirming past the helpless Siegrist after clipping Ryan Edwards' inside boot.

Mellon would have urged his men at half-time to make a contest of it by claiming the next goal - but their chances were gone within three minutes of the restart as Aribo marched into the box and unleashed an unstoppable drive into the corner.

Morelos had been unlucky with a handful of chances but his perseverance paid off on 64 minutes as he chased down an Edwards back pass to Siegrist, with the keeper's clearance slamming off his body before bouncing into the empty need.

It was the Colombia international who won Gers their penalty two minutes later as he was brought down by Fuchs.

Barisic, however, could not repeat his midweek heroics from 12 yards as Siegrist pushed the spot-kick away.

United, however, merited at least a goal and got it with four minutes remaining as McNulty finally beat McGregor from just outside the box.

Rangers boss Steven Gerrard: "I think it is normal to think, I don't think there is any harm to think.

"But the one thing I won't do is get carried away too soon. We have just got to finish the job off. The games are there for us, the opportunity is there for us but the big reminder to myself, staff, players, supporters and anyone else that is covering us is that we have won nothing yet.

"The main thing that has pleased me at the moment is that the players are really in the zone. I can see the focus, I can see the determination.

"The big reminder today is that it is another positive result, another big step, but we have still got work to do."

Dundee United boss Micky Mellon: "If you're going to come here and want to be successful, if you create that number of chances you have to take them, simple as that.

"Walking up the tunnel at half-time I understood why we're 2-0 down, because you're playing against the team at the top.

"At times you understand Rangers have players worth millions and they're going to punish you at some stage.

"But if we perform like today, we will undoubtedly be a force in the Premiership. Standards are getting set all the time and we set a new one today."

Rangers host Royal Antwerp in the second leg of their Europa League last-32 tie on Thursday night, leading 4-3 from the first leg, before travelling to Livingston on Wednesday March 3 (6pm) in a game you can see live on Sky Sports.

Meanwhile, Dundee Utd take on Kilmarnock at Rugby Park on Saturday at 3pm.