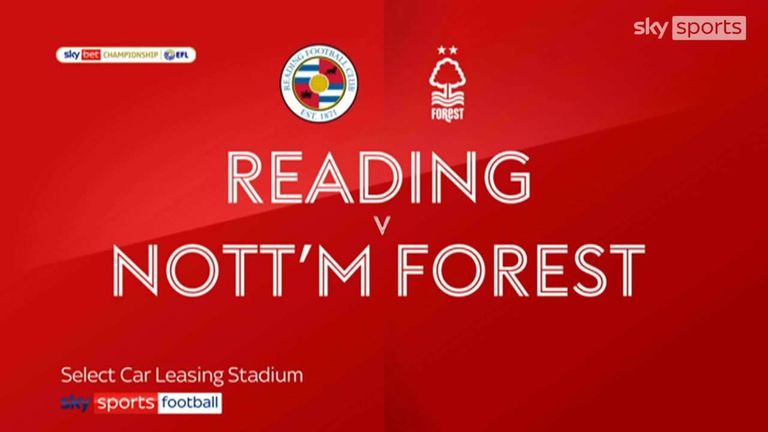 Reading reacted positively to their EFL points deduction with a hard-earned 1-1 draw against Nottingham Forest.

Forest went in front early on through an excellent strike from Philip Zinckernagel and although the Royals dominated much of the opening half, they failed to find an equaliser.

In a mostly even second period, Reading levelled in the 64th minute when centre-back Scott Dann drove home from a corner.

Reading were deducted six points on Wednesday for breaching the EFL's Profitability and Sustainability limit for the period from 2017 to 2021 by almost £19m.

It dropped them from 16th to 19th in the Sky Bet Championship, four points off the relegation zone.

Forest, unbeaten in three matches, had lost only once in nine games since Steve Cooper took over as head coach in September.

It was Forest who started the better, showing a lot of tenacity in the tackle, and they went ahead in the fourth minute.

Zinckernagel, on loan from Watford, cut in from the left flank and twice shaped to shoot, which left the home defenders floundering.

Having created the space, the Danish forward then drove a crisp 20-yard drive past the despairing dive of goalkeeper Luke Southwood.

Reading responded brightly, with Andy Yiadom crossing from the right to set up midfielder Danny Drinkwater.

Forest goalkeeper Brice Samba made a fine stop from Drinkwater's powerful effort, with the loose ball eventually hacked to safety by the visiting defence.

Samba was called into action again, having to punch clear after Reading defender Baba Rahman had unleashed a fierce long-range attempt.

Joe Lolley blazed high over the home crossbar from a rare Forest attack but Reading finished the half strongly.

George Puscas was denied by a smothering last-ditch save from Samba and the busy Forest 'keeper also kept out an effort from Drinkwater.

Forest upped their tempo at the start of the second half.

Lewis Grabban could have made it 2-0 when his shot beat Southwood but was cleared off the goal-line by Reading captain Liam Moore.

Jack Colback tested Southwood with a drive from distance while Zinckernagel sent a free-kick fizzing wide.

But Reading drew level just past the hour, shortly after the introduction of substitute Andy Carroll.

The former England and Newcastle striker, signed on Monday as a free agent on a two-month deal, played a minor role in the equaliser, providing the nod-down for John Swift to earn a corner.

Swift took the set-piece, low and hard into the Forest area and perfect for Dann to sweep home past Samba.

Forest tried to respond, with Grabban finding the side-netting from a tight angle, but Reading proved good value for their draw.

Reading's Veljko Paunovic: "We made it tough for ourselves by conceding the early goal. And this was the second game in a row that we've done that. It's avoidable and something that we will have to look at again. We must not put ourselves in situations where we have to react and have to deal with extra adversity at the beginning of the game.

"But we played some good football today and our style was our strength. Maybe we should have been much more clinical in the final third and more ruthless."

Nottingham Forest's Steve Cooper: "We had a really good start to the game and I felt that we could have capitalised on that. I thought we got in some really good positions but a little bit of our technique and decision-making - to create more opportunities - let us down. I'm not saying that we would have scored but we would certainly have got in positions to score and go 2-0 up.

"I thought Reading played well. They've got a lot of good players and play with a good tactical idea. We prepared well for that and it did sort of go that way. So we always knew that we had to manage both sides of the game. I just felt that we could have played with a little more control and we've come off a bit frustrated that we haven't won."