Highlights of the World Cup qualifying group F match between Scotland and Denmark.

Scotland put the cherry on top of an outstanding World Cup qualification campaign with a 2-0 win over Denmark to secure a home tie in the play-offs.

Denmark were unbeaten in their last 26 qualifiers for World Cups and European Championships and had won all of their nine matches in Group F to top the group but met a Scotland side at full-pelt as John Souttar headed home the opener on 35 minutes.

Steve Clarke's team were tenacious all over the pitch but backed that up with quality when Che Adams raced clear with three minutes left to rubberstamp the victory, Scotland's sixth win in a row.

The result means Scotland's tally of 17 points guarantees them a spot as one of the highest-ranked group runners-up, meaning their one-off World Cup play-off semi-final will be at Hampden Park against an unseeded opponent.

"What a performance, what a night. That is as good as anything I have seen," said Sky Sports' co-commentator Ally McCoist.

The play-off draw for the European nations takes place in Zurich on Friday, November 26 at 4pm UK time.

How Scotland dominated the Danes…

The hosts needed to win to ensure they would be among the six seeded teams and get home advantage in the 12-team play-off process. Five Scotland players were just one booking away from a possible suspension in the play-off but that didn't hold them back in a highly energetic and tenacious start.

Adams brought the best out of Kasper Schmeichel, who had to be quick with his feet to divert a well-struck effort away from danger.

Scotland won eight corners inside the first 35 minutes with the eighth providing the breakthrough.

From a brilliant John McGinn delivery, Liam Cooper headed back across the goal for fellow defender John Souttar to head home. It was Souttar's first goal for his country and capped a remarkable comeback from a serious Achilles injury that kept him out of action for a year.

Denmark looked a shadow of the side that had blazed a trail through qualifying but they upped the tempo in the second half without putting Craig Gordon under any serious pressure.

He was called into action to deal with Denmark's first shot on target on 82 minutes but Anders Dreyer's effort from 20 yards was tame and easily pushed clear. A far better chance fell to Mikael Uhre three minutes later but he couldn't generate any power on a strike from 10 yards to seriously trouble Gordon.

As the clock ticked towards 90 minutes and the Danes pressed for an equaliser, the ever-willing Adams sealed the win with a brilliant breakaway goal, curling the ball beyond the despairing dive of Schmeichel to send the home fans into ecstasy. 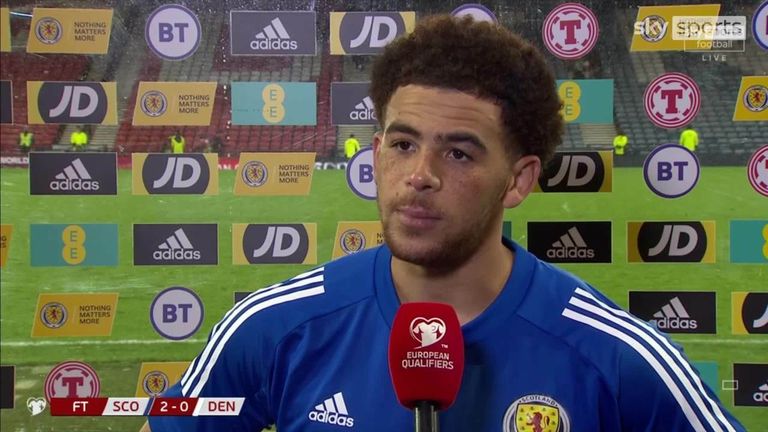 Che Adams says Scotland fully deserved their 2-0 win over Denmark and says confidence is very high in the camp.

The McGinn, Callum McGregor and Billy Gilmour axis in the centre of midfield is fast becoming the platform for Scotland's rejuvenation on the international stage. All three complement one another to make it a trio to be feared. Gilmour and McGregor are silky with the ball whilst the drive, quality and tenacity comes from McGinn, who covered every blade of grass as Scotland suffocated Denmark in midfield.

Scotland boss Steve Clarke: "I get criticised for not smiling enough but if you can't smile after a performance like that there would be something wrong with me. I'm delighted everything came together. We played good football on the front foot to try and win the game. It's a good night for us. I knew the players were confident and they showed it. We had to dig-in but we defended well although the legs went a bit towards the end. A great night with a great atmosphere.

"It was important to get the home semi-final. I took a little risk playing the boys who were on a yellow card but we wanted to finish on a high. We had a chance to win six competitive games in a row which isn't easy to do. The boys wanted to do it and they showed it on the pitch."

On John Souttar's goal: "It's the best story of the night. I'm so happy for him. He's had a horrendous time with injuries to come back. Even to be in the squad. He was delighted to be back and to play the way he played. Not just his goal but defensively and with the ball. It's a great story." 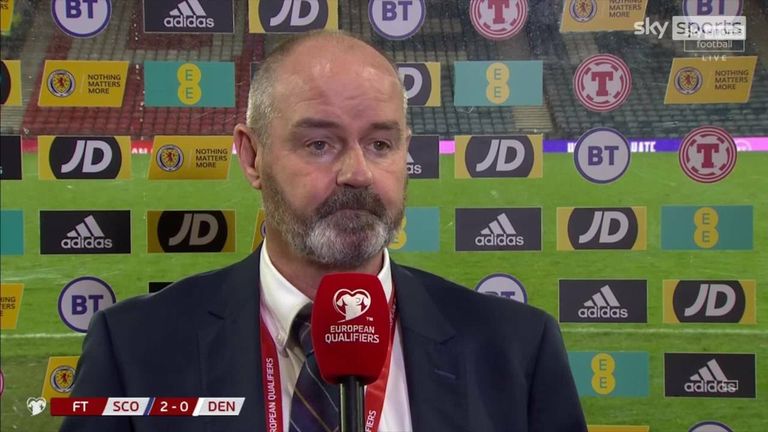 Scotland head coach Steve Clarke says everything came together in their 2-0 World Cup qualifying win over Denmark and the Scotland boss was delighted his team recorded their sixth win in a row.

Israel finished third after beating the Faeroe Islands 3-2 in a tense finish, and Austria won against Moldova 4-1.

On November 26, the 12 teams will be drawn into three play-off paths for one-off semi-finals on March 24 and finals on March 29. The three path winners will qualify for the World Cup.

Scotland are set to find out their play-off opponents on Friday, November 26 before their one-off semi-final on March 24. The draw for the World Cup, where Denmark and potentially Scotland will be involved, will be held on 1 April next year.