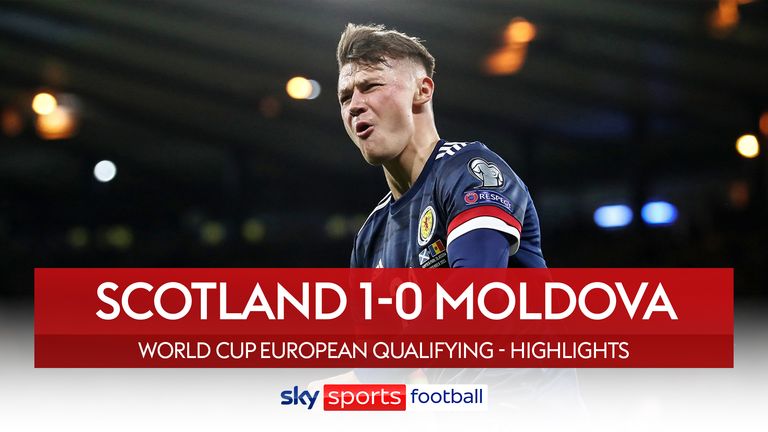 Highlights of the World Cup Qualifier between Scotland and Moldova

Lyndon Dykes' early tap-in gave Scotland a crucial World Cup qualifying win over Moldova, but the hosts wasted a hatful of chances to earn more than their 1-0 victory.

Dykes scored his first international goal in almost a year to get the Tartan Army off to a perfect start in front of a 40,000-strong home crowd, turning home the rebound from Nathan Patterson's fine give-and-go with Kevin Nisbet.

Scotland dominated from the first whistle to the last without adding to the tally, and were guilty of wasting a number of glorious opportunities in either half, with Ryan Christie and Billy Gilmour especially guilty of passing up gilt-edged positions.

The three points were the main priority for Steve Clarke's side though in their second competitive victory since beating Serbia on penalties to secure Euro 2020 qualification last November, and lifted them above Austria and into third in qualifying Group F.

"The instruction to everyone is to play on the front foot," said manager Steve Clarke ahead of kick-off. His demands were heeded by his players from the start, as Patterson and Tierney both tried their luck even before Dykes' 13th-minute opener.

A moment of real quality would produce that first goal, as Patterson stormed into a challenge in midfield before exchanging passes with Nisbet, stroking towards the far corner from the return and forcing Cristian Avram to palm into Dykes' path for a simple finish, his first at international level in almost a year.

Scotland should have added more to their first-half tally with Tierney's goal-bound header easily tipped over and Andy Robertson blasting over when well placed, and went in at the interval knowing the only thing denying them more goals was their own final ball.

"Hopefully they can get a few more in the second half, with a little bit better composure," former Scotland forward James McFadden said at half-time.

That composure was still lacking nine minutes into the second period when Hanley got up to meet Gilmour's corner and flicked his unmarked header way over the bar.

Worse would follow from Gilmour, who played another fine one-two with Nisbet, and with only the goalkeeper to beat sidefooted wide from 10 yards.

As time wore on, Hanley nodded another free header over before Christie, having worked space brilliantly, blazed Scotland's 15th shot of the night off target with time running out.

The five minutes added on as injury time should have been comfortable for Scotland to see out after such a dominant performance, but their wastefulness kept the bumper crowd on their toes until the final whistle.

Only then could they finally celebrate an important three points in the Tartan Army's hopes of World Cup qualification, ahead of another huge encounter with Austria on Tuesday night. 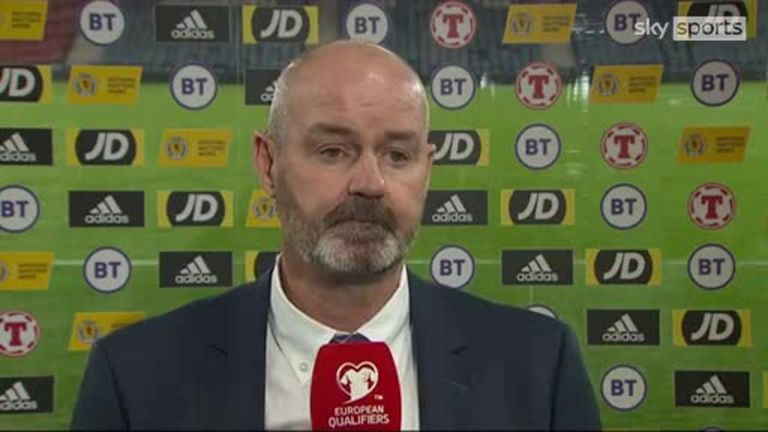 Scotland manager Steve Clarke: "It's a good win for us, we needed the second goal to make it a little bit more comfortable but in terms of chances against, there were almost none.

"We started well, a lot of good stuff, made a lot of good chances, and if we'd been a bit more clinical it would have been a much more comfortable scoreline."

Boyd: Opportunity for Scotland after victory

"You want the polished performance, but sometimes you don't get it. The most important thing was the three points, it gives Scotland an opportunity on Tuesday night now, going to Austria.

"There were pleasing signs there, we've been guilty over the years of missing chances."

Scotland end the international break away to Austria on Tuesday night, live on Sky Sports Main Event from 7pm; Kick-off at 7.45pm.