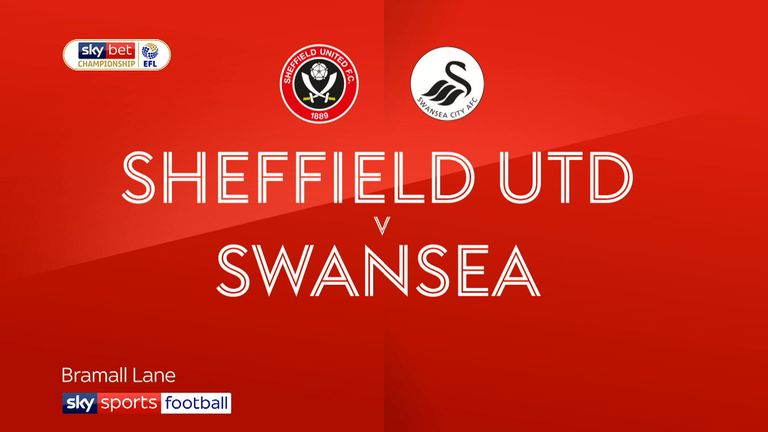 Yan Dhanda scored with his first touch in senior football to clinch a 2-1 victory for Swansea against Sheffield United at Bramall Lane.

The former Liverpool youngster slotted home within 30 seconds of coming on to complete the turnaround after Oliver McBurnie (71) had cancelled out George Baldock's opener (62) on Saturday evening.

It appeared both sides would have to settle for a point before Dhanda's 85th-minute winner handed Graham Potter the perfect start to life as Swansea manager.

Kristoffer Nordfeldt produced a brilliant save to prevent an own goal from Connor Roberts as Chris Wilder's team began their Sky Bet Championship campaign with a home defeat.

Man of the match: Barrie McKay

An uneventful opening half saw Chris Basham avoid picking up a yellow card for diving as he went down inside the box despite no contact from Federico Fernandez.

But United improved in the second period as David McGoldrick flashed a shot wide before John Lundstram ought to have done much better in slicing wide when put through by the striker.

The hosts made their superiority count just after the hour-mark as Lundstram found Baldock lurking on the edge of the box, and the full-back's accurate low shot beat Nordfeldt low to his right.

Potter wasted no time in making a change as Jefferson Montero was introduced, and the Ecuador international was instrumental in Swansea's revival in the Steel City.

Swansea ought to have been level when Dean Henderson kept out Jay Fulton's looping header, but after saving Leon Clarke's goal-bound interception, McBurnie was on hand to crash home the equaliser from an acute angle.

The 22-year-old, who derailed Sheffield United's promotion hopes last season while on loan at Barnsley, flashed a header wide from Montero's cross before the impressive Barrie McKay volleyed against the crossbar.

Swansea sensed a chance to seal all three points as Potter threw on 19-year-old Dhanda with five minutes remaining, and after McKay was fouled inside the box, referee Jeremy Simpson played the advantage for the former England U17 international to stroke home the winner.

Chris Wilder: "We can't defend like that against quality players. We have to defend properly. Their first goal is well-worked but we've gone to press when we shouldn't have done.

"The second goal is a really poor one. We don't defend it at the back stick, so it's a game we could've won, but this is the harsh realities of Championship football."

Graham Potter: "I thought we acquitted ourselves really well. I thought we limited them in the first half but we weren't as good as we could be ourselves, but we quietened the crowd.

"We showed real quality and character to come back. I'm pleased for the lads and the supporters. We started the second half well but the goal knocked us. We could've caved in, but we responded. The character of the players was amazing."

Man of the match - Barrie McKay

Swansea have lost a plethora of talent this summer but McKay demonstrated just why Potter brought him in. Some of his play on the transition was very dangerous, and the Swansea manager believes the supporters will enjoy watching him this term.

Having very nearly capped his performance with a goal, he told Sky Sports: "This is a tough place to come and the players really dug in.

"The boys bounced back from going behind and showed real courage. It's a real rebuilding period for the club, so to bounce back on the first day of the season is massive."

Sheffield United travel to face Middlesbrough at the Riverside on Tuesday night, while Swansea host Preston at the Liberty Stadium next Saturday.