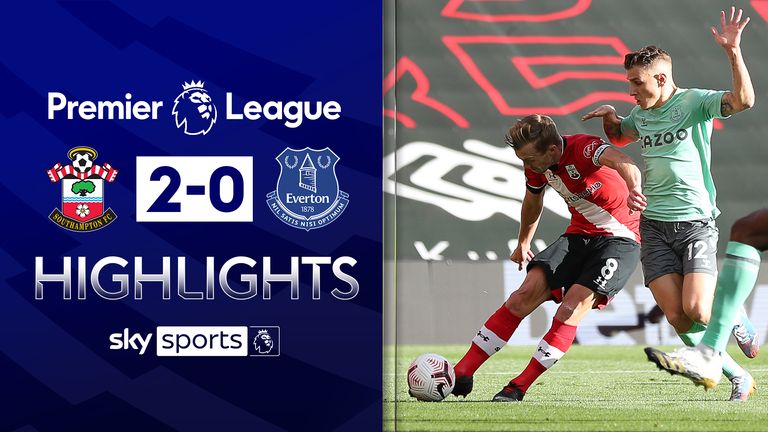 FREE TO WATCH: Highlights from Southampton's win over Everton

Rejuvenated Southampton moved up to sixth in the Premier League as Everton's unbeaten record was ended by a 2-0 defeat on the south coast on Super Sunday.

James Ward-Prowse found the breakthrough with a crisp finish from Danny Ings' pass (27) before Che Adams' second goal in as many games stretched Southampton's lead (35).

Everton rarely threatened to reach the heights of their season so far as Lucas Digne saw a straight red card for a challenge on Kyle Walker-Peters (72) to compound a miserable afternoon for the visitors.

Carlo Ancelotti's side missed the chance to reclaim top spot outright but they remain ahead of second-placed Liverpool on goal difference as Saints extended their unbeaten run to four games.

Man of the match: Nathan Redmond.

Southampton were impressive and deservedly had this game won before Digne's dismissal against a side who hadn't lost since the final day of last season at home to Bournemouth.

The visitors, wearing their seafoam and charcoal third strip, had the chance to reclaim the outright lead at the summit after the defending champions fought back to beat Sheffield United. Sunday marked precisely 12 months to the day since Southampton were hammered 9-0 against Leicester at his ground.

Seven of those who started that rain-soaked night were in the starting XI here, and the hosts had the first opening when Adams was just unable to connect with Nathan Redmond's scuffed shot from Ryan Bertrand's cross after 12 minutes.

Southampton welcomed back Stuart Armstrong, 16 days after he tested positive for Covid-19. The Scot came in for the ineligible Theo Walcott in the one change to the side that drew 3-3 with Chelsea last weekend.

James Rodriguez was fit to start as Carlo Ancelotti made three changes to the side that drew 2-2 with Liverpool last weekend. Ben Godfrey made his first Premier League start in place of Seamus Coleman. Alex Iwobi replaced the suspended Richarlison while Gylfi Sigurdsson came in for Andre Gomes in midfield.

Everton were seeking to win their first three league away games for the first time in 82 years, and after Alex Iwobi saw a deflected effort roll wide moments later, Gylfi Sigurdsson came agonisingly close to breaking the deadlock when his right-foot strike clipped the crossbar from the edge of the box.

But eight minutes later, Southampton took the lead through their captain. Jordan Pickford was alert to tip Oriol Romeu's deflected piledriver around the post, but barely 30 seconds later he was beaten as Ward-Prowse latched onto Ings' pass to flash his shot across goal and into the far corner.

Everton needed to regroup but fell further behind as the hosts continued to target their opponent's right-back position. Forty-five per cent of Southampton's attacks were down the left and when Ings escaped Ben Godfrey to cross, Adams was able to take a touch and shoot beneath Pickford via a Sigurdsson deflection.

Ancelotti's side were severely missing the leadership of Seamus Coleman and the darting runs of Richarlison. In this gloriously unpredictable start to the season, Everton were one of few teams to find a degree of consistency, but they were well below par on the south coast, even after Bernard was introduced for Iwobi at the break.

Instead, Saints continued to threaten as Redmond curled a shot over before Ings was inches away from meeting Armstrong's cross. Everton briefly flickered into life after Anthony Gordon replaced the disappointing Sigurdsson but Digne was then dismissed to extinguish any hope of a fightback.

The Frenchman failed in a couple of attempts to bring down Walker-Peters as he drove forward, before catching the Southampton full-back on the back of the leg to bring a straight red card from referee Kevin Friend.

To compound a miserable afternoon for the Merseysiders, James Rodriguez played out the final 18 minutes having aggravated the same leg injury which has made him a doubt for the game as Everton's unbeaten run came to a juddering halt. 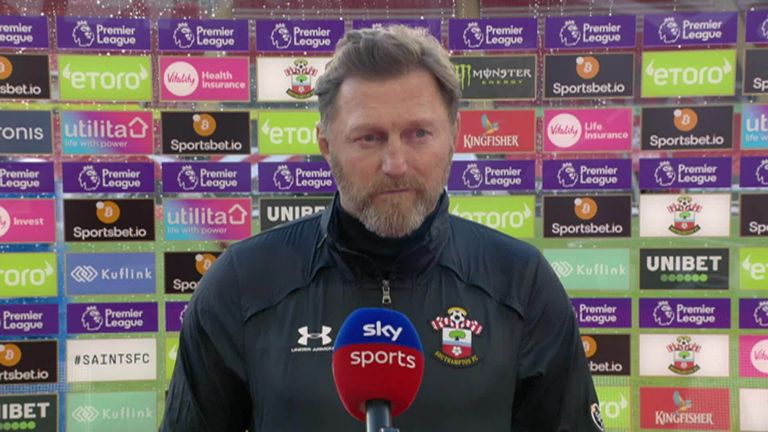 Southampton manager Ralph Hasenhuttl praised his players after their comfortable 2-0 win over table-toppers Everton, claiming it was on the best home performances his side has produced

Southampton boss Ralph Hasenhuttl: "It was definitely one of our best performances so far against a strong side. There was good game management and a good balance to our team. It was important that we kept the ball and made our opponents run, and we did this in a fantastic way. We've shown good steps forward in the past couple of games, and it's necessary if we are to become a better side.

"It's not important for me who scores, but what everyone does for the team. It's important to make assists too, and our game management, and playing through the lines was fantastic today. We showed with the two goals how easy it is to score if you do it well It was a dominant win as we limited their chances, and it was a good performance.

"It was coincidence that we played more down the left, but it's more important that you're dangerous on every side. Flexibility is key and we lured them a little bit. We limited the passes to Calvert-Lewin and the back four were fantastic."

Everton boss Carlo Ancelotti was not happy with Kevin Friend's decision to send off Lucas Digne for his challenge on Kyle Walker-Peters. Ancelotti has said that the Toffees will appeal the red card

Everton boss Carlo Ancelotti on Digne red card: "I think so [it was harsh], we're going to appeal. It was not intentional, it was not violent conduct. It could be a yellow card but it wasn't violent conduct and the red card was unfair.

On Rodriguez's fitness, Ancelotti added: "I think we have to check in the next few days, but he was tired at the end. He felt his muscle, but I don't think it's a big problem. It's true the game was difficult for everyone."

Man of the match - Nathan Redmond

Key to Southampton's success was the use of a narrow four-man midfield which squeezed Allan in possession and isolated the Brazilian, with Redmond impressive both with and without the ball.

The winger had three shots, more than any other player on the pitch, while he showed his combative side with his game-high 22 duels as Everton were out-thought and out-fought on an off day. 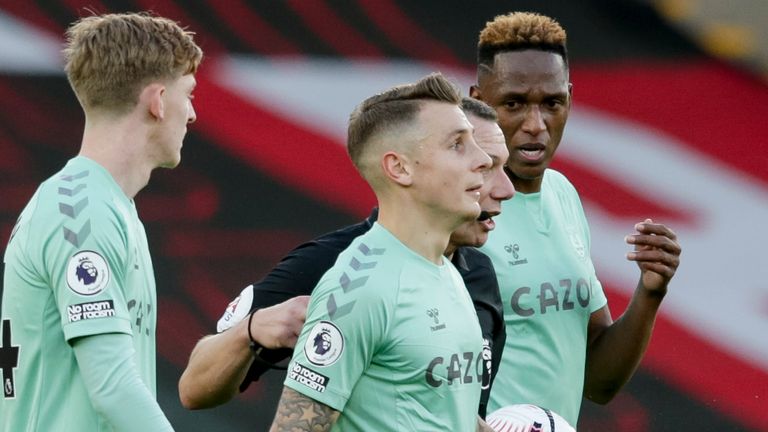 "The word intent is thrown about, but players don't intend to injure other players. Digne's tackle is an accident, it's a yellow card, get on with the game. I really hope the referee and authorities look at it and see it's not a red card.

"It's already cost Everton because they had to play a large chunk of this game with 10 men, but the three-game ban for serious foul play has to be overturned. If we get to the stage where that is a red card, the game is officially gone."

"We knew it was a good challenge for us before the game, for a team to come here unbeaten. We didn't like that feeling and we wanted to make sure that we could spoil that run.

"Confidence is high after the draw at Chelsea and overall it was a professional performance.

"We just had to be ourselves and be aggressive. We believe in what we're doing and we're very well organised. As long as we do that, we have the ability to then score goals and we should've had a few more today."