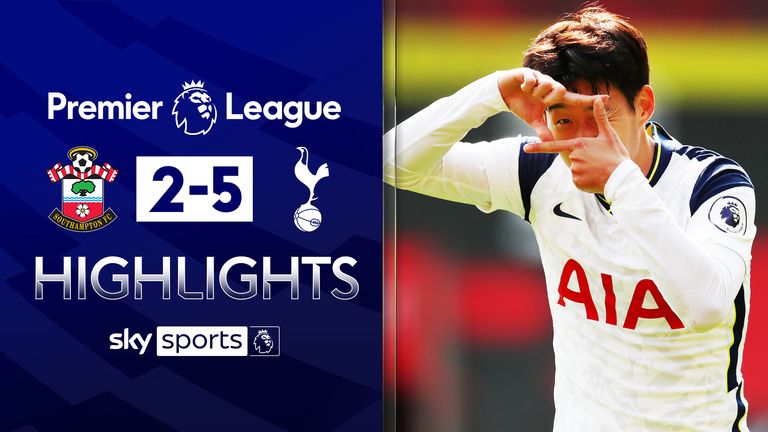 FREE TO WATCH: Highlights from Tottenham's win over Southampton in the Premier League

Heung-Min Son netted an astonishing four-goal haul - all made by Harry Kane - as a second-half blitz saw Tottenham demolish Southampton 5-2 at St Mary's.

In a game which barely stopped for breath from beginning to end Kane was denied a third-minute opener by VAR before Danny Ings saw a strike ruled out for handball, but soon made amends by firing in a superb strike from Kyle Walker-Peters' ball (32).

Spurs looked nearly as despondent as in their opening-day defeat Jose Mourinho had labelled "lazy" before half-time but were handed a lifeline when Son finished off from another difficult position from Kane's wonderful delivery (45+2).

The phrase 'a game of two halves' barely did justice to what would follow after the interval, with Son putting Spurs in front within two minutes from a Kane through-ball (47) - before netting twice more in near-identical circumstances (64, 74).

There was still time for Kane to get on the scoresheet himself when he turned in the rebound after Erik Lamela struck the post (82), before Ings grabbed a late consolation from the spot after Matt Doherty was adjudged to have handballed a cross (90).

On a weekend already boasting some big scorelines, both sides showed no intention of sitting back in the opening stages with Spurs briefly believing they had taken a third-minute lead after a superb swivel and finish from Kane, only for VAR to deny him due to an earlier offside from Son.

That intensity - and drama - certainly set the tone for a game unrepentant in its level of incident, and 10 minutes in Che Adams' drive was turned behind by a flying Hugo Lloris stop as the hosts rapidly grew into the game.

The goalkeeper was almost left red-faced minutes later when racing off his line to meet Ings and heading the ball into the striker, who then controlled and calmly beat him from 25 yards - until the eagle-eyed linesman spotted it had hit his arm in the build-up.

The game did see a first goal on the half-hour mark, and it was worth the wait. From Walker-Peters' ball into the channel, Ings took one superb touch before beating Lloris with a second from the tightest of angles.

From there, it looked like a case of how many for Southampton before the break. But unable to turn their positional dominance into chances, they were caught out on the stroke of half-time when Tanguy Ndombele wrestled clear of two challenges before finding Kane on the left.

Southampton made two changes from their opening-day defeat at Crystal Palace, with Moussa Djenepo replacing the injured Nathan Redmond and Stuart Armstrong in for Will Smallbone.

Jose Mourinho left Dele Alli out of his Tottenham squad again, but did give Tanguy Ndombele his first start since March, with Davinson Sanchez replacing Toby Alderweireld in defence.

The Spurs striker turned provider with a pinpoint cross to Son at the far post, who in turn produced a finish nearly as good as Ings from another difficult position to level.

Southampton were stunned, Spurs were incredulous, and the hosts failed to shake off that hammer blow after the break. Within two minutes Kane had again fed his strike partner, who kept his cool to beat Alex McCarthy with a fine low finish.

With the next goal crucial, the difference between the two sides was laid bare on the hour. Moments after Adams had missed the far post with a presentable chance, Kane's through-ball from wide found Son again unmarked against Southampton's inexplicably high-lined defence, and he gave the home side a lesson in clinical finishing by sealing his hat-trick in style.

He was at it again with 16 minutes remaining as Southampton continued their second-half capitulation, with Kane again looking up from the right, finding Son and letting him do the rest.

The England captain finally got himself on the scoresheet eight minutes from time, as Son's cross was met unmarked by substitute Lamela, who struck the base of the far post before Kane tapped in from close range, and in the dying moments Ings reduced the deficit from the penalty spot after a handball against Doherty, given by VAR.

As impressive as Tottenham's second-half blitz had proven, the concerns over Southampton's fragile mentality were plain to see on Ralph Hasenhuttl's face at full-time - less than a year since his side were thrashed 9-0 by Leicester on home soil - as their search for a first win of the season continued.

Man of the match - Heung-Min Son

Kane can count himself unlucky to make four goals and score another and still not be the best player on the pitch.

Mourinho certainly thought he was - but the nature of Son's finishes, and the confidence with which he approached them, can't be overlooked.

His movement, often facilitated by Kane dropping so deep, was timed to perfection against an admittedly porous Southampton backline, and was wonderful all afternoon. But that was nothing on his finishing - which was exemplified with his stunning equaliser on the stroke of half-time.

Without that, there might not have even been another three for Kane to assist.

Tottenham boss Jose Mourinho told BT Sport: "The second half was really, really good. We didn't start badly, of course the goal was disallowed by offside but we started quite well, then we lost control of the game in the first half. Their strikers created problems, we conceded, it was a replica of a goal we conceded here last season too.

Second half, we had a great dynamic, there was good impact from the two players coming from the bench, very similar to against [Thursday's opponents] Plovdiv, I love the player who comes from the bench with a special attitude to help the team.

"Son was on fire, Harry Kane I know people will tell me I'm silly in my analysis but for me, Harry Kane was man of the match because of what he did for the team."

"I believe in Tanguy." So said Jose Mourinho after the midfielder came off the bench to score the winner in Tottenham's Europa League tie with Lokomotiv Plovdiv on Thursday. But his half-time withdrawal against Southampton leaves his place in the manager's plans in doubt once again.

Ndombele was far from their worst performer in the first half at St Mary's Stadium. In fact, it was his moment of inspiration, spinning away from his man in midfield before feeding Harry Kane, which led to Heung-Min Son's equaliser moments before the break. There had been another excellent through-ball to release the South Korean in the early stages.

Mourinho evidently saw things differently, but it is difficult to pinpoint why. There was little in the statistics to cause alarm. Ndombele only completed 68 per cent of his passes, but that was in fact higher than Tottenham's average. He won a higher percentage of duels than any of his team-mates.

Mourinho's decision to thrown on Giovani Lo Celso was perhaps vindicated by the Argentine's role in Son's second and fourth goals. There will be no complaints about the final scoreline either. But his treatment of a resurgent Ndombele will still leave plenty of Spurs supporters scratching their heads.

"Football is not just about one action," explained Mourinho afterwards. Ndombele was living dangerously because of his yellow card, the Spurs boss added, but it was his comment on the 23-year-old's fitness which felt most pertinent. "I knew Gio would give us a little bit more because he's in a better condition than Tanguy," he said.