Match report as Jan Bednarek's first-half goal prevented Arsenal from closing the gap on fourth-placed Tottenham; Fraser Forster made a string of fine saves to keep a clean sheet; watch free highlights on the Sky Sports app and website from 5.15pm 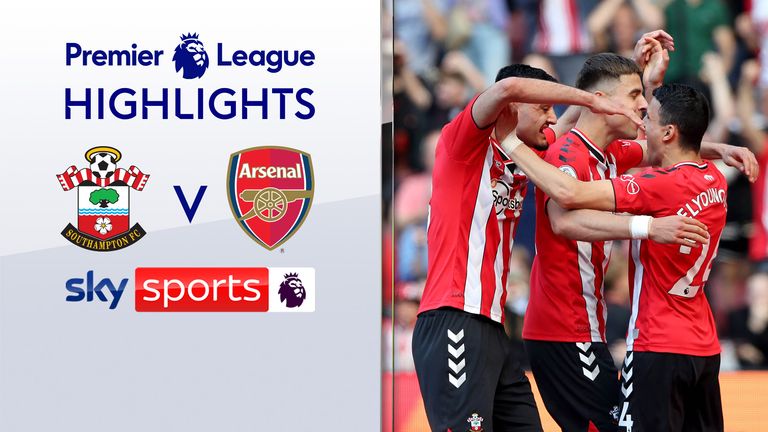 FREE TO WATCH: Highlights from Southampton’s win against Arsenal in the Premier League

Arsenal failed to take the opportunity to close the top-four gap as Jan Bednarek's first-half goal plus an inspired display from goalkeeper Fraser Forster gave Southampton a 1-0 victory.

The Gunners knew a victory would move them level on points with rivals Tottenham, who lost 1-0 at home to Brighton earlier in the day, but they could not find a way past Forster and instead suffered their third consecutive defeat.

Bednarek gave Southampton the lead a minute before half-time after the Saints 'keeper had brilliantly denied Bukayo Saka from scoring early on.

The 34-year-old then made a string of fine saves in the second half, with Arsenal striker Alexandre Lacazette missing after testing positive for Covid, to give the hosts their first victory in six matches.

Gabriel Martinelli forced the first save from Forster in the ninth minute when he cut in from the right and sent a bending shot towards the far corner which the goalkeeper parried away.

But Forster's best stop - and perhaps of the season - came from a Southampton mistake inside their own half. Yan Valery telegraphed his pass into Lyanco allowing Eddie Nketiah to intercept and he moved the ball out to Martinelli, who crossed for Saka but his close-range effort was wonderfully pushed behind by the right hand of Forster.

Southampton: Ralph Hasenhüttl made changes to both personnel and formation following last week’s demolishing at the hands of Chelsea.

Yan Valery came into a back three, with Kyle Walker-Peters and Romain Perraud operating as wing-backs.

Arsenal: Alexandre Lacazette was not in the squad after testing positive for Covid so Eddie Nketiah started up front.

Nuno Tavares was the second change from their defeat against Brighton at left-back with Emile Smith Rowe dropping to the bench.

Nuno Tavares returned to the Arsenal team at left-back for the first time since he was hauled off at half-time against Crystal Palace earlier this month. He had a solid 70 minutes and drew two fouls in the Southampton final third during the first half, the second resulting in Cedric Soares firing the set piece over when crossing into the box was the better option.

Arsenal dominated possession with Southampton unable to launch any meaningful counter-attacks in their new-look 3-4-3 formation, but they grabbed the opener a minute before half-time through an unlikely source. Arsenal cleared James Ward-Prowse's corner but then switched off when it was recycled into the area by Romain Perraud. Mohamed Elyounoussi turned the ball back for Bednarek, who finished coolly first time as Ramsdale got a hand to it but could not keep it out.

Man of the match: Fraser Forster

Arsenal have won just four points from losing positions this season - only Wolves (3) have taken fewer - and at the start of the second half it was clear the trend was set to continue. Perraud was denied making it two by an excellent block from Ben White after burrowing his way into the area.

Emile Smith Rowe's introduction on the hour was much-needed for Arsenal with the midfielder instantly breaking onto a loose ball in the Southampton area but saw his shot blocked by Martinelli.

Then Smith Rowe was brilliantly denied by Forster as the Southampton 'keeper clawed away his close-range volley before he saved again from Saka which led to Martin Odegaard firing the follow-up wide. There was still time for Forster to push away a curling effort from Granit Xhaka late on.

Arteta: We need to find a way to win 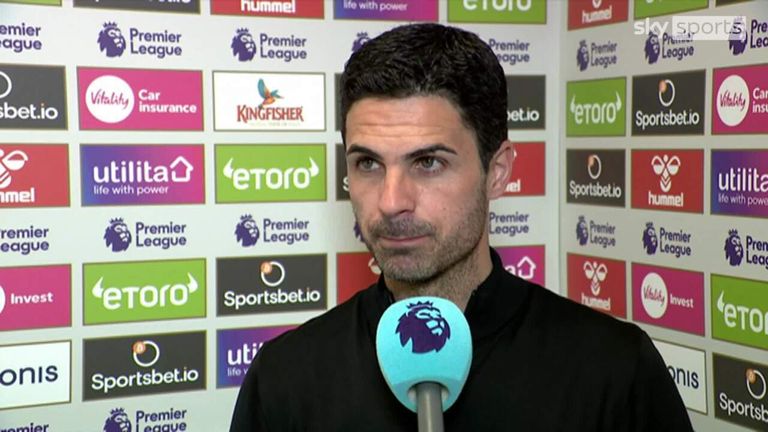 Arsenal manager Mikel Arteta: "It is difficult to explain because this is football, not basketball. In any other sport you win the game very comfortably. 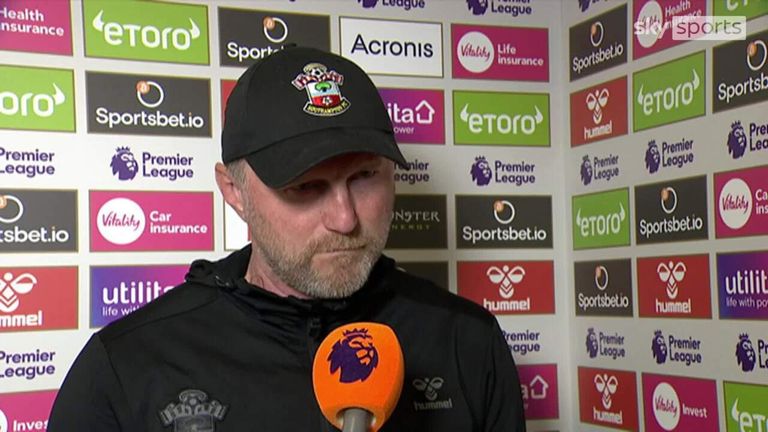 Southampton boss Ralph Hasenhuttl described Fraser Forster's performance as 'amazing', after pulling off a string of impressive saves to keep Arsenal at bay

A relieved Ralph Hasenhuttl was delighted his side could break their six-game winless streak to emerge victors over faltering Arsenal, who failed to score despite registering 23 attempts on goal.

Saints delivered an uncharacteristic display in the wake of last week's 6-0 mauling by Chelsea - opting to concentrate on defensive resilience in favour of their usual pressing style.

"We knew that it was time to show a reaction," the Austrian said. "And to show that we also can play a little bit different. Today was a different game; under 30 per cent possession I don't think we've ever had in this season so far. We didn't want to give them a chance for an early ball in. We wanted to be compact.

He reserved a word of praise for the performance of Forster, who is out of contract at the end of this season, but proved invaluable against Arsenal's armoury: "A goalkeeper who was exceptional today. Not to forget, because otherwise, it looks different.

"Great to get such a reward for such a game. This is absolutely exceptional. I'm very happy for him. He plays for winning with Southampton and definitely for staying with us."