Match report and free highlights as Brighton beat Southampton 3-1 at St Mary's on Boxing Day; Adam Lallana and a Romain Perraud own goal gave Brighton a 2-0 half-time lead; Solly March's stunner after the break made it 3-0 before James Ward-Prowse scored consolation for Southampton 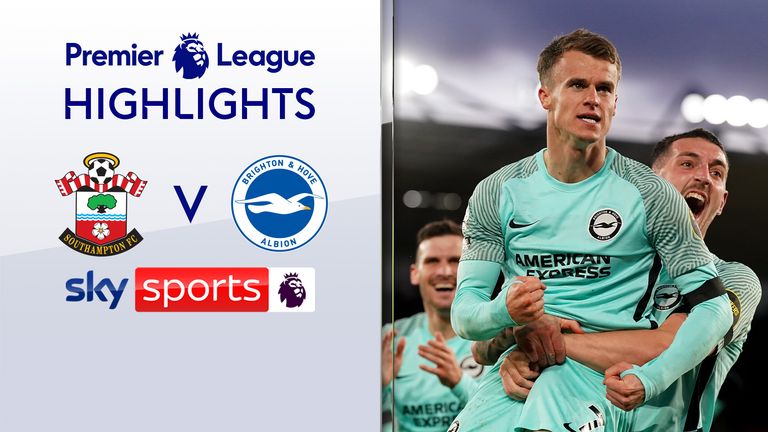 FREE TO WATCH: Highlights of Southampton against Brighton in the Premier League.

Southampton manager Nathan Jones' first Premier League home game ended in a 3-1 defeat as his side slipped to the bottom of the table after being outclassed by Brighton at St Mary's.

Having taken charge of Southampton just twice since his appointment on November 10 due to the break for the World Cup, Jones was hoping to oversee back-to-back wins after Tuesday's narrow victory over Lincoln, but his players produced a disappointing performance on Boxing Day.

Brighton, who welcomed back several stars from the winter tournament in Qatar, looked authoritative throughout and took control of the scoreline in the first half thanks to some calamitous Southampton defending.

Former Saints captain Adam Lallana put Brighton ahead on 14 minutes when he smartly headed in Solly March's inswinging cross, although Gavin Bazunu somehow managed to let the ball slip through his hands. Ten minutes before half-time Brighton made it two when Romain Perraud bundled a Pervis Estupinan cross into his own net (35).

Southampton, who were loudly booed off at the break, improved at the start of the second half but March soon restored Brighton's dominance when his stunning left-footed strike from outside the box whistled past Bazunu to give the visitors a deserved 3-0 lead (56).

Southampton did pull a goal back when James Ward-Prowse nodded in the rebound after his initial penalty had been saved by Robert Sanchez (73), but the hosts had given themselves too much ground to make up.

The game finished 3-1 and the result was a firm indicator of the situation both teams find themselves in. Brighton are seventh and now just two points behind fifth-placed Manchester United, while Southampton drop to the bottom of the table following Wolves' 2-1 win at Everton.

Player of the match: Solly March.

Former Luton manager Jones was forced to wait almost seven weeks for his first taste of top-flight action on home soil, having replaced the sacked Ralph Hasenhuttl just two days before a 3-1 loss at Liverpool on November 12.

Things quickly turned sour for the Welshman on an afternoon when his listless team were jeered off at the end of each half.

The Seagulls midfielder turned neatly deep inside Saints' territory and then played the ball wide to March before darting into the box to direct the subsequent inswinging cross through the arms of the keeper.

Former England international Lallana, who left Saints for Liverpool in 2014 having joined the club's academy aged 12, was booed in the early stages but his celebration was subdued.

Southampton manager Nathan Jones made three changes from the side that narrowly beat Lincoln in the Carabao Cup on Tuesday.

Theo Walcott was ruled out through injury after being forced off against Lincoln with a tight calf.

Brighton head coach Roberto De Zerbi made five changes after his side were dumped out of the Carabao Cup on penalties by League One Charlton on Wednesday.

Argentina World Cup winner Alexis Mac Allister was not available for the trip to St Mary's.

Southampton returned to action following the World Cup with the worst home record in the division and the avoidable opener swiftly prompted grumblings of discontent in the stands.

Captain Ward-Prowse flashed a free-kick narrowly wide to offer some encouragement before the hosts fell further behind in catastrophic fashion as the mood continued to darken around St Mary's.

Saints' defence had struggled to contain Estupinan and Kaoru Mitoma on Brighton's left from the first whistle and 10 minutes before the break they combined for the former to deliver a tantalising low cross which Perraud clumsily directed into his own goal under pressure from March.

Southampton began the second period with greater purpose and Samuel Edozie twice threatened, but March soon halted any notion of a home revival by cutting in from the right to smash a stunning drive into the top left corner from around 25 yards.

As Southampton supporters watched on with gloomy expressions, Brighton's capacity travelling section revelled in their side's scintillating display, with chants of 'the south coast is ours' followed by ones about the possibility of a European adventure next season.

Saints finally gave themselves some hope when the lively Edozie was felled in the box by Pascal Gross. Sanchez, who was booked for delaying of spot-kick, saved Ward-Prowse's initial strike after diving to his right but was powerless to repel the follow-up effort.

The Spain international later risked a second yellow card following a clash with Che Adams before Brighton coasted to success on another chastening day for Southampton.

Jones to 'work religiously' on shortcomings

Nathan Jones vowed to "work religiously" on Southampton's shortcomings after his struggling side slipped to the bottom of the Premier League on the back of an error-strewn 3-1 loss to Brighton.

"We gifted them two goals today and then that gives them confidence to do what they do and they keep the ball very well," said the Welshman, whose team were jeered off at the end of each half.

"We never really gave ourselves a chance of winning. We didn't do the basics well enough and didn't deserve anything from the game.

"We have to make sure we have a foothold in the game and at the minute we're not giving ourselves a chance.

"Goals change games, goals change momentum, goals change attitudes, and that's what happened today. We need to do certain things better and we will work religiously on that."

Brighton boss Roberto De Zerbi hailed the best display of his tenure after his team tightened their grip on a top-half spot.

The scintillating away performance prompted chants of "the south coast is ours" from the sold-out away end.

"For the quality of play, the strategy of game, it was a fantastic day," said the Italian.

"For me, the most important is not the result, it's how much my players follow me. I'm very happy. We played probably the best game with me as a coach. We are improving."

Southampton travel to Fulham in the Premier League on December 31 (kick-off 3pm) before welcoming Nottingham Forest to St Mary's on January 4 (kick-off 7.30pm).

Up next for Brighton is a home match against Arsenal in the Premier League on December 31, a game available to watch live on Sky Sports (kick-off 5.30pm). The Seagulls then travel to Everton on January 3 (kick-off 7.45pm).