Report as Celtic are once again beaten 4-1 by Sparta Prague, with Lukas Julis scoring twice to heap yet more pressure on under-fire Hoops manager Neil Lennon, whose side have been knocked out of Europe after this latest defeat

Celtic are out of the Europa League with two group games to spare after Lukas Julis' double helped Sparta Prague come from behind to win 4-1 in Prague.

Things had looked promising for Celtic when the returning Odsonne Edouard gave them a 15th-minute lead in the Czech capital after a brilliant solo run and finish.

However, Sparta took control thereafter, levelling matters through David Hancko's close-range finish (26), before Julis - who netted a hat-trick in his team's 4-1 win at Parkhead - scored in each half (38, 80) to put the game out of reach.

Substitute Srdjan Plavsic then wrapped up the win in stoppage time (90+4) as he rounded Scott Bain to score.

As a result, winless Celtic are out of the competition, with two of Lille, AC Milan and Sparta guaranteed to surpass the maximum of seven points which Neil Lennon's side can now achieve in Group H.

How Celtic crashed out of Europe

Celtic manager Neil Lennon arrived at the Generali Arena under pressure with his side having won just twice in their previous eight games, a dreadful run which has also seen them keep just one clean sheet in that time.

The visitors knew, therefore, that nothing less than the three points was needed against a Sparta team who had won 4-1 at Parkhead last time out, and they got off to the perfect start thanks to Edouard's fine individual strike.

Edouard still had a lot to do after being found by Mohamed Elyounoussi as Celtic launched a swift counter, only for the France U21 international to turn his marker inside out in the box, before cutting back inside and finishing off the inside of the far post.

Far from settling Celtic down, however, that strike appeared to spur their opponents on, with the hosts hitting back with two goals before half-time, both avoidable.

Hancko brought his team level after Celtic failed to clear a corner, before Julis found himself all alone at the far post to steer home Borek Dockal's inviting cross seven minutes before half-time.

Celtic made four changes to the side that drew with Hibernian on Saturday, with Christopher Jullien, Olivier Ntcham, Odsonne Edouard and Hatem Elhamed all recalled. And that meant Tom Rogic, Nir Bitton, Albian Ajeti and Jeremie Frimpong dropped to the bench, while Scotland forward Leigh Griffiths missed out through injury.

Despite all Celtic's probings after the interval they were always in danger of being caught on the break, which is exactly what happened with 10 minutes to go as David Moberg Karlsson picked out his unmarked strike partner in the box, with Julis doing the rest.

Plavsic made it a rather flattering final scoreline after another counter in injury-time, although by then Celtic's European fate had already been sealed.

Karlsson was a thorn in Celtic's side all night long, running the visitors' defence ragged in the first period, before setting up Sparta's crucial third goal for fellow frontman Julis.

In fact, Celtic's players could barely lay a glove on the 26-year-old for most of the first 45 minutes and then when the game opened up in the second half as the visitors chased an equaliser, the Swede bided his time, before laying a goal on a plate for that man Julis to end the match as a contest

Neil Lennon: "I know this group better than anybody. I remember at the end of last year when we lost to Rangers, everyone writing us off and we were getting slaughtered from all and sundry, be it our own supporters or everyone else in the game, saying the league was over.

"So we have been here before and we put a great run together in the second half of the season.

"It feels a little bit different, like we have a little bit more work to do but we are quite confident we will turn it around again.

"We have a lot of work to do catching up in the league but it is not beyond us, far from it. 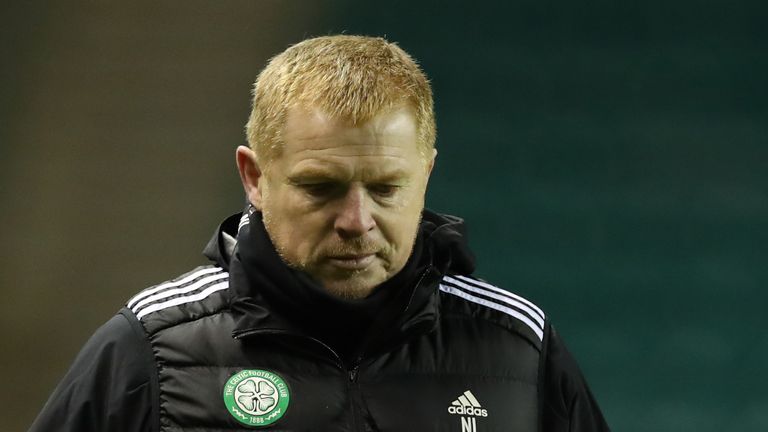 "I have been in situations like this as a manager and a player. There is no reason to believe we won't turn it around.

"We're bitterly disappointed with the run we are on but we know we have the minerals to turn it around.

"We know we have to turn it around quickly but it is something that is not going to happen overnight, but I am pretty positive.

"We are out of Europe so we have to concentrate on domestic duties now, and the league is the priority."

Sparta host Teplice in the league on Sunday afternoon, while Celtic take on Ross County at Parkhead in the Scottish League Cup on the same day, with the game starting at 2pm.