St Mirren 0-1 Dundee: Dark Blues bounce back from midweek mauling for their first away win

Match report as Dundee pull clear of rock-bottom Ross County with a crucial three points; Max Anderson scored the only goal of the game for the Dark Blues 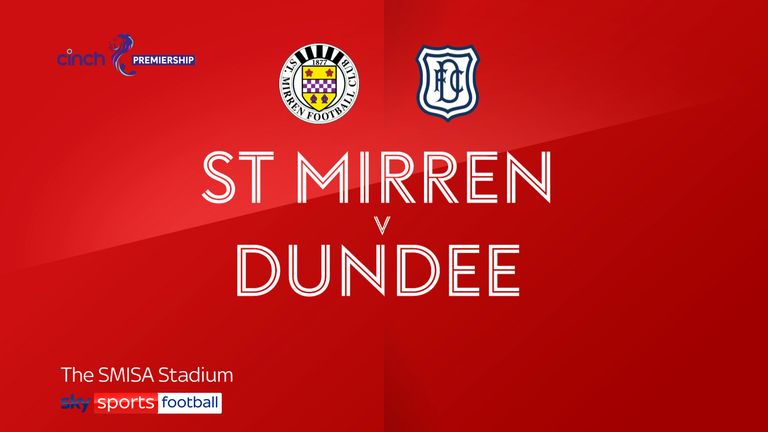 Highlights from Paisley as Max Anderson helps Dundee seal their first away win in the Scottish Premiership this season.

Dundee bounced back from their 5-0 midweek defeat against Ross County to claim a first league away win of the season at St Mirren.

Max Anderson's 11th-minute strike proved to be the only goal of the game with the Dark Blues holding firm throughout the second half as Jim Goodwin's men chased an equaliser that never came.

St Mirren were unchanged from the side that drew with Motherwell in midweek, with last season's top scorer Jamie McGrath still unavailable through injury.

The home side had the first noteworthy chance of the game, with Adam Legzdins making a strong save to keep out Marcus Fraser's header.

A minute later and Dundee were in front. Paul McMullan touched the ball to Anderson and he side-footed a shot past Jak Alnwick into the bottom corner.

It could have been 2-0 shortly afterwards only for Conor McCarthy to make a goal-line block after Paul McGowan had been allowed to run in on goal.

Saints responded with an Eamonn Brophy shot that was saved for a corner. And from the resultant Connor Ronan delivery, McCarthy headed wide at the back post.

Scott Tanser then hit the top of the crossbar from another St Mirren corner before only a brave block from Fraser denied McMullan at the other end.

Luke McCowan was next to try his luck, running in on goal before drilling in a low effort that was saved by Alnwick as Dundee went up the tunnel at half-time still a goal to the good.

St Mirren threatened first in the second half but Curtis Main's volley from Tanser's cross was well wide.

The home side thought they should have had a penalty following Ryan Sweeney's challenge on Brophy but referee John Beaton felt otherwise.

Dundee then lost Cillian Sheridan after he fell to the turf and needed to be carried off on a stretcher, his replacement the former St Mirren striker Danny Mullen.

Another former Buddie, Charlie Adam, nearly caught out Alnwick with a dipping free-kick that had the goalkeeper scrambling back to tip away.

Saints responded with a Ronan drive that lacked the power to beat Legzdins, before substitute Kristian Dennis lashed a shot into the side-netting.

McMullan appealed hopefully for a penalty after running into Fraser but was turned away, before Tanser had one last chance that was saved as St Mirren ran out of ideas.

St Mirren manager Jim Goodwin: "It's very frustrating to lose the goal in the manner we did from our corner. We didn't get out shape back and it's a poor goal.

"After that we dominated possession, but the only stat that matters is that end result. Sometimes you have afternoons like that. We could still be playing now and not have scored."

Dundee manager James McPake: "I'm delighted for the players more than anything. They were hurting as much as anyone and you saw that.

"They deserved their three points. We used Wednesday as motivation. It was going to take a lot and we gave a lot. This is a great result."