Match report and highlights as St Mirren fail to convert any of their 24 shots; Ross County also had a number of opportunities, but neither side were able to find the net 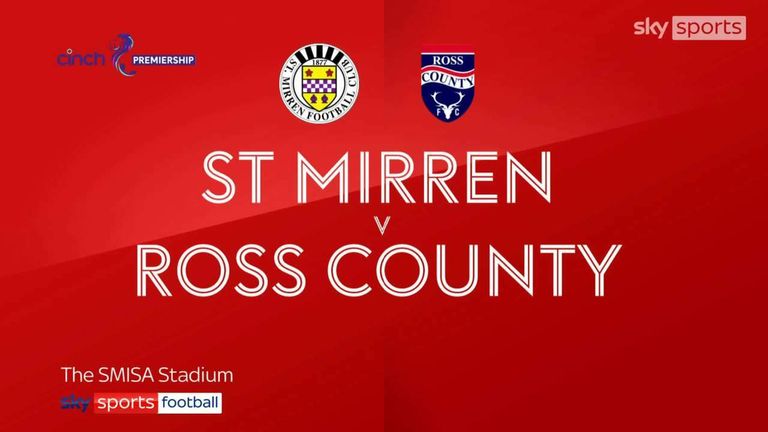 Highlights of the SPFL match between St. Mirren and Ross County

St Mirren passed up a series of second-half chances in a goalless draw with Ross County – the Paisley side’s eighth stalemate of the season.

County also had a number of opportunities early in the game and could have snatched the three points with a late break.

However, the home side were left to rue more missed opportunities after failing to convert from 24 efforts at goal, compared to the visitors' 12.

County had the better of the opening exchanges, getting the ball in space in the final third as St Mirren adjusted to the loss of Joe Shaughnessy through suspension. Richard Tait had dropped into the back three.

Blair Spittal twice threatened from the edge of the box before Joseph Hungbo and Harry Paton forced decent saves from further out.

Their best first-half chances fell to Dominic Samuel, who was making his first start since July.

The striker did everything right from the first opportunity after a long ball put the Buddies in trouble, but stand-in captain Jak Alnwick produced a brilliant diving stop. Samuel later did well to make space for himself in the box but shot high and wide.

St Mirren improved as the half progressed. Connor Ronan saw a powerful strike saved and Eamonn Brophy had an effort cleared from the goalmouth before failing to get a proper shot away with County defender Alex Iacovitti down injured and about to be taken off for Keith Watson.

Samuel forced a save from Alnwick near the start of the second half after failing to make the most of Hungbo's cross but Saints were having most of the play.

The home side's chances were regular and often clear-cut. Kristian Dennis headed wide from eight yards and shot weakly straight at Ashley Maynard-Brewer from even closer in.

Brophy shot straight at the goalkeeper from a decent chance, Ronan had a dangerous effort pushed wide and Maynard-Brewer made a brilliant stop with his foot from Curtis Main's volley moments after the striker had come on.

Maynard-Brewer pushed over Greg Kiltie's effort and County centre-backs Baldwin and Watson combined to stop Main's shot finding the net after the sub was played clean through.

County almost won it on the break with two minutes left but Alnwick made an excellent double stop from Spittal and Paton.

St Mirren manager Jim Goodwin: "I don't think there will be a team in the league tonight that have had more attempts on goal than we had.

"Of the 25 or so shots, nine or 10 of those are on target. You could give credit to the opposition and say the goalkeeper has made a couple of decent saves and the defenders have made some good blocks.

"But if you don't put the ball in the back of the net, it's very simple, you don't win games of football.

"We have had eight draws out of 16 games and of those eight I can think of four off the top of my head which we should have won comfortably. I can't keep saying the same thing time and time again.

"I give credit to the players. The first half was terrible, a really poor spectacle from both teams. The second half I thought we were excellent and so on top.

"County did look a threat in the last 10 minutes on the break because of the amount of bodies we were committing forward. But it's a far better point for Ross County than us because we should have been out of sight."

Ross County manager Malky Mackay: "I thought first half we had a real good go at them and had the better chances. I think Jim would accept that.

"After half-time they came out really strongly at us and we had to defend for our lives.

"We had some calm heads and made some chances near the end. So for the layman, probably a really good game."

St Mirren travel to Aberdeen, while Ross County visit St Johnstone, with both Scottish Premiership games kicking off at 3pm on Saturday.