Match report and free highlights; Brentford, who made seven changes for the tie, will now wait to see who they will face in the last eight when the draw is made on Soccer AM, live on Sky Sports from 10.30am, on Saturday. 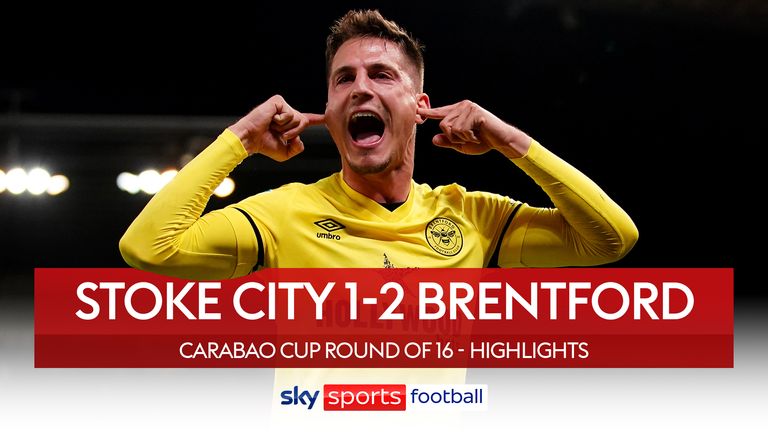 Highlights of the Carabao Cup Fourth Round match between Stoke City and Brentford.

Brentford moved into the Carabao Cup quarter-finals as first-half goals from Sergi Canos and Ivan Toney secured a 2-1 win at Stoke.

Canos struck the opener in the 22nd minute and Toney added a second for the visitors - who reached the semi-finals of the competition last season - with a 40th-minute finish.

Former Brentford man Romaine Sawyers pulled a goal back in the 57th minute, but Michael O'Neill's Stoke were unable to save themselves from elimination as their losing streak continued after three successive defeats in the Championship.

Brentford will now wait to see who they will face in the last eight when the draw is made on Soccer AM, live on Sky Sports from 10.30am, on Saturday.

It was a return to winning ways for Thomas Frank's Bees, meanwhile, following the back-to-back Premier League losses against Chelsea and Leicester.

Frank made eight changes to his starting line-up from the Leicester match, with Toney, Canos and Mathias Jensen the trio retained.

Toney - skipper for the night - was just unable to divert a cross past Joe Bursik on the stretch in the second minute of the contest, and Marcus Forss sent an effort wide of the Stoke goal from a good position in the 17th minute.

As Brentford applied further pressure, Toney saw one strike blocked, then Canos had another turned behind by Bursik.

And when the resulting corner was delivered, Forss gave the ball to Toney, whose lay-off was drilled in from the edge of the box by Canos, with Sawyers unable to stop the shot on the line.

Stoke, whose starting XI showed five adjustments, subsequently registered their first real attempt just before the half-hour mark as Steven Fletcher brought a save out of Alvaro Fernandez.

The hosts were then punished for losing possession towards the end of the half, with the ball being worked via Saman Ghoddos to Forss and then Toney, who slotted past Bursik for number two.

Brentford soon threatened again after the break as Bursik parried a Toney strike and saw Jensen put a follow-up attempt across the face of goal.

O'Neill then brought on Mario Vrancic for Alfie Doughty and within moments the Bosnian had helped reduce the deficit as he delivered a corner from the left, the ball came to Sawyers and he crashed a shot home against his old club in fine style.

As Stoke pushed for a leveller, Vrancic shot too high and substitute Abdallah Sima sent a header just wide of the far post - which proved the closest they would come.

At the other end, Brentford substitutes Frank Onyeka and Rico Henry saw efforts blocked and go over respectively.

Toney and Tariqe Fosu-Henry, another substitute, then each had good chances to wrap things up late on, only be thwarted by good Bursik saves - before the final whistle confirmed Frank's men had done enough for a last-eight spot.

Stoke boss Michael O'Neill: "We were very disappointed with the performance first half. We got penned in by Brentford, whose pressure was excellent, but we made poor decisions in terms of how to get out, and then we were too passive I thought.

"The nature of the two goals was very poor to lose, and we didn't have enough belief really in ourselves to take the ball and play and get ourselves up the pitch with any real quality on a regular basis.

"Second half we had a lot of territory, the ball was in their half a lot, we got the goal back, it was a good reaction.

"We had strong words at half-time and to be fair to the players they gave us a good reaction, and we just couldn't force the second goal and try to take the game to penalties."

Brentford boss Thomas Frank: "I was very pleased. I think it was actually a very impressive first half. I'm pleased with the attitude, the discipline, the intensity.

"We played with very good intensity in our pressure, we created chances and we scored two really good goals - so first half, bang on.

"They score, (then it's) probably a little more scrappy, a little more second-ball game. We handled that well because we gave nothing away, and we still created three or four big chances. I think it was a massive win."

What's next for Stoke and Brentford?

Burnley host Brentford in the Premier League on Saturday at 3pm while Stoke host Cardiff City in the Championship at the same time.