By Ben Grounds at the Tottenham Hotspur Stadium 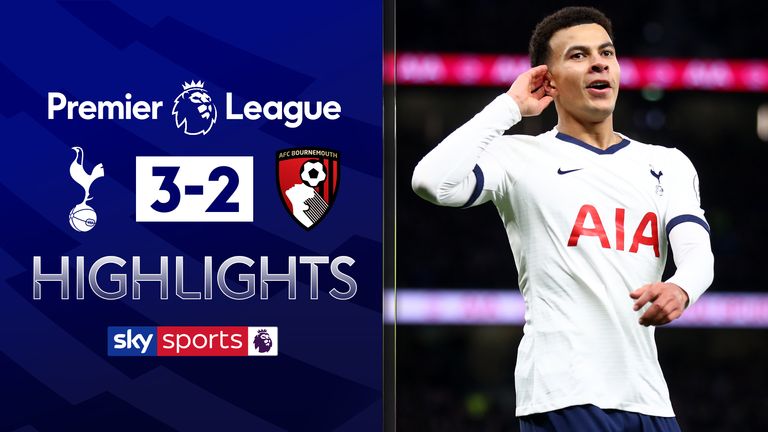 FREE TO WATCH: Highlights as Tottenham beat Bournemouth in the Premier League

Tottenham's resurgence under Jose Mourinho continued as Dele Alli scored twice in a thrilling 3-2 win over Bournemouth in the Premier League.

Spurs were cruising with 20 minutes remaining when, following on from Alli's double (21, 50), Moussa Sissoko finished off a sweeping move to make it 3-0 (69).

But, for the second week running, Mourinho's men had to withstand a late fightback as Harry Wilson scored twice (73, 90+6) for the Cherries.

Callum Wilson was then denied a dramatic equaliser by a vital challenge from Jan Vertonghen as Tottenham held on to move up to fifth, while Bournemouth drop to 12th after a third straight league defeat.

"I'm happy with many things in the game, but I think we have to improve other aspects - it's normal," Mourinho said after a third straight win. "We didn't start well again, we didn't finish well. We played well for a long period in the game, and I'm pleased with the victory, the points, with the flair, with the quality and with the goals."

Man of the match: Dele Alli.

Bournemouth were quickest out of the blocks as Arnaut Groeneveld was denied by a smart save from Paulo Gazzaniga after just four minutes, and the stand-in Spurs goalkeeper had to be alert once more to deny Diego Rico from distance as Eddie Howe's side impressed in the same way Olympiakos had during the opening 20 minutes in midweek.

But, from Tottenham's first meaningful attack, Alli broke the deadlock as Heung-Min Son controlled Toby Alderweireld's long ball into the path of the in-form midfielder to slide his finish beyond Aaron Ramsdale. Five minutes later, Spurs were denied a quickfire second as Harry Kane played a one-two with Son but his shot was saved by the legs of Ramsdale at his near post.

Davinson Sanchez then saw his strike correctly ruled out for handball after controlling Sissoko's shot with his arm, and Bournemouth very nearly took full advantage of the reprieve as Jack Stacey ventured forward and bent a shot narrowly wide.

Danny Rose, Harry Winks and Lucas Moura dropped to the bench from the side that beat Olympiakos 4-2 in the Champions League as Jan Vertonghen was selected at left-back, while Tanguy Ndombele and Moussa Sissoko came into the midfield.

Jefferson Lerma replaced the absent Philip Billing in midfield in one of four changes. Arnaut Groeneveld, Jack Stacey and Dominic Solanke were all selected as Adam Smith, the suspended Simon Francis and Harry Wilson dropped out.

But Tottenham took control of the encounter five minutes into the second period as another measured pass out from the back by Alderweireld found Alli, and he made no mistake in lifting his finish above Ramsdale.

Mourinho's men were now in full flow, and Bournemouth had no response to a brilliant third, with Alli the architect this time. He found Son free down the left, and the South Korean put the ball on a plate for Sissoko at the far post to lash his volley back across goal.

Bournemouth needed to dig deep to avoid a heavy defeat, and their fightback began four minutes later as substitute Harry Wilson's free-kick beat Gazzaniga via the underside of the crossbar. Son ought to have put the game beyond the visitors when he dallied on his finish after being released by Alli, and it might well have proved costly.

In the sixth minute of stoppage time, Harry Wilson added his second from Groeneveld's cutback, but the hosts held on to move six points behind Chelsea in the final Champions League place.

Tottenham boss Jose Mourinho: "Of course in the Premier League, games are never finished and even in our best period where everybody had a feeling that the result could go for four or five because we had so many opportunities on the transition to score more goals, then the result is a bit strange.

"But that's the difficulty and the emotion of the Premier League. I could say we conceded four goals in four days at home, but I prefer to say we scored seven which is fantastic." 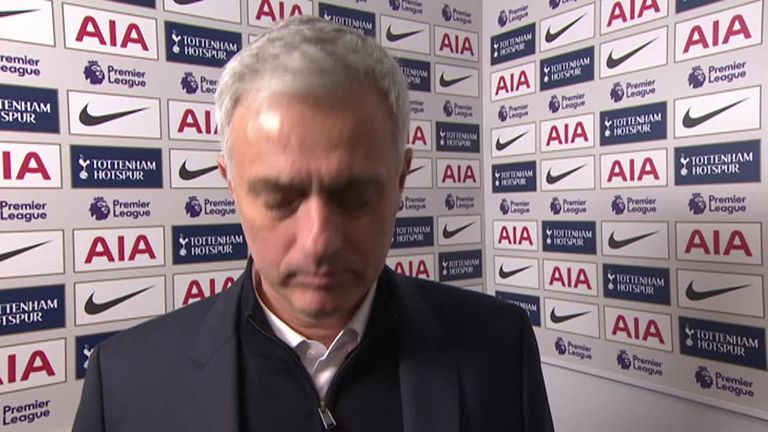 Jose Mourinho feels Dele Alli is close to rediscovering his best form after scoring twice in Tottenham's 3-2 win against Bournemouth.

Bournemouth manager Eddie Howe: "The key moments were the first two goals in the game. We had to defend those two situations better and we didn't. We paid the ultimate price for it.

"The lads gave a great effort to come back and show the character needed because 3-0 down was a difficult moment for us. We had a chance to get a point right at the end, so I thought we played well in general. But the first two goals killed us."

Man of the match - Dele Alli

It has been an eventful start to Mourinho's Tottenham reign but there is clearly more optimism now than there was a week ago. As the Jose effect continues to trickle through, Alli has benefited more than anyone - and his revival continued here.

The Portuguese was ashen-faced on the sidelines 15 minutes into his first home game in the Champions League this week, and he will be concerned by his side's unwanted habit of making hard work of routine wins.

But, before the late drama, Alli was the outstanding performer, having more shots (5) than any other player. The midfielder has been directly involved in three goals in his two Premier League games under Mourinho (2 goals, 1 assist), as many as he managed in his last 12 under Mauricio Pochettino.

He ought to have taken home the match ball but he gave up the chance for his hat-trick, although he deservedly earned a standing ovation when he was withdrawn with two minutes of stoppage time remaining. 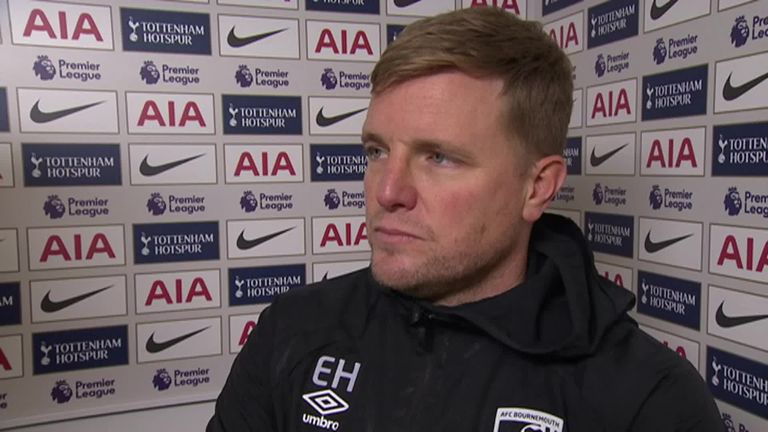 Bournemouth manager Eddie Howe says his team left themselves with a mountain to climb after going 3-0 down in their 3-2 defeat to Tottenham Hotspur in the Premier League.

Tottenham travel to face Manchester United at Old Trafford on Wednesday (kick-off: 7.30pm). Meanwhile, Bournemouth will return to London to take on Crystal Palace at Selhurst Park on Tuesday at the same kick-off time.