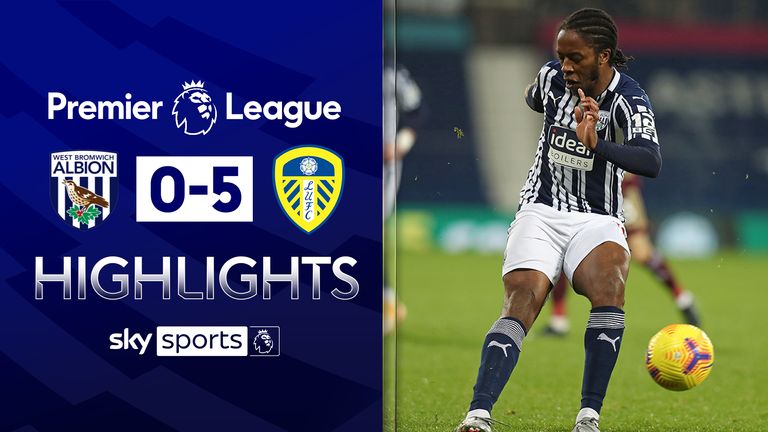 FREE TO WATCH: Highlights from Leeds’ win at West Brom in the Premier League

Leeds ran riot at The Hawthorns, thumping relegation-threatened West Brom 5-0 as they continued their climb up the Premier League table.

Marcelo Bielsa's side were sent on their way by a gift from Albion's Romain Sawyers (9), whose back pass beat goalkeeper Sam Johnstone, before goals from Ezgjan Alioski (31), Jack Harrison (36) and Rodrigo (40) saw the visitors into the break with a commanding lead.

Raphinha put the finishing touch on Leeds' night in the 72nd minute with an emphatic strike on what was a chastening evening for West Brom and new boss Sam Allardyce, who is still looking for his first win in charge at The Hawthorns.

The victory sees Leeds, who kept back-to-back clean sheets and claimed their biggest Premier League win for 17 years, move up to 11th in the table on 23 points, while West Brom stay 19th, five points adrift from safety.

How Leeds claimed their biggest Premier League win for 17 years…

West Brom's difficult night started as early as the ninth minute when Sawyers suffered a nightmare moment. The midfielder attempted to pass the ball back to his goalkeeper but did not look where he was.

Man of the match: Ezgjan Alioski

Johnstone was stranded to the left of his goal and could only watch on as Sawyers' pass rolled into the empty net to gift Leeds the lead.

Alioski emphatically doubled Leeds' advantage, leaving Johnstone with no chance again by thumping a left-footed drive in off the post from just inside the area.

Five minutes later, Leeds had a third thanks to a beautiful team goal. Harrison exchanged passes with Patrick Bamford before cutting inside Darnell Furlong and finding the top corner from close range.

Leeds were running riot and they added a fourth just before the break. Kalvin Phillips' inch-perfect diagonal pass picked out Mateusz Klich, who rolled the ball into the path of Rodrigo. His shot from the edge of the area hit Dara O'Shea and deflected past a stranded Johnstone.

It was a case of damage limitation in the second half for West Brom as Allardyce brought on Branislav Ivanovic for Matt Phillips as the hosts switched to a back three.

They almost pulled a goal back when Illan Meslier gifted possession to Grady Diangana early in the second half, but the goalkeeper redeemed himself with an important block.

Despite that early blip, Leeds remained in firm control and they rounded off their victory in emphatic style with 18 minutes left.

Raphinha wrapped up a sweeping move on the right, cutting inside and finding the top corner from the edge of the box to seal their biggest victory in the top flight since a 6-1 win over Charlton in 2003.

West Brom boss Sam Allardyce: "Things can happen like that [the own goal], they are unexpected but when they do happen, they have to pick themselves up and fight, be determined.

"Leeds are a tremendous side, I think they are brilliant, but we've seen a performance like that against Liverpool and then we can't do the defending right tonight.

"Leeds overran us, won 5-0 and they deserved it. I was shocked to see such a poor performance and we have to work hard to put it right. Consistency is everything for us. We can't seem to get a consistency of attacking and defending right."

"Life will get difficult if we can't get results quickly. We need to make sure we don't dish up another performance like that. Liverpool was fantastic, but this was dreadful, unfortunately."

Leeds boss Marcelo Bielsa: "It was a game where we defended well and we were efficient up front. From eight chances we scored five and that helped the result.

"We played a serious game throughout and we managed the ball well, not committing any errors for them to attack us, apart from a few cases in the second half.

"We have to keep doing the same and keep doing it over a longer period of time. We have had a lot of highs and lows, only two games ago we had an important defeat and our idea is to play in a consistent manner."

Man of the match - Ezgjan Alioski

Alioski put in an all-action display down the left for Leeds, causing West Brom all sorts of problems when he got forward.

He got his reward for a fine performance with a superb goal, leaving Johnstone absolutely no chance with a thumping strike which went in off the post.

Next up for West Brom in the Premier League is the visit of Arsenal on Saturday January 2; kick off 8pm.

Leeds' next league assignment, also on Saturday, is a trip to the Tottenham Hotspur Stadium to face Tottenham; kick-off 12.30pm.