Report and highlights as Watford and Bournemouth's winless runs continued Watford remain bottom of the table and without a win in the Premier League this season following a frustrating 0-0 draw with Bournemouth at Vicarage Road.

Both sides created good chances in the opening stages, Abdoulaye Doucoure firing over from close range before Steve Cook's header rattled the crossbar.

Watford needed Ben Foster to deny Diego Rico and Arnaut Groeneveld just before half-time, while Aaron Ramsdale had to be at his best to keep out Gerard Deulofeu's individual effort after the interval.

The sides have now played out seven draws in their nine recent meetings in the Premier League.

Foster and Ramsdale exchanged further saves late on to deny Will Hughes and Ryan Fraser respectively, leaving both sides with a share of the spoils.

Watford stay rooted to the foot of the table, two points behind Norwich, who play Manchester United on Sunday, while a second consecutive goalless draw sees Bournemouth, who have now failed to score in their last three Premier League matches and are without a win in four, rise to eighth.

Watford should have been ahead as early as the second minute when Cherries 'keeper Ramsdale could only divert Deulofeu's cross into the path of Doucoure on the penalty spot, but the midfielder skied his shot way over the crossbar with the goal at his mercy.

Quique Sanchez Flores' side's plans were then dealt an early setback when midfielder Tom Cleverley was withdrawn in the 10th minute after picking up an ankle injury, with Hughes replacing him.

Man of the match: Aaron Ramsdale.

Despite Watford's early momentum, Bournemouth went closest to taking the lead. Cook rose highest to meet Fraser's corner, but the centre-back, who was given the freedom of the penalty area by Watford, could only rattle the crossbar with his header.

Bournemouth continued to grow into the game and Watford needed Foster to keep the scores level heading into the break. First, he kept out Rico's crisp half-volley before making a brilliant block to deny Groeneveld at the far post.

Flores' side started the second half in the same vein as they had begun the first, with Deulofeu forcing Ramsdale into a smart save inside the opening two minutes, after expertly weaving his way past Cook and into the penalty area.

Watford brought on Andre Gray on the hour mark in place of Nathaniel Chalobah, but the change did not have the desired effect as they were still unable to break the deadlock.

Watford made two changes from last weekend’s 1-1 draw at Tottenham. Masina and Deulofeu came in for the suspended Jose Holebas and the injured Danny Welbeck.

King, Lerma, and Groeneveld replaced Harry Wilson, Lewis Cook and Dominic Solanke from the side that drew 0-0 with Norwich last weekend.

With less than 10 minutes left, the Hornets came agonisingly close to scoring when Roberto Pereyra flicked on a corner which was deflected just ahead of the arriving Gray at the far post.

Bournemouth substitute Harry Wilson came close at the other end from a free-kick just outside the box, curling the ball over the wall and just wide of Foster's goal as the points were shared.

Watford head coach Quique Sanchez Flores: "I am confident and I am realistic too. I know we have to work really hard and I know we are working really hard. I know how the players are training every week. They deserve to win. We are creating something solid for the future. I believe that. I want to think in a positive way and that this was a good base for the future. 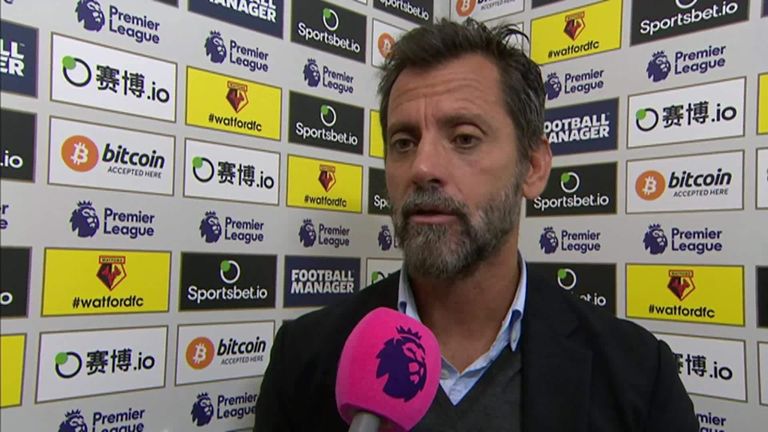 Watford manager Quique Sánchez Flores says his side are getting closer and closer each week to their first win of the season after their 0-0 draw against Bournemouth in the Premier League.

Bournemouth boss Eddie Howe: "I am frustrated on one hand, but on the other hand we could have also lost the game. Keeping a clean sheet away from home is positive, but having our third game without scoring is certainly a negative. We don't normally struggle to score but today at least we did not struggle to create chances." 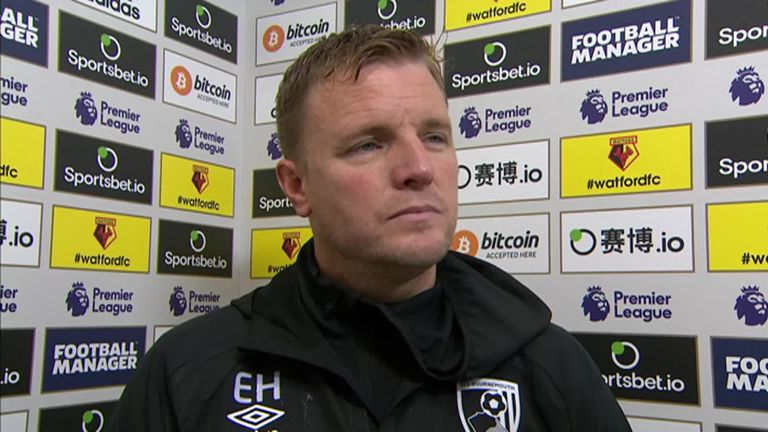 Bournemouth manager Eddie Howe says he doesn't know where his side's goal scoring ability has gone after the Cherries drew a blank for the third game in a row in their 0-0 draw against Watford in the Premier League.

Hit play on the video below to hear the views of Soccer Saturday pundit Paul Merson following the 0-0 draw at Vicarage Road... 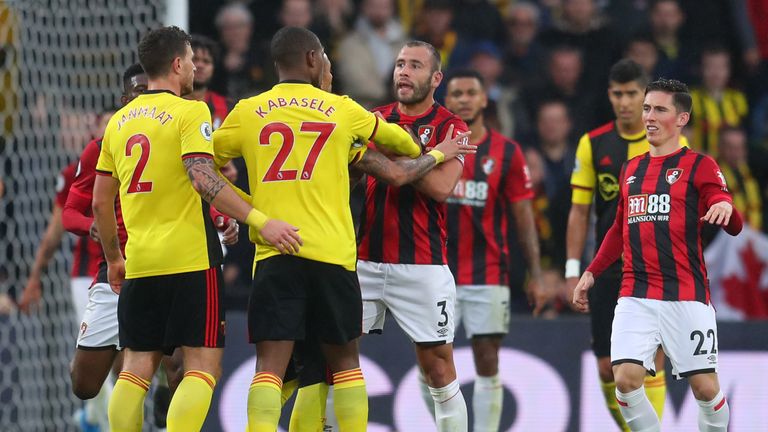 Paul Merson says Watford were disappointing in their game against Bournemouth but still believes they will stay up.

Man of the Match - Aaron Ramsdale

It was a toss-up between Ramsdale and Foster for man of the match with the goalkeepers ending the afternoon on top.

In the end it was the Bournemouth stopper, who got the nod after making several fine saves to keep Watford at bay.

The stops to keep out Deulofeu early in the second half and Hughes late on in the game were particularly impressive as Bournemouth sealed a second straight clean sheet.

Watford now travel to Everton in the Carabao Cup round of 16 at 7.45pm on Tuesday evening before hosting Chelsea, live on Sky Sports, next Saturday at 5.30pm in the Premier League.

Bournemouth are not in Carabao Cup action in midweek. They are back in action next Saturday when they welcome Manchester United in the Premier League at 12.30pm.