Watford compounded United's misery with a second four minutes later as, after Aaron Wan-Bissaka brought down Sarr inside the box, captain Troy Deeney blasted home a penalty for his first Premier League goal in nine months.

The result means that after 18 Premier League games, United have 25 points, the fewest they have ever accrued during a Premier League campaign. Ole Gunnar Solskjaer's side remain four points off fourth-placed Chelsea, who face Tottenham later on Renault Super Sunday.

Watford remain bottom of the table on 12 points, but are now just six points from 17th-placed Southampton following only a second win over Manchester United since 1986.

"It's a massive win," Deeney told Sky Sports. "We've been close for ages now. I know people look at us at the bottom of the league, but the performance we put in against Liverpool last week and Leicester before that, there's a lot of games we could've won. This is massive, but we won't get carried away."

Man of the match: Gerard Deulofeu.

How United suffered nightmare before Christmas

United's preparations were disrupted as their team coach arrived at Vicarage Road less than an hour before kick-off, and they lacked rhythm in a drab opening 45 minutes. Indeed, the visitors failed to have a shot on target in the first half of an away Premier League game for the first time this season.

Fit-again Paul Pogba was named among the Manchester United substitutes. Ole Gunnar Solskjaer reverted to the side that had drawn 1-1 at home to Everton last week.

Nigel Pearson named an unchanged XI for his first home game in charge of bottom side Watford as he looked to build on a strong display in a defeat to league-leaders Liverpool last weekend.

In Nigel Pearson's first home game in charge, Watford were the more purposeful team before the interval but there was a familiar lack of cutting edge on show with Abdoulaye Doucoure's flashed header from Kiko Femenia's cross the closest they came to breaking the deadlock.

As it was, Pearson's side ought to have trailed at half-time as, after Dan James failed to find the run of Jesse Lingard, Anthony Martial did so at the second attempt, but when clean through on goal, Lingard could only lift his shot over the onrushing Ben Foster and onto the top of the net.

But an uneventful first half would give way to a frenzied first 15 minutes of the second as De Gea suffered a lapse in concentration. Will Hughes' free-kick was helped on by Christian Kabasele, and as Harry Maguire went to close down Sarr, the Senegalese winger's shot bounced into the ground and through the gloves of De Gea.

"He's taken his eye off the ball, and that's an easy save," Graeme Souness told Sky Sports. "It's spinning towards him, and you have to say that's why he's not got it, but it's still poor goalkeeping. He should be reading that. It's a genuine howler."

Such a high-profile error for a senior figure visibly unnerved the United defence, as three minutes and 10 seconds later, referee Lee Mason was pointing to the spot after Wan-Bissaka upended Sarr inside the box after a clever flick-on from Deeney.

The Hornets captain stepped up to blast home his fourth goal in five Premier League home games against United, with all four coming via the penalty spot.

It was only after Watford's second that Solskjaer's side showed any urgency as Paul Pogba was summoned from the bench for his first appearance in nearly three months. The Frenchman combined with his compatriot Martial to force Foster into his first meaningful save with 14 minutes remaining.

Foster was again called into action six minutes later as Pogba telegraphed his shot when slipped through down the left, before any hopes of a late United rally were ended when Maguire could only direct his header from close range straight at the Watford goalkeeper.

Watford boss Nigel Pearson: "We probably played better last week, and there's more to come from us for sure. But we showed commitment and mental strength to try to win the game.

"The most important thing today was to try to record our first home win and we've managed to do that against one of the stellar sides in the Premier League. It's good, but it's only a start. 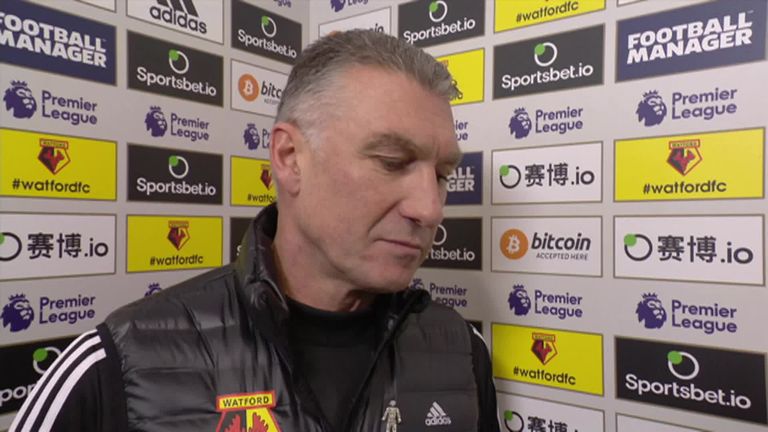 "We've got ground to make up on the other teams, but if we show that willingness to work hard as a team, I think we've got a realistic chance of getting out of the difficulties that we're in."

Manchester United manager Ole Gunnar Solskjaer: "It was a mistake [De Gea's error], it happens in football and it is what we train for every day to make sure they don't happen again. David has been very good lately. It is just one of those things that happen. 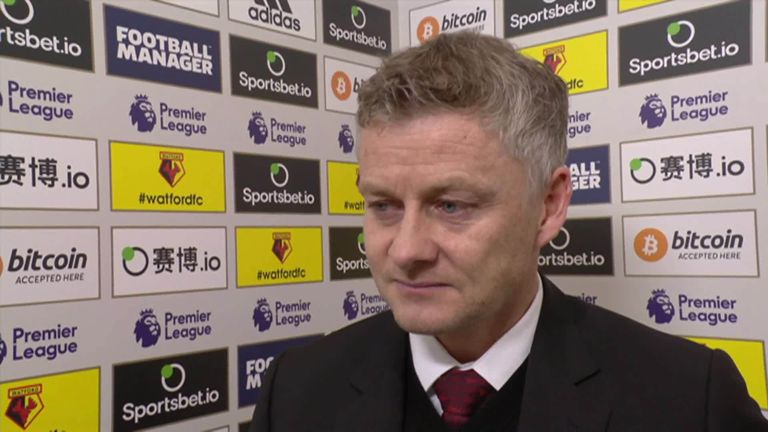 "We started the game slow. The first half was very, very poor from both sides, it was too slow, like a testimonial. You have to earn every point on the pitch and today we didn't deserve that.

"It (the result) is very frustrating but we can do nothing about it now, we have to react. We have to pick ourselves up, don't feel sorry for ourselves and we need a reaction." 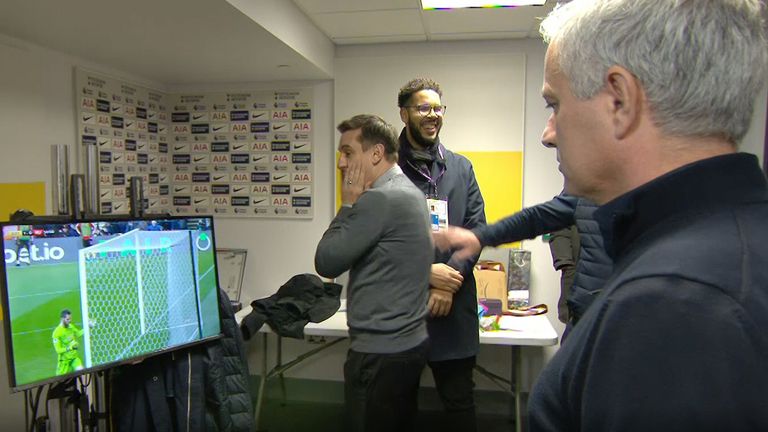 Deulofeu produced one of his best games in a Watford shirt as the winger tormented Aaron Wan-Bissaka.

The United full-back recently showed his qualities to keep Raheem Sterling quiet during the Manchester derby, but he will be having nightmares of Deulofeu running at him on Sunday night.

The Spaniard produced 29 passes into the opposition half, more than any other player and his 65 touches were more than any of his team-mates. Wan-Bissaka appeared preoccupied with the wideman when Sarr nipped in on his blindside to win the crucial penalty.

Watford travel to face Sheffield United away on Boxing Day; kick-off at 3pm. Manchester United are in action on the same day at 5.30pm as they host Newcastle at Old Trafford.