Report and highlights from the Sky Bet Championship clash between Watford and Preston at Vicarage Road as goals from Domingos Quina, Troy Deeney, Nathaniel Chalobah and Joao Pedro seal a comfortable Hornets win 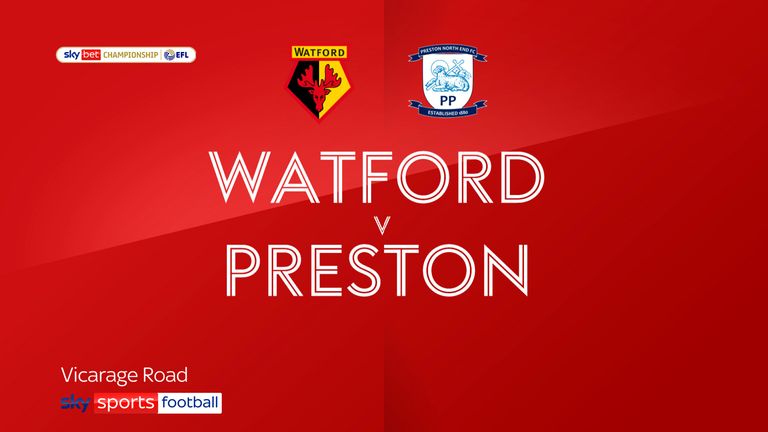 Watford captain Troy Deeney marked his first start of the season with an inspired display in a 4-1 victory over Preston.

The 32-year old scored one and created another to give the Hertfordshire side a comfortable afternoon at Vicarage Road.

The first chance of the game fell to the visitors after just three minutes, when Sean Maguire picked up a ball from Daniel Johnson to unleash a fierce shot which forced Watford goalkeeper Ben Foster to fingertip over the crossbar.

Indeed, the visitors had by far the better of the opening exchanges, and on seven minutes Brad Potts just curled the ball wide of the left-hand post.

However, Watford started to press and on eight minutes a long-range effort by Kiko Femenia forced goalkeeper Declan Rudd to turn his effort away.

The hosts took the lead moments later when Domingos Quina connected with a cross by Ismaila Sarr to volley home past Rudd.

Preston almost equalised on 24 minutes through Patrick Bauer from 10 yards out, but Foster was on hand to block his effort.

Watford were forced into a change on the half-hour mark when Andre Gray, making his 100th appearance for his club, was replaced through injury by Joao Pedro.

Sarr almost doubled the lead for the hosts just before the half-time whistle when his volley from a tight angle was turned over the bar by Rudd.

However, the advantage was increased eight minutes after the restart from the penalty spot.

Sarr was upended in the area after a challenge by Jordan Storey and Deeney stepped up to mark his return to the starting line-up with his first goal of the campaign.

The afternoon looked set to get uncomfortable for Watford two minutes after doubling their lead, when a long-range effort by Tom Barkhuizen took a deflection to wrong-foot Foster.

But the two-goal advantage was restored on 59 minutes when a one-two with Deeney saw Nathaniel Chalobah guide the ball past Rudd.

The Preston goalkeeper remained the busier of the two shot-stoppers, saving from Deeney then tipping a Sarr effort over the bar.

The Hornets skipper remained highly involved, although he was guilty of heading over the bar from less than 10 yards out after finding space in the area.

Watford netted their fourth goal on 74 minutes through an unmarked Pedro at the back post and remain unbeaten on home soil this season.

Watford's Vladimir Ivic: "It was one of the best performances of the season, today I believe we had a good game. This was not our best performance. This is our target, to play better and be able to play every game like this, to improve some details during the game.

"When we have games every three to four days, we need to take care of a lot of things, not just the games. When you have a lot of injured players you need to be smart in how to use them. I could speak about Troy Deeney and his quality, and how he's important for the team, I don't think it's a doubt. He did his job today, it's the first game he's started and I expect he'll be available in the next games to help us."

Preston's Alex Neil: "It was always going to be a difficult game for us, if you look at Watford's squad coming down from the Premier League, they're full of quality players. If you look at what we've got missing at the moment, we don't have a fit full back four or even cover for one.

"To be honest I thought it was a good competitive match for sixty minutes and then we just don't defend some basic stuff in the box well enough. When you give Watford goals quite cheaply, you find it doubly difficult to get into the game. As soon as the fourth goal goes in, the game is over at that point."