Report and highlights from the Sky Bet Championship clash between West Brom and Bristol City at The Hawthorns as goals from Jordan Hugill, Kyle Bartley and Karlan Grant sealed a comfortable Baggies win 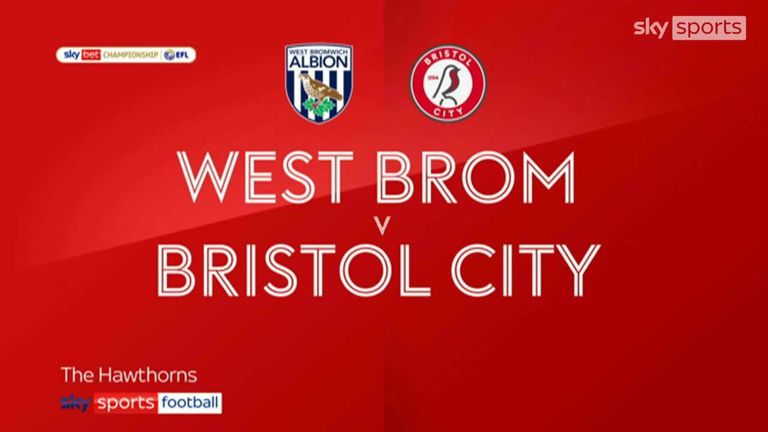 West Brom swept aside Bristol City with a comfortable 3-0 victory to return to the Sky Bet Championship automatic promotion places in a much-delayed game at The Hawthorns.

Jordan Hugill, Kyle Bartley and Karlan Grant punished woeful defending from Bristol City but four delays - two for medical emergencies after a supporter from each club was carried away in unrelated incidents and two for injuries to players on the pitch - cast a cloud over proceedings and caused a 25-minute delay.

Kick-off was put back for 15 minutes after a West Brom supporter in the Halford Lane Stand was carried from the crowd on a stretcher.

The fan was conscious and able to put his thumb up to acknowledge the applause he received before being assessed.

A third defeat on the bounce made it a miserable return to West Brom for manager and former Albion assistant boss Nigel Pearson just 24 hours after the exit of coach Paul Simpson.

The departure of assistant head coach Keith Downing - another ex-West Brom assistant - was also expected to be confirmed as he was absent from the dugout.

City briefly thought they had equalised right after the restart when Nahki Wells swept the ball home but the striker was several yards offside.

But it was all Albion and they had several chances to extend their lead before making it 2-0 three minutes before half-time.

Hugill sliced over from close range from Conor Townsend's cross and there was a further delay to allow him treatment after he collided with the post before Nathan Baker headed narrowly wide of his own goal from Furlong's long throw-in.

Hugill hooked over the bar after Robert Snodgrass' pass had been headed on by Rob Atkinson before an intelligent chip from Snodgrass hit the inside of the post and bounced to safety.

There was a further lengthy stoppage, this time for Baker to be treated but he eventually had to leave the field on a stretcher with what appeared to be a head injury.

Hugill could have been celebrating a hat-trick after he latched onto a woeful back pass from George Tanner, leaving him with a one-on-one, only for goalkeeper Daniel Bentley to deflect the ball wide.

West Brom deservedly doubled their lead with a simple set-piece.

Furlong hurled in another long throw-in and captain Bartley rose highest in a crowd of players to glance into the far corner.

After 10 minutes of time added on, at half-time there was another medical concern as the emergency services treated a Bristol City fan, who was given oxygen as he was taken away in a wheelchair.

When the action resumed, Bartley's header forced Bentley into a diving save on the line.

But it was 3-0 in the 52nd minute after more poor City defending.

A hopeless back pass from substitute Danny Simpson just into his own half after a Bristol corner left Grant the chance to run on and slot past Bentley.

West Brom's Valerien Ismael: "I have been told the two supporters and the Bristol City player are well so that's the important thing. From my side we send our best wishes from the staff and the club to everyone concerned.

"It was difficult because before we came out of the changing room the adrenalin is running high and I was the same with my last speech to the players. So we raise the intensity high, then we had to wait 15 minutes and the intensity goes down. But we tried straight away to keep the intensity and at half-time we found a great reaction to a strange situation."

Bristol City's Nigel Pearson: "The delays had nothing to do with it. People's health is a lot more important than starting a football match. Whether it's 10 or 15 minutes is irrelevant - it didn't stop them (West Brom) from starting quickly. We knew what to expect but we didn't deal with it - that's the biggest disappointment.

"The goals we conceded in the first half we were too soft and too passive and we didn't sort our feet out. It was a really bad day for us. Our defending collectively wasn't good enough. Having said that it would be ungenerous of me not to compliment West Brom on how they played with intensity and they have a really good squad of players."