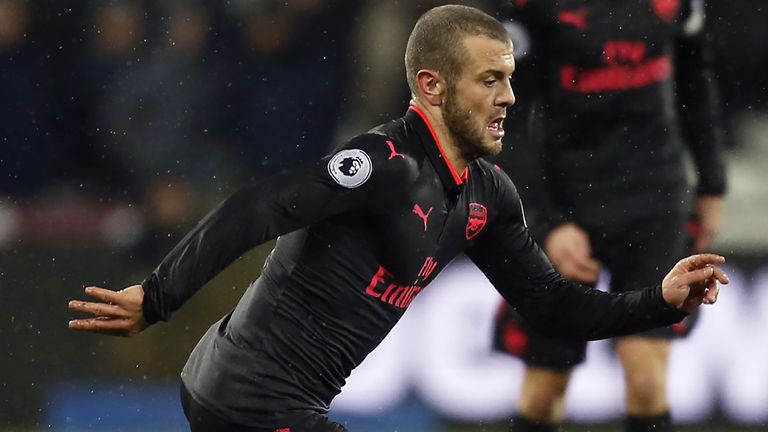 Olivier Giroud and Jack Wilshere could not inspire Arsenal to victory in their first Premier League starts of the season as West Ham held them to a goalless draw at the London Stadium.

It very nearly turned into defeat for Arsenal, but substitute Javier Hernandez saw his effort hit the bar before bouncing on the goal-line in the final minute of normal time.

West Ham ultimately reduced Arsenal to just three shots on target all match, despite the visitors enjoying 70% of possession.

The draw leaves Arsenal in seventh - one point behind Tottenham, Liverpool and Burnley - while West Ham remain 19th, but move level with West Brom and Crystal Palace on 14 points.

A tight first half saw West Ham carve out the first opportunity, but Marko Arnautovic was correctly flagged for offside after heading in from Arthur Masuaku's cross.

Alexis Sanchez then saw his deflected effort sail narrowly over before Alex Iwobi's strike from a narrow angle cannoned off the near post and away to safety.

West Ham had a penalty appeal turned down after a coming together between Granit Xhaka and Manuel Lanzini, while Giroud's overhead-kick attempt was blocked by Aaron Cresswell's hands - though the West Ham defender opted to feign injury as though the effort had hit him in the face.

West Ham named an unchanged XI from the side that beat Chelsea 1-0 on Saturday, while Arsenal brought in Jack Wilshere, Olivier Giroud, Alex Iwobi and Ashley Maitland-Niles, who was making his first start for the Gunners.

After the break, Arnautovic snatched at an effort following Mark Noble's delightful pass, with the West Ham captain using the pace of the ball to chest a pass over Nacho Monreal.

Arsenal then spurned two great opportunities, but Mesut Ozil could only stab an attempt wide before Wilshere fired over from 10 yards out.

And while Arsene Wenger turned to Alexandre Lacazette in the hope of finding a late winner, David Moyes brought on Hernandez with 10 minutes to go, and it was the Mexican who came within a whisker of scoring a winner after some calamitous Arsenal defending.

When you hit the underside of the bar in the last minute... pic.twitter.com/NQEf84ptrs

Man of the match - Angelo Ogbonna

Moyes will be delighted with his side's defensive display at the London Stadium, and it was Ogbonna who put in a rock-solid performance to keep Arsenal at bay.

Time and again, Ogbonna was there prevent this visitors from scoring, making three blocks and 11 clearances - the highest of any player in both categories.

David Moyes: "We could have [nicked it]. It was a really good performance by the players and certainly a disciplined and organised performance again which we have needed in the three games.

"Sometimes if you do that, you hang in and you stick with it then you get yourself some opportunities and I thought we'd done that at the end.

"I would say for the majority of the game we would have to praise the boys for how disciplined they were as defenders and how well they stuck to their task against a good team that caused us problems."

Arsene Wenger: "There are some draws that are frustrating. It is one of them. It was 10 against 10 in the final third.

"West Ham defended great tonight. They were disciplined, they were organised. If there's anyone you want the ball to fall to it's Hernandez, and he hits the bar. He should score and then the game's over.

Iain Dowie says Arsenal did not do enough to win against West Ham but was very impressed with Jack Wilshere, who started for Arsenal for the first time in the league this season.

"Adrian, I can't remember a save he had to make. There wasn't enough dynamism. Ozil and Sanchez were good in their combination play, but they didn't show enough desire or enough drive, Arsenal. Their passing wasn't good. The one plus, and it was a huge plus, was Jack Wilshere who was very, very good. For me he does more in the team than Ramsey does."

West Ham travel to Stoke on Saturday for a 3pm kick-off in the Premier League, while Arsenal are in action at the same time at home to Newcastle.

Arsenal and West Ham will meet once more on December 19, in a Carabao Cup quarter-final clash at the Emirates.