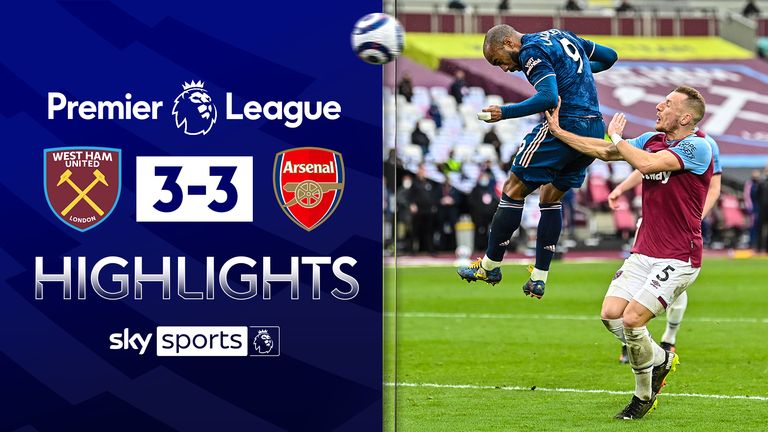 FREE TO WATCH: Highlights from the 3-3 draw between West Ham and Arsenal in the Premier League

Alexandre Lacazette's 82nd-minute header completed a remarkable Arsenal comeback as West Ham surrendered a three-goal lead to draw 3-3 in a breathless encounter at the London Stadium.

The Hammers raced into what seemed an unassailable advantage after Jesse Lingard's opener (15) was added to by Jarrod Bowen (17) and Tomas Soucek (32).

But Lacazette played his part in beginning the sensational response by the Gunners when his shot deflected in off Soucek (38), before another own goal from Craig Dawson further reduced the deficit (61). West Ham were crestfallen when Lacazette met Nicolas Pepe's cross to secure a share of the spoils.

This will feel like a defeat for David Moyes' side having been in such a commanding position, but his team remain in fifth place on 49 points, two adrift of Chelsea in the final Champions League place. The result moves Arsenal into ninth ahead of Aston Villa's game with Tottenham later on Super Sunday.

Man of the match: Calum Chambers.

How Arsenal fought back in thriller

West Ham had won just three of their previous 24 Premier League home games against Arsenal, but they started the day five places above their opponents in the table and dominated the opening half an hour.

Mikel Arteta had spoken of wanting his Arsenal side to return to the standards he has set for them after underperforming in Thursday's 1-0 Europa League defeat to Olympiakos, but they deservedly went behind after 15 minutes when Lingard rifled in Michail Antonio's cutback.

Ninety-eight seconds later, Arsenal fell further behind in comical circumstances. Bukayo Saka fouled Antonio on the edge of the penalty area, but, as the Gunners turned their backs in preparation for the set-piece, the razor-sharp Lingard played a quick free-kick into the path of Bowen, who beat Bernd Leno at his near post.

Arteta felt obliged to change something as Saka and the ineffectual Pierre-Emerick Aubameyang switched flanks, but he witnessed his team concede for a third time as Soucek (32) pounced to direct Antonio's header from Vladimir Coufal's cross into the bottom corner, with replays showing the Czech was marginally onside.

It was the earliest from the start of a Premier League match that West Ham had scored three goals since May 2007 against Bolton.

But Arsenal were handed a lifeline just five minutes later as Calum Chambers was played down the right and his cross was controlled and fired emphatically past Lukasz Fabianski by Lacazette, via a significant deflection off Soucek.

Moyes' side had scored with all three of their shots on target during the opening period but there were signs of the momentum shifting in Arsenal's favour before the restart.

Within two minutes of the second half, the Gunners came within a whisker of a second as Lacazette took in Chambers' cultured pass to lift his shot over Fabianski but Issa Diop managed to hook the ball off the line.

The Frenchman was growing in influence as he then turned provider moments later for Saka, who was released through on goal but Fabianski smothered his low shot.

By the hour-mark, the deficit was reduced to one as Arsenal forced a second own goal. This one was far more clear-cut, as West Ham were this time picked off by a quick free-kick. Lacazette worked it inside to Martin Odegaard, who played in Chambers on the overlap and his low cross was crashed beyond Fabianski by the sliding Dawson for his second own goal in as many games.

West Ham came within inches of restoring their two-goal lead as Lingard's pass was flicked on by Antonio into the path of Bowen, who only had Leno to beat but Kieran Tierney recovered to produce a crucial block.

The best form of defence was to attack for the hosts, and they missed a glaring chance to put the game to bed when Antonio struck the post with the goal at his mercy following brilliant work by Said Benrahma. His cross-shot fell to the stretching forward but he could only divert the ball onto the woodwork from close range.

By now, Arteta had hauled off Aubameyang despite needing a goal as Emile Smith Rowe and Pepe were summoned, and it was the latter who unlocked West Ham for a third time to complete the spirited fightback.

Odegaard was involved once more as he found Pepe down the right, and, on his weaker foot, his cross was headed home at the far post by Lacazette.

3 - This was the third Premier League game this season in which a team has led by 3+ goals and failed to win (also West Brom 3-3 Chelsea and Tottenham 3-3 West Ham); the only other Premier League campaign to see three such instances is 2010-11. Comebacks. pic.twitter.com/EL0YNha8Fy

"They are all over the place, West Ham. If you offered them a point they would take it," said a breathless Carragher.

It was next goal wins, and it very nearly swung back West Ham's way when Declan Rice went on a barnstorming run and stung the gloves of Leno, who had been a spectator at times during the second period. Back came Arsenal for one last assault but Pepe's tame effort failed to hit the spot as this pulsating contest came to an end. 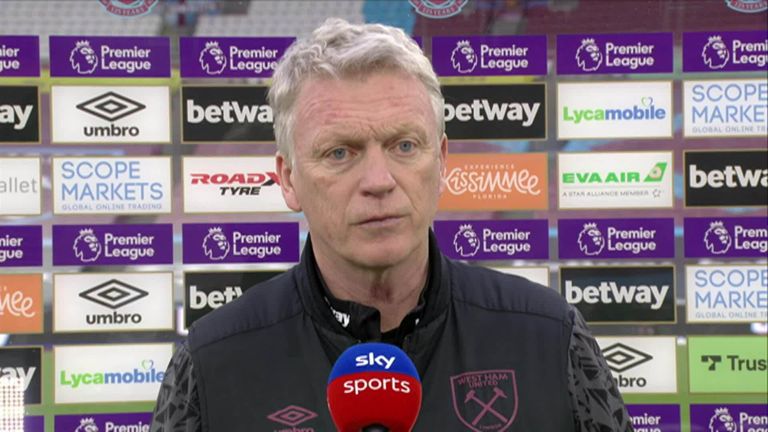 David Moyes was disappointed that West Ham surrendered a three goal lead to Arsenal but said that the draw still shows that the Hammers can compete with the best teams in the league.

West Ham boss David Moyes: "It was a really good game, tough, lots of goals. We played very well especially in the opening 30 minutes and unfortunately we gave them a goal before half time, which gave Arsenal a foot up.

"There was a lot of frustration throughout the game about the decisions, but that's the way football goes sometimes.

"We played very well for long periods, Arsenal played well but are in good form, it wasn't a great result after going 3-0 up but we showed we are up there competing with the best teams.

"It has been a long time since we finished above Arsenal, we have done our best to make sure they can't catch us. Now we want more, I'm greedy and they are devastated in the dressing room at not taking three points." 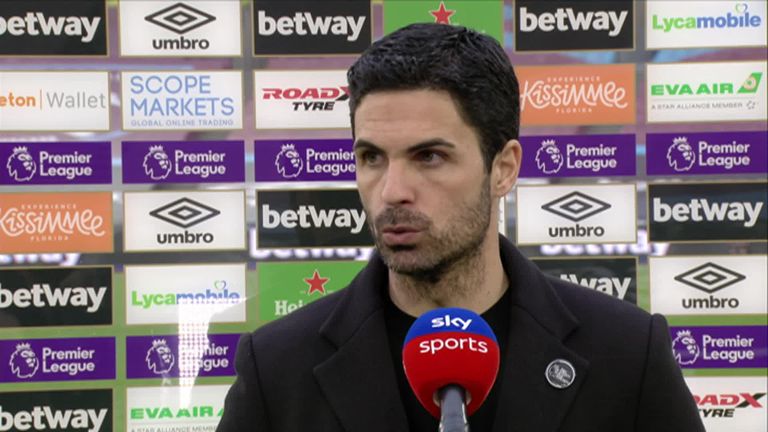 Mikel Arteta was furious with Arsenal's first half performance against West Ham which saw them concede three goals which Arteta labelled as unacceptable.

Arsenal boss Mikel Arteta: "I'm very disappointed because I cannot accept my team to play the way we did in periods in the first half. I expect we play at the level we did afterwards.

"The first goal, it can happen. It is a really good combination [by West Ham]. That is fine. The way we concede the second and third is unacceptable. Afterwards the attitude and togetherness we showed - it is really difficult to do what we have done. We got really close to winning and I think we deserved to win it but the first part really worried me."

On switching off at a set-piece: "Unacceptable. We talk about that all the time. I don't know if it's a hangover from Europe, tired, focus, it was more than one player that switched off. We have to right that quick."

Man of the match - Calum Chambers

Created 3 chances - most in any @premierleague game for Arsenal pic.twitter.com/QC78TfChkD

"I'm going for Calum Chambers. If you look at the Arsenal team, and why he is in the team, you would have thought it would have been to cope with West Ham at set-pieces.

"You don't think he's going to offer too much to the Arsenal attack, but without him they wouldn't have been able to get back into this game."

On Chambers' performance, Arteta said: "He was really good, he has been training really well. He gives us something else, some height in the back line and he was busy in the final third as well. A really good performance."

"My feeling is mixed between being proud of the team for the comeback. We didn't respect the game plan from the coach [in the first half].

"We had the pressure, we knew it was a big game. We have to work a lot to be ready for the end of the season.

"It is really complicated, this kind of game, we need to work a lot. We knew even after the bad first half we could come back and score more." 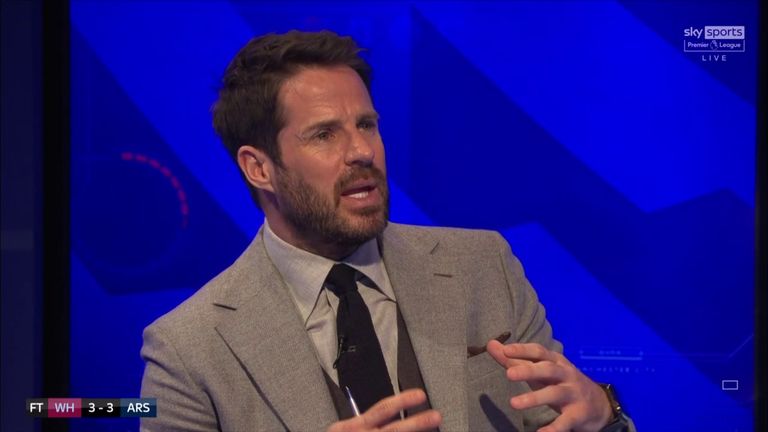 "That was Arsenal's season summed up in 90 minutes.

"It's so inconsistent. One minute they are poor and the next minute they are great, and that's not good enough. If you want to be a successful football team, you've got to be consistent but at the moment it is like a rollercoaster.

"Mikel Arteta has got to sort that out if they are going to be successful next season."

Following the international break, Arsenal host Liverpool in the Premier League on April 4, live on Super Sunday; coverage starts at 4pm with kick-off at 4.30pm. West Ham travel to face Wolves the following day on Monday Night Football; kick-off is at 8.15pm.