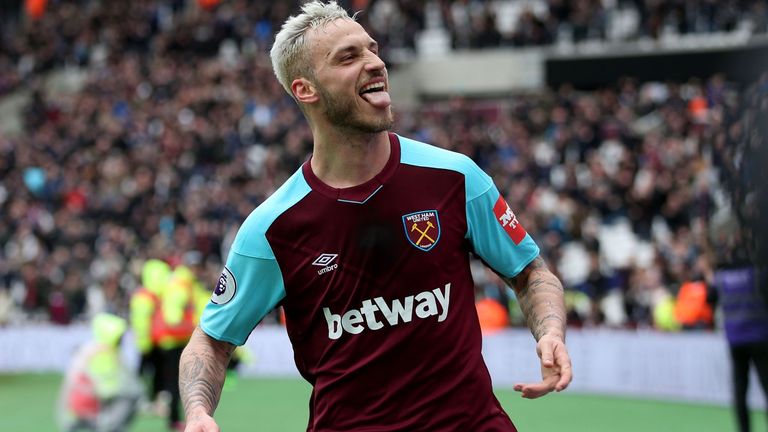 In their first game since fans charged onto the pitch during their 3-0 defeat to Burnley, the Hammers surged to a comfortable lead at half-time with a double from Arnautovic (17, 45+4) and a powerful strike from Joao Mario (13).

Tap on the video section of the app if you are having problems viewing match highlights.

Hughes, who was taking charge of his first Premier League game for Southampton, has history with Arnautovic after he publicly criticised him following West Ham's game with Stoke earlier this season. The West Ham striker celebrated his opener by angrily shouting towards the away dugout, presumably with Hughes his target.

The result sends West Ham five points clear of the drop zone while Southampton remain in the bottom three, two points from safety with Arsenal (a) and Chelsea (h) their next two games.

West Ham skipper Mark Noble called for the home fans to stick with their team for this crucial encounter, which subsequently turned out to be an easy request as the Hammers started full of energy.

Man of the match: Marko Arnautovic

They were 2-0 up inside 17 minutes as Southampton froze under the pressure.

On 13 minutes, a quick counter-attack down the right flank - triggered by Cheickhou Kouyate - resulted in Mario firing home a spectacular strike from 18 yards out.

The home fans sensed nervousness in the visitors and roared their team on. Arnautovic fired a gilt-edged chance wide on 15 minutes but made amends 90 seconds later when hammering home a rebound after his initial header from close range was palmed back to him.

Declan Rice and the previously suspended Arthur Masuaku came back into the fold for West Ham, who had Manuel Lanzini missing through injury. Mark Hughes made two changes and there was a return for Charlie Austin following three months out injured.

Southampton's front pair of Charlie Austin and Manolo Gabbiadini were mere bystanders as the Hammers controlled the game in every department. The third goal came during first-half injury-time when Arnautovic volleyed home a pin-point Arthur Masuaku cross.

The introduction of Shane Long improved Hughes' men after the break but they never looked capable of giving Joe Hart anything serious to think about.

Arnautovic hunted his first Premier League hat-trick but couldn't add to his tally despite testing McCarthy with some long-range efforts - his eighth and ninth goals in his last 13 games were more than enough for the comfortable Hammers.

Man of the match: Marko Arnautovic

Having been sent off in two of his last three appearances against Southampton, Arnautovic had unfinished business with them and, of course, their manager Hughes, who sold him to West Ham. The decision to switch him to a central striker now looks a masterstroke from Moyes and after failing to score in his first 13 appearances for West Ham, he's now got nine goals to his name this season.

Joe Hart made just his second Premier League appearance since November 29 and kept a clean sheet in front of the watching Gareth Southgate. Ryan Bertrand also faces a battle make the final World Cup squad after Ashley Young’s solid performances in the friendlies and he struggled to make an impact for Southampton. West Ham’s opening two goals came from an attack that developed down his flank.

David Moyes: "We made a great start and we had great support from the first minute and I think it inspired the players as well.

"The players had a really good go right at the start and thankfully we got a couple of early goals and the third goal just before half-time made a big difference as well."

Mark Hughes: "We were poor. The opening period of a game is vitally important.

"You have to understand as the away team that the home team is going to come flying out of the blocks and you have to be ready to go yourself.

West Ham were all over Southampton like a rash from the first whistle, but Southampton created their own mess.

Arnautovic has got pace and power, he likes to stretch the defenders with a little angle on the shoulder of them and it means that they don't like defending too high up. He gets his team up the pitch by 10-15 yards.

This was everything about a positive return from David Moyes and his team but there is plenty to talk about for Southampton. Austin was living off scraps, for a game of this magnitude it incredible how they froze. It wasn't fear they just didn't play like a team. If they continue like this they are going down.

West Ham have a London derby with Chelsea at Stamford Bridge next Sunday, live on Super Sunday, while Southampton take on Arsenal in Sunday's early game - also live on Sky Sports.

Pick your dream team for Chelsea v Tottenham to be the latest £50k jackpot winner.