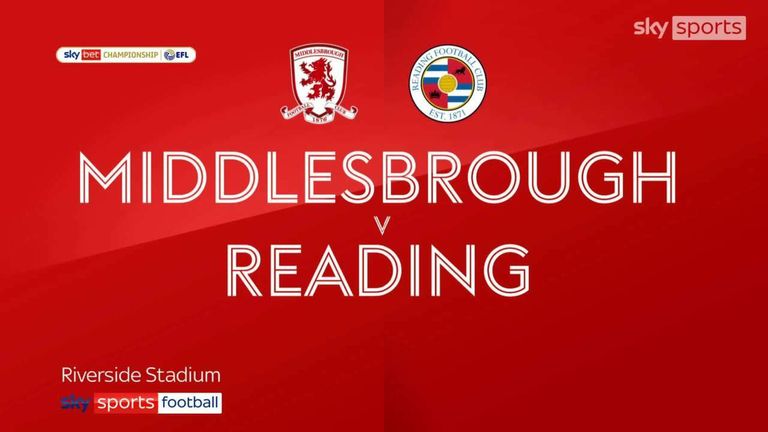 Highlights of the Sky Bet Championship match between Middlesbrough and Reading.

A stoppage-time winner from Matt Crooks saw Middlesbrough come from behind to beat Reading 2-1 at the Riverside Stadium.

Andy Carroll opened the scoring for the visitors after 67 minutes with a header before Crooks equalised in the 85th minute and headed home the winner late in the game.

The result sees Boro move into the Sky Bet Championship play-off places, while Reading still linger above the relegation zone.

The hosts came close in the 13th minute when Neil Taylor put a dangerous ball in from the left and found Crooks, who was unable to nod the ball far enough down and Reading cleared.

The Royals had a chance in the 22nd minute after a move down the right saw Junior Hoilett in plenty of space but the midfielder hit well wide of the target.

Jonny Howson came close to finding the opener after 25 minutes when his shot from outside the box took a big deflection to catch out goalkeeper Luke Southwood, but the shot flashed inches past the bottom-left corner.

They had another chance just four minutes later when Andraz Sporar's effort was saved by Southwood before the ball deflected back off the defence and clipped a post, with the rebound quickly cleared.

Both sides had chances as the first half drew to a close as Hoilett forced Joe Lumley into a save at his near post before Boro won the ball back and broke down the left, but Aaron Connolly's shot from the edge of the box flew just over the crossbar.

Middlesbrough pressed again when Isaiah Jones burst down the right flank and found Connolly in the six-yard box but his shot went wide, and the Brighton loanee tested Southwood again just before the break.

Reading's Tom Dele-Bashiru had an early second-half chance after weaving through the home defence, forcing Lumley to make a low save to his right.

The visitors had more sights at goal when Danny Drinkwater's shot was cleared, and Boro's rearguard were called into action again to clear a low cross into the box.

Reading made the breakthrough in the 67th minute when Dele-Bashiru came down the left and crossed for Carroll to loop a header over Lumley and into the bottom corner.

Crooks came close to responding shortly afterwards but his long-range effort flew wide of the mark.

Middlesbrough's persistence paid off in the 85th minute when Crooks levelled, heading into the top corner with Southwood unable to make the save.

And Crooks snatched a winner deep into stoppage time after Jones whipped the ball into the box and found the captain, who rose above the defence to head home and earn three points for his side.

Middlesbrough's Chris Wilder: "Everybody loves a last-minute winner don't they?. The Riverside was bouncing, especially when we got ourselves back onto level terms, there was no sitting back from that point and it was all in. Stick the lot, red and black, stick it on and we did. We found a bit of quality, although we weren't a lucky team today. I thought our quality at times wasn't as good as it has been, 62 per cent possession, against a team that's got quality as well.

"We took gambles, which we had to, to get back into the game. We found a couple of great bits of quality that we haven't found for the majority of the game in terms of Tav's [Marcus Tavernier] cross and Issy's cross [Isaiah Jones]. We had enough first half to go in at half-time up in the game, we just couldn't find that first goal or that bit of quality. The start of the second half from our point of view wasn't great, but in the end through perseverance, through belief, we kept doing the things we did."

Reading's Veljko Paunovic: "Football today is cruel to us, a severe punishment in the end. I think our team after Fulham's game a couple of days ago, reestablished spirit and identity very well. That's what we showed today in the 85 minutes. At the end we conceded two goals, late goals, and showed the only aspect of the game that we still can't control very well.

"It's unlucky. It was really cruel today but I'm proud of the effort and I believe in these guys. On Wednesday we're going to come back, fight back and fight stronger."