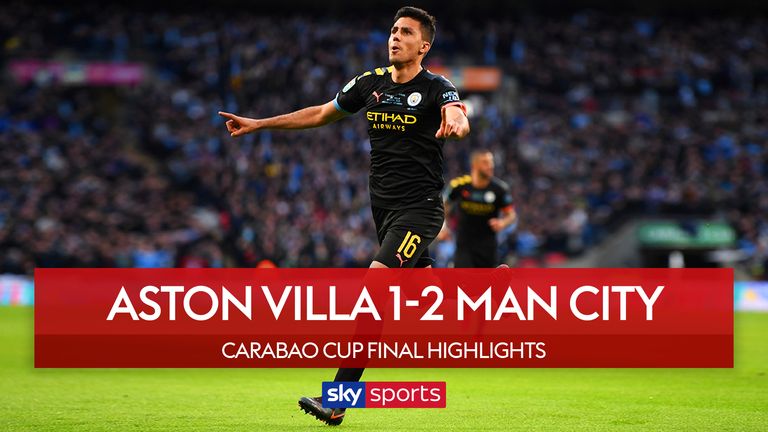 Manchester City won the Carabao Cup for a third successive season and took the first step towards realising their ongoing treble ambitions with a nervy 2-1 win over Aston Villa at Wembley.

A close-range finish from Sergio Aguero set Pep Guardiola's side on their way (19), before Rodri dampened hopes of an upset when he headed home Ilkay Gundogan's corner with half-an-hour on the clock.

While it initially looked as though Villa would be on the end of a hiding from there, they found a way back when Mbwana Samatta became the fifth African player to score in League Cup final following John Stones' glaring error (41).

After a brave showing in the second half, it looked as though they might force a penalty shootout at the national stadium when Bjorn Engels' header was tipped onto the framework of the goal by Claudio Bravo, but City held on for a fifth title in the last seven campaigns.

How City extended their reign as Carabao Cup champions

Backed by a typically raucous away following, Villa got the game up and running in a spritely fashion. Sensing opportunity from the first whistle, Anwar El Ghazi connected with a dangerous corner early on but the Netherlands international could not squeeze a header under Claudio Bravo's crossbar.

Having weathered the storm, City settled into a rhythm and penned their suddenly nervous opponents in their own half, taking 19 minutes to assert their dominance when Aguero converted a knockdown from Phil Foden, in the 19-year-old's first start since the 4-0 FA Cup drubbing of Fulham on January 26.

Hopes of upsetting the odds stacked in the reigning Premier League champions' favour appeared to have evaporated when Rodri powered a header beyond Villa goalkeeper Orjan Nyland after a contentiously-awarded corner. But Villa were not down and out.

But John Stones then gifted them a way back into the game. The centre-back failed to deal with a looping, yet straightforward, ball down City's right, allowing El Ghazi to drive on and deliver a teasing cross that Samatta stooped steer into the back of the net.

Dean Smith made three alterations to the side that lost 2-0 to Southampton last time out. Pepe Reina, Ezri Konsa and Kortney Hause made way for Orjan Nyland, Ahmed Elmohamady and Bjorn Engels.

Pep Guardiola, meanwhile, made sweeping changes to his side, following the midweek Champions League victory over Real Madrid.

Claudio Bravo started ahead of Ederson in goal, with Kyle Walker, Ilkay Gundogan and Rodri the sole survivors from the game at the Bernabeu.

There was no fast start from the holders after the break and any flow to the game ebbed away as the hour mark dawned, prompting Guardiola to introduce Kevin De Bruyne, who had inspired the 2-1 win over Real Madrid at the Bernabeu earlier in the week.

He galvanised City, but try as they might, for all their tinkering around the penalty area and the 16 places between them in the Premier League, they just could not breach the brave backline of their opponents, marshalled so ably by Tyrone Mings and Engels.

In the dying embers, Engels came within inches of sending the tie to a shootout, but Bravo's last-ditch intervention prevented such an eventuality and send the trophy back to the Etihad Stadium.

It's quite astounding that Foden is still only 19-years-old, given the number of years Guardiola's insistence on keeping him as a squad player has been questioned. A performance of this calibre only adds weight to that argument.

He had not started a game for City in more than a month prior to the final, but looked assured on the ball, composed on the attack and registered a tidy assist with the cutback for Aguero's opener. Villa left-back Matt Targett must have been sick at the sight of him.

"Every minute I get, I try to do my best," he told Sky Sports' Laura Woods after the final whistle. "You look at players like Kevin De Bruyne, David Silva - it's not going to be easy to get in the team. When I do, I just have to make the most of it. I'm just happy to play in this team."

Aston Villa's Dean Smith: "We had a little chat right at the end there and I'm very proud of them but that's the sort of performance we need to put in week in, week out. We went toe-to-toe with a top team today and if we do that every week and put in that performance then we'll be OK. 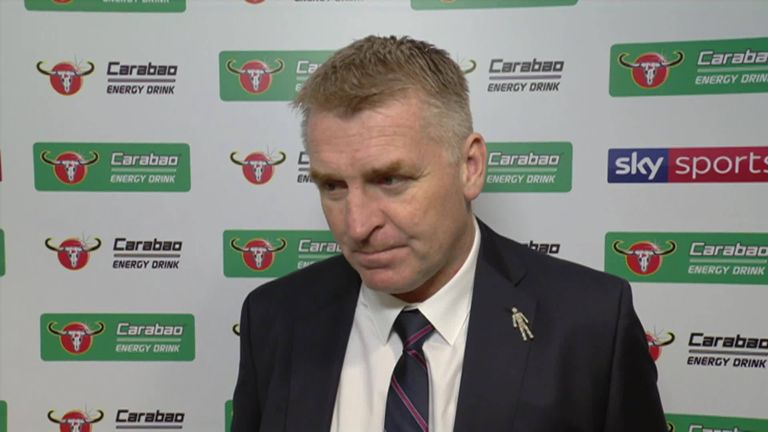 Dean Smith said he is proud of his players' performance and believes they were unfortunate to lose in the Carabao Cup Final.

"The focus will shift straight away now onto Premier League survival. We all saw results yesterday which has put us into the bottom three now, but we've got a game in hand and every game is a cup final to us."

Man City's Pep Guardiola: "Three times in a row is a big success. It's the consistency and being there every day. It's incredible. 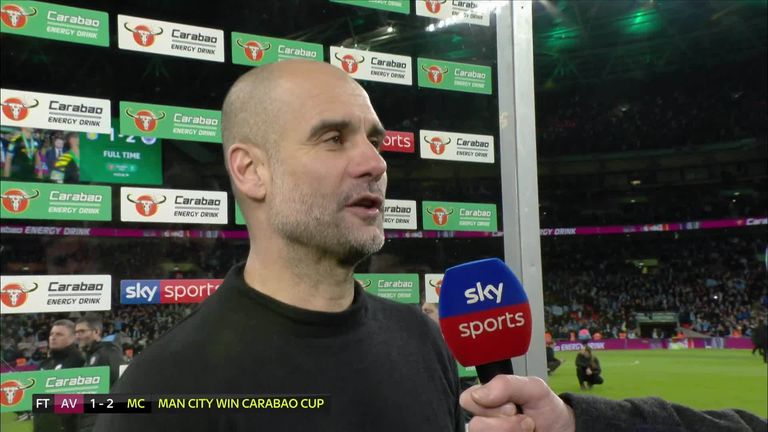 "It was awesome. I think we struggled in the first minutes and the last ones. They had two clear chances in the first minutes, the header and the corner. But we played really well, especially second half with the 2-1. Sometimes you don't know if you attack or just keep the result."

Man City are just the second side to win three consecutive League Cup titles after Liverpool between 1980-81 and 1983-84 (4 in a row). Indeed, only Liverpool (8) have won the competition more times than Man City (7).

Man City boss Pep Guardiola has won 21 of his previous 25 finals as a top-flight manager, including all six with City (2 Community Shields, 3 League Cups, 1 FA Cup).

Manchester City's Phil Foden has been directly involved in nine goals in his 10 starts in all competitions this season (2 goals, 7 assists).

There's a quick turnaround for Manchester City, who travel to Hillsborough to take on Sheffield Wednesday in the FA Cup fifth round on Wednesday evening at 7.45pm.

Aston Villa have some time to recover, however. They take on Leicester in the Premier League on Monday March 9, in a game that is live on Sky Sports Premier League.