Highlights and report as Wolves move to within two points of the top four, while Villa remain in the relegation zone 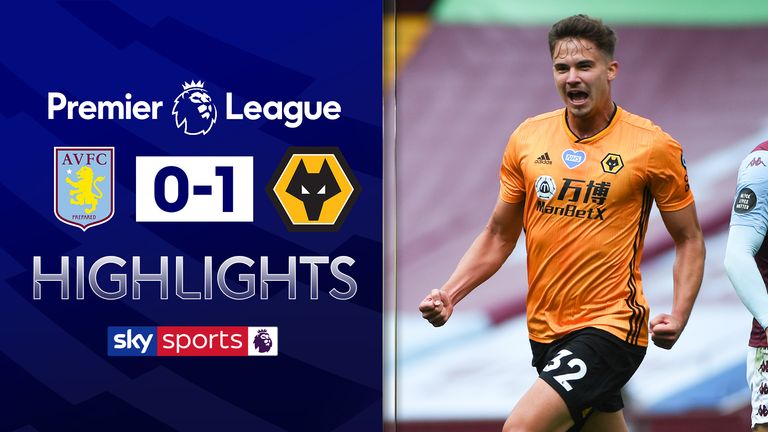 FREE TO WATCH: Highlights from Wolverhampton Wanderers' win against Aston Villa in the Premier League.

Wolves kept up their 100 per cent record since the Premier League's return with a 1-0 victory at Aston Villa on Saturday.

Wolves waited just over an hour for their opener as Leander Dendoncker fired into the bottom right corner from 15 yards (62), and the visitors deserved the victory on balance, also going close in the first half through Diogo Jota as he capitalised on Orjan Nyland's error.

The result keeps Wolves in the race for an unprecedented top-four finish, leaving them two points off Chelsea having played a game more, while Villa remain in deep trouble, 19th in the Premier League but level on points with 17th-place West Ham.

How Wolves ground another win and clean sheet

Villa started the game with more of the ball but very little bite, and were forced into an early change as Matt Targett was replaced by Neil Taylor after feeling his hamstring.

Wolves came closest in the first half as Nyland did his best to gift the visitors a goal; the Norwegian goalkeeper bizarrely miscued his throw out straight to Jota, but he snatched at it and blazed harmlessly over the bar from the edge of the box, despite having time to drive at goal.

The second half continued in the same vein, before explosive former Villa winger Adama Traore was brought on after an hour to target sub left-back Taylor.

Traore played a hand in Wolves' opener shortly after, making a nuisance of himself before spreading to Raul Jimenez; the Mexican then found Jonny in the box, who wrestled for the ball and set up Dendoncker, and the midfielder expertly found the bottom left corner from just inside the box.

That's how it stayed, with little in the way of clear-cut chances, meaning Wolves have won three from three since the restart, conceding no goals.

Defensively, Wolves were brilliant, restricting Villa to a lot of the ball on the edge of the final third, but little inside any area of danger. For Villa, their lack of urgency or ideas is a worry going into the final six games, with tough fixtures against Liverpool (away) and Man Utd (home) up next.

Aston Villa's Dean Smith: "We're the only team to play four games in 11 days and three in the last six. We could do with a bit more help on that, why it's not played on Sunday or Monday to give both teams a chance to recover I don't know. It's ridiculous to ask the players to play that amount of games in a short space of time.

"There's a lot of belief in the dressing room and we'll be working hard. We'll stay up by fighting, working hard, being as solid as we have been and when we are fresh hopefully showing a bit more quality in the final third."

Wolves boss Nuno Espirito Santo: "We have a good week now to recover. It's a tough cycle, this was a third game in a week and we know what is in front of us. We have to prepare ourselves for the next challenge.

"We know what is in front of us, we know how we do things. The how is more important, how we prepare ourselves for the next one. We have to reinvent ourselves for a tough challenge."