Pierre-Emerick Aubameyang scored twice as Arsenal returned to winning ways with a 3-1 victory over Burnley at the Emirates.

Aubameyang's 11th goal of the campaign handed Arsenal a half-time lead in the Premier League for the first time this season.

The Gabon international then added a clinical second on the counter on 48 minutes to take his tally to 12 for the season.

Ashley Barnes pulled a goal back for Burnley but Alex Iwobi's third in stoppage-time saw Arsenal end a two-game losing streak that moves them level with fourth-place Chelsea and leaves the Clarets in the relegation zone.

Man of the Match: Sead Kolasinac.

A pulsating start saw both sides register attempts on goal in the opening three minutes, as Ainsley Maitland-Niles' low drive drew Joe Hart into a reflex save, seconds before Ashley Westwood's effort to flicked behind off the foot of Bernd Leno at the end of an immediate Burnley counter.

Granit Xhaka called Hart into action on seven minutes with a curling effort from the edge of the area, and it was not long until the Arsenal pressure told.

Mesut Ozil, restored to the Arsenal line-up as captain, dissected the Burnley defence with a pass which Sead Kolasinac kept in play, allowing Aubameyang to drift into through the static defence to poke home into the far corner.

Barnes and Sokratis Papastathopoulos were involved to two heated altercations before the interval, but the Gunners kept their heads to go into the break ahead for the first time in the league this season.

Mesut Ozil returned to captain Arsenal as Unai Emery made six changes to the side that lost at Southampton. Mohamed Elneny made his first PL appearance of the season while there were recalls for Alexandre Lacazette, Sokratis, Ainsley Maitland-Niles and Sead Kolasinac. Chris Wood and Jeff Hendrick replaced Aaron Lennon and Robbie Brady as Burnley made two changes following their defeat at Tottenham.

One became two three minutes into the second half as Kolasinac and Lacazette combined at pace on the counter, before Aubameyang clinically doubled his tally with a thunderous near-post drive.

Arsenal maintained a measure of control from there but made sure of the victory in stoppage-time when substitute Iwobi, played onside by Mathew Lowton, fired a third past Hart after Ozil's blocked shot deflected into his path. 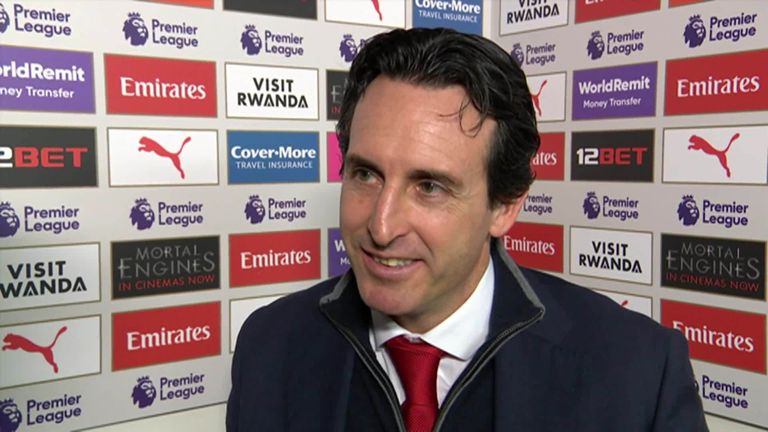 Arsenal manager Unai Emery claims his side were prepared for a tough physical challenge against Burnley in their 3-1 in the Premier League.

Unai Emery: "We expected long balls, section actions, pushes - they also have good players and their attacking players created problems for us. And then we needed to impose our game plan, but we worked very well today, it was a tough match like we expected and we are happy with this victory.

"Physicality is part of football and you need to be physically strong. Both teams needed to impose themselves physically and with quality. We imposed our game plan in our moment and this victory is a consequence of this and we are pleased with this." 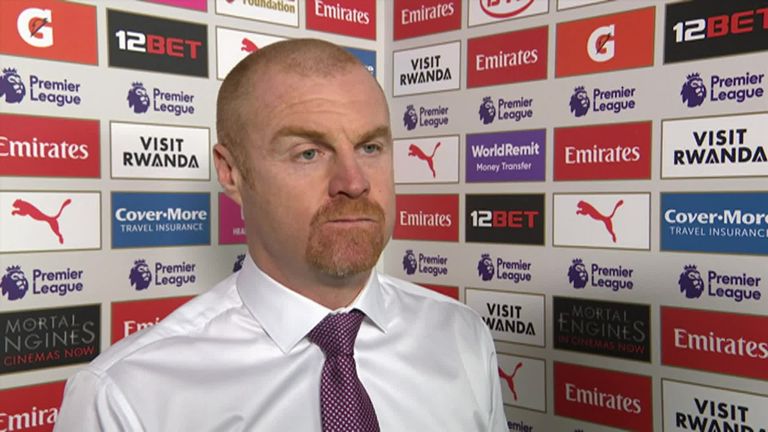 Burnley manager Sean Dyche was disappointed that Arsenal were not penalised on two occasions for diving in the Clarets' 3-1 defeat at The Emirates Stadium in the Premier League.

Sean Dyche: "No one wants to see diving in the game. There was one with [Granit] Xhaka later in the game and I know he dives as he looks at the ref within a millisecond of going down in the box. I do not want to see that and I do not think anyone else wants to see that

"Ashley Barnes comes out of a tackle and their lad clearly elbows him, but our lad comes out with a booking, which is nearly impossible. There were two dives in the game and no one got a booking. One of them was already on a booking, so that's a red card."

It would have been interesting to see if the VAR would have agreed with Sean Dyche’s view that Burnley were denied a penalty when Sead Kolasinac pushed Burnley defender Kevin Long in the back in the second half.
However, there is no doubt that Arsenal’s late third goal would have been disallowed for offside after Alex Iwobi had just strayed offside.

Man of the Match - Sead Kolasinac

Aubameyang may have scored two goals but the Kolasinac scooped the Sky Sports award. The Bosnian was resolute in defence against a Burnley side committed to making Arsenal fight from the first whistle. While his defensive quality has been up for debate, Kolasinac's quality in the other direction was evident for all to see. And when tempers flare, he was on hand with a mature performance was guided Arsenal back onto the winning path.

Arsenal travel to Brighton for the teatime kick-off on Boxing Day, live on Sky Sports Premier League, while Burnley host Everton at Turf Moor earlier on that day.