Report as Arsenal stay top of Europa League Group B with 3-0 win at the Emirates courtesy of Eddie Nketiah, Joe Willock and Nicolas Pepe but manage only six shots on target all night against Irish visitors Dundalk

Eddie Nketiah, Joe Willock and Nicolas Pepe scored within four minutes either side of half-time to give Arsenal a 3-0 win over Dundalk.

The Gunners took more than half an hour to test 39-year-old goalkeeper Gary Rogers as their predictable play proved too easy for the visitors to defend, as the League of Ireland champions looked likely to hold their hosts to a scoreless draw at the break.

But the 39-year-old handed them an opener three minutes before the interval when missing Reiss Nelson's corner and allowing Nketiah a simple tap-in from close range, before Willock beat him with a rising finish moments before the break to put Arsenal in full control.

Pepe's stunning third less than a minute after the restart killed the game as a contest but Mikel Arteta, who lamented his side's finishing ahead of the game, may have been left frustrated to see his side dominate possession and territory but muster only six shots on target across the 90 minutes - and fail to test Rogers for the rest of the second period en route to victory.

Dundalk offered Arsenal an early warning sign in the Gunners' first competitive game against Irish opposition as Patrick McEleney forced debutant Runar Runarsson into an early save three minutes in, and while Arteta's side enjoyed the lion's share of the play from that moment on, they lacked penetration with it.

Runarsson's opposite number Rogers waited 34 minutes to make his first save of the night to tip Sead Kolasinac's header over for a corner, but within 10 minutes would have shipped twice to put Arsenal in full control.

The 39-year-old played his own part in the opener, coming for and totally missing Nelson's corner and allowing Nketiah a tap-in into an empty net, moments after the forward had fired wide from close range when given little time to react to another corner deflected into his path.

Dundalk had barely restarted by the time Rogers was picking the ball out of his net again, with some fluid movement from the hosts seeing Nketiah find Pepe in the middle, before Willock fired above Rogers.

Filippo Giovagnoli had not brought his Dundalk side to make up the numbers and made a change at the break, but within a minute of the restart saw his hopes of an unlikely comeback extinguished.

Arsenal re-emerged looking like a side on the end of a firm talking to from Arteta after a lacklustre first 45 minutes and a quick move between Willock and Pepe on the edge of the box gave the latter space to fire past Rogers with a peach of a strike on his right.

That third goal took the sting out of the tie and Arsenal rarely looked like adding a fourth, even as they continued to dominate possession and territory.

Nketiah failed to connect with a Willock centre and fired well over from Willock's pull-back before substitute Kieran Tierney did likewise from a tight angle, while Nelson's drive whistled past Rogers' far post late on.

But the Gunners had already done their job, and moved within touching distance of the knock-out stages at a canter, with six points secured from their opening two games.

Man of the match - Joe Willock

Where some other aspects of Arsenal's performance were sluggish and predictable, Willock's directness and tempo in possession saw him make Arsenal's third goal, score their second and have a major hand in their first.

He could have enjoyed even more success had Nketiah turned home his tee-up in the second half, but has certainly put himself in the frame for a starting berth against Manchester United on Sunday. 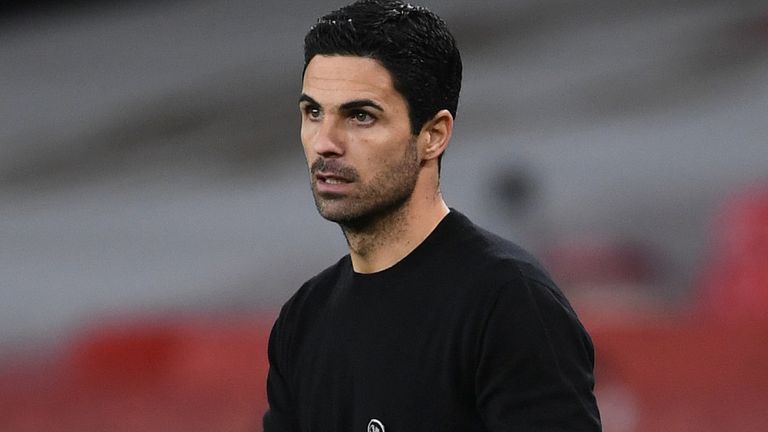 Arsenal manager Mikel Arteta told BT Sport: "I think we made it look easy because we were very disciplined, took it seriously, and at it right from the beginning. We've seen in other games if you are not 100 per cent what can happen.

"We made a lot of changes, we gave a lot of opportunity to players who deserve it and I think they performed well.

"We have a large squad and I wanted to give opportunities to everybody, they've been patient and trained well. Today they proved they are well prepared when we need them. They made things more difficult for me for selection. I am very pleased for their performance and how they reacted today."

Dundalk travel to St Pat's Athletic on Sunday, hoping to claw back some ground on second-placed Bohemians in the Irish Premiership; Kick-off at 5.45pm.