Arsenal vs Leeds United. The FA Cup Third Round.

Reiss Nelson's goal sent Arsenal into the fourth round of the FA Cup after Leeds failed to capitalise on a dominant first-half display at the Emirates Stadium.

The Sky Bet Championship leaders were outstanding before the break, showing their Premier League credentials as they attempted 15 shots to Arsenal's three and registered more than 60 per cent possession, but their wastefulness was punished when Nelson struck soon after half-time.

The 20-year-old, one of only two youngsters in an experienced Arsenal line-up along with Matteo Guendouzi, converted from close range after Nicolas Pepe and Alexandre Lacazette had combined on the right-hand side.

Arsenal dominated the rest of the second half and missed chances to extend their lead further, with substitute Gabriel Martinelli forcing a fine one-handed save from Leeds goalkeeper Illan Meslier, but the 1-0 scoreline was enough to set up a fourth-round tie away to Bournemouth.

Man of the match: Emiliano Martinez

How Arsenal recovered to beat Leeds

Arsenal's line-up was considerably stronger than many had anticipated, with Mikel Arteta only making four changes from last week's win over Manchester United, but their first-half performance could hardly have been more different from the one they put in against Ole Gunnar Solskjaer's side.

As the hosts struggled to string passes together, or even get out of their own half, Leeds were sensational. Marcelo Bielsa rested several key players, giving debuts to goalkeeper Meslier and midfielder Robbie Gotts, but their passing game was too slick for Arsenal, their pressing too intense.

They created a succession of chances. Jack Harrison was first to test Emiliano Martinez, unleashing a powerful drive the Arsenal goalkeeper could only parry in the 14th minute. Soon after that, Patrick Bamford struck the top of the bar following a clever one-two with Luke Ayling.

Arsenal players could be seen arguing among themselves as Leeds kept coming forward. Martinez was forced into another scrambling save from Kalvin Phillips' free-kick, then Ezgjan Alioski, who was giving makeshift right-back Sokratis a torrid time, flashed a diagonal effort narrowly wide.

Arsenal mustered their first chance after half an hour, when David Luiz headed a few yards wide from Mesut Ozil's corner, but Leeds continued to dominate, with Martinez again coming to Arsenal's rescue, this time from Alioski, and Gotts slicing a clear chance over the bar soon after that.

By half-time, Leeds had attempted as many shots as any other side in any game against Arsenal all season, but they would soon regret not making their dominance count.

Arteta's half-time team talk had an immediate effect, with Nelson's bundled opener - only his second goal for the club - arriving after Lacazette had clipped the top of the bar with a free-kick, then sent a low effort too close to Meslier from Ozil's pass.

Leeds struggled to replicate the energy levels shown in the first half, as Arsenal became the ones spurning their scoring opportunities.

Sokratis flicked a header wide from a corner, Martinelli tested Meslier with a low shot from the edge of the area and Lacazette had a penalty appeal turned down.

Leeds continued to battle gamely and did have one opportunity of their own in the final minute of normal time, when Harrison was played through on goal on the left flank, but Sokratis recovered to make an excellent challenge, allowing Arsenal to take their place in the fourth round and giving Arteta his second win as head coach.

Bielsa and Leeds, meanwhile, were left to a rue an outcome which might have been very different had they taken some of their first-half chances. 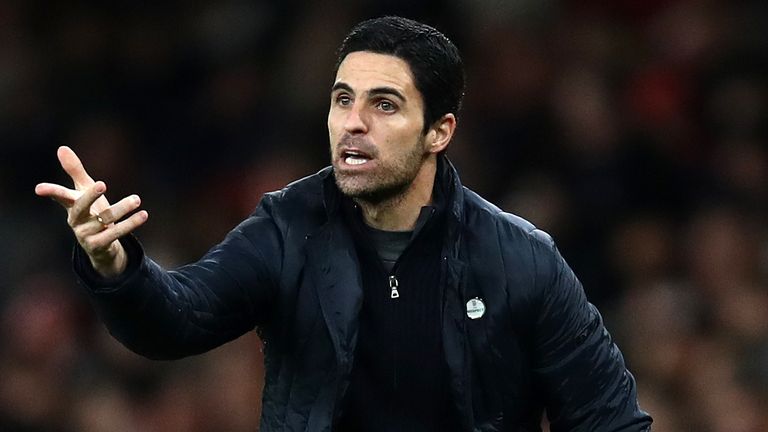 Arsenal boss Mikel Arteta pays tribute to Leeds and says playing them is like 'going to the dentist' after beating them in the FA Cup.

Arsenal head coach Mikel Arteta: "I wasn't happy at all with the first 30, 35 minutes, how we started the game, how we approached the game. When I see what I don't want to see, and I'm not talking about technically or even tactically, I cannot be happy and I have to let them know.

"We had to react and we changed some things but I think the biggest change was how we approached the second half, the mentality, how aggressive we were, how intense we were."

Leeds boss Marcelo Bielsa: "We wanted to beat them and we tried to win the match. The first half was what we hoped for. In the second half we understand it is difficult to keep the same control in the match, but we should have tried to play a more balanced game."

Arsenal are away to Crystal Palace in the Premier League in Saturday's early kick-off, while Leeds host Sheffield Wednesday in the Sky Bet Championship at 3pm on the same day.