Match report as Arsenal's Europa League campaign ends at hands of Unai Emery's Villarreal; Spanish side led 2-1 from first leg; Pierre-Emerick Aubameyang struck post twice on frustrating night for the Gunners; Villarreal held on to book place in final in Gdansk against Man Utd on May 26

Arsenal's season was left in tatters as Villarreal held on for a 0-0 draw at the Emirates Stadium to secure a 2-1 aggregate victory and a place in the Europa League final against Manchester United.

Following a 2-1 defeat in Spain in the first leg last week, the Gunners were sluggish as they tried to find the goal they so desperately needed, but they did have chances.

Pierre-Emerick Aubameyang's volley struck the outside of the post in the first half and the Gunners skipper's header hit the inside of the upright and bounced out with 11 minutes remaining.

The hosts, who threw on Gabriel Martinelli, Alexandre Lacazette and Willian in the closing stages, piled forward, but it was not to be their night as Unai Emery got the better of his former side, with Villarreal reaching their first European final, where they will face United in Gdansk on May 26.

Meanwhile, defeat in the tie capped yet another bad night in what has been a difficult campaign for Mikel Arteta and Arsenal. The Gunners now face the prospect of not qualifying for European competition for the first time in 25 years.

How Arsenal's season was left in tatters...

Arsenal were forced into a late change to their starting line-up as Granit Xhaka pulled up with an injury in the warm-up. Kieran Tierney, making his first appearance since April, came into the side at left-back after returning from injury, and he was made to work straight away after a confident start from Villarreal.

There were nervy moments for the Gunners in the opening 20 minutes and the closest the visitors came was a Dani Parejo free-kick, which flew just over Bernd Leno's crossbar.

At the other end, Arteta's men were yet to click into gear, but they almost snatched the lead in the 27th minute. The ball dropped kindly for Aubameyang and his well-struck volley had goalkeeper Geronimo Rulli beat, but the ball clipped the outside of the upright.

Man of the match: Francis Coquelin.

Villarreal then had to contend with an injury blow of their own and they were forced into an immediate change when Samuel Chukwueze, who went down with no one around him, was stretchered from the field and replaced by Yeremi Pino.

It was a tight, tense affair at the Emirates Stadium, but Arsenal eventually injected some life into the game as Emile Smith Rowe burst forward before releasing Aubameyang. The striker, in his favoured position over on the left, cut inside before forcing Rulli into action, and the goalkeeper clawed the ball away from goal after spilling the initial strike.

Villarreal would have been happy with their work in the opening 45 minutes, keeping Arsenal relatively quiet, but, after a lacklustre first half, the Gunners came out with much more urgency for the second half.

Villarreal were still a threat on the counter attack, and with the game starting to get stretched, Gerard Moreno had a glorious chance to make Arsenal's task even more difficult, but the Spanish forward could only hit his shot straight at Leno.

Bernd Leno returned in goal with Rob Holding and Pablo Mari recalled at the heart of defence, while Thomas Partey, Bukayo Saka, Emile Smith Rowe and Nicolas Pepe - who scored the away goal in the first leg - all came into the side.

The Gunners were also forced into a late change to the starting XI as Granit Xhaka picked up a knock in the warm-up. Kieran Tierney came into the side at left-back.

Arteta looked to his bench for inspiration, bringing on Martinelli, and the hosts began to build some pressure again as Rob Holding headed agonisingly wide after meeting Pepe's cross.

There was more frustration moments later as Aubameyang rose highest to meet Bellerin's cross but his header hit the inside of the post and bounced out.

It proved to be his final contribution as fit-again Lacazette replaced the Arsenal captain, while Willian came on for Tierney as the Gunners searched for the goal they needed, but Villarreal defended resolutely as they held on for a famous victory.

Arteta: We are devastated 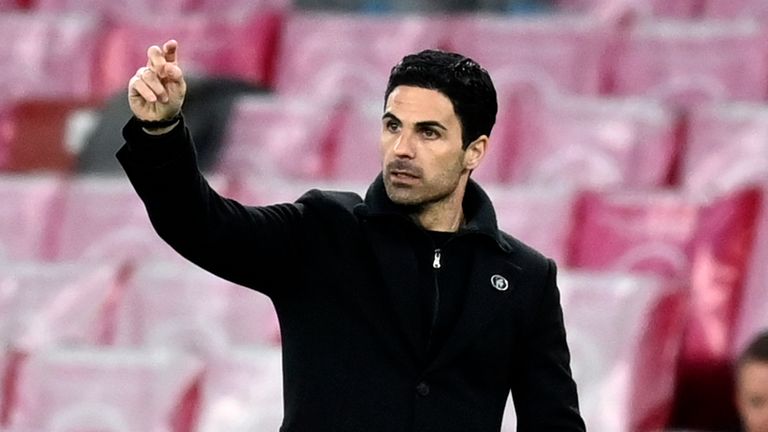 "We are devastated. Really disappointed. We have to congratulate Villarreal. We tried everything until the last minute. I think we deserved to win the game but the details define these ties.

"We had three big chances, they didn't have anything but they are through. So many things happened to us, and so many players were just trying to compete not at their best."

On why Arsenal lost, he added: "It's various things. The way we started in Villarreal wasn't good enough. We didn't arrive here in the best moment with everyone in their best condition. For 90 per cent of them it was their first semi-final and we have to learn."

"The only way [to qualify for Europe] is through the Premier League so we know what we have ahead of us. Today is a big disappointment because we tried everything."

When is the Europa League final?

The final will take place in Gdansk, Poland on Wednesday May 26 with the game kicking off at 8pm, UK time.

The Gdansk Arena was originally intended to host the 2020 showdown but the coronavirus outbreak caused the closing rounds of the 2019/20 competition to be staged in Germany.

The Polish authorities have confirmed that up to 9,500 spectators - 25 per cent of the stadium capacity - will be permitted.

VAR will continue to be used in the final, while five substitutions are allowed, with a sixth permitted for each side if the game goes to extra-time.

Man of the match - Francis Coquelin

If it was not a hard enough night already for Arsenal fans with the Gunners crashing out of Europe at the hands of their former manager Unai Emery, it was another former Gunner, who bossed the game from central midfield.

Coquelin was superb for the Spanish side, shielding his defence excellently, putting out plenty of fires and covering so much of the ground he knows so well.