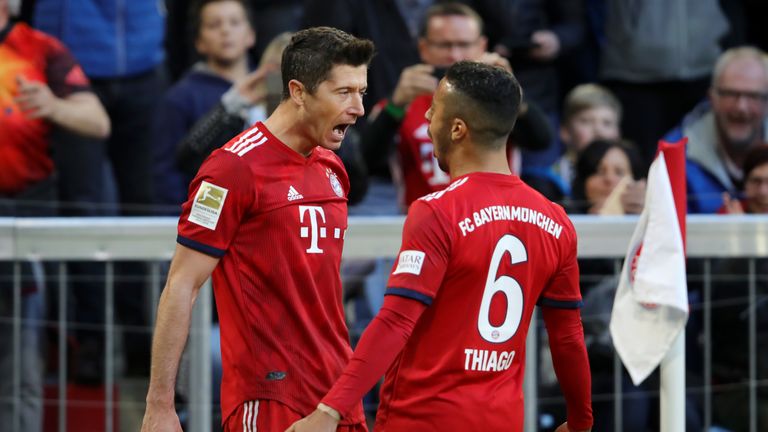 Bayern Munich thrashed Borussia Dortmund 5-0 to take over top spot in the Bundesliga on a landmark night for Robert Lewandowski.

The 100th league instalment of 'Der Klassiker' was a one-sided affair as Mats Hummels, Lewandowski, Javi Martinez and Serge Gnabry had Bayern in dreamland before the break.

Lewandowski put the gloss on the rout with Bayern's fifth in the final minute and the German champions are now in pole position to reclaim their title.

Bayern were nine points adrift of Dortmund in December, but the Bavarians are now one point clear of their rivals with six games of the season remaining.

Dortmund had the perfect chance to shock Bayern within six minutes when Jacob Bruun Larsen and Marco Reus combined to set up Mahmoud Dahoud from 16 yards.

Dahoud was unmarked and had the goal at his mercy, but he could only strike the outside of a post with the returning Manuel Neuer beaten in the Bayern goal.

It was to prove a costly miss, with Bayern ahead within four minutes as the former Dortmund defender Hummels headed home Thiago Alcantara's corner.

The Pole ran onto the loose ball and chipped it over the head of advancing goalkeeper Roman Burki to volley into an empty net.

It was a wonderful piece of opportunism and took Lewandowski level with Muller on 14 goals as the highest scorer in this fixture.

The goalkeeper tipped a Thomas Muller header onto the crossbar and then denied Hummels and Lewandowski as Bayern threatened to score from every attack.

But Bayern's third goal arrived after 41 minutes, Martinez sweeping home from the edge of the area after Burki had parried Thomas Muller's close-range volley and Dortmund had failed to clear the danger.

The visitors were in disarray again two minutes later as Gnabry met Thomas Muller's cross to score with a powerful downward header.

The second half lacked the intensity of the first period, with both sides almost conserving their energies for the crucial games to come.

Gnabry fired wide as Bayern found late impetus and Lewandowski, at full stretch, sent his shot over the crossbar from six yards.

Lewandowski picked up a booking after being involved in a couple of heated incidents with Dortmund defenders, who seemed keen to rattle him.

But Lewandowski had the final word after he was denied by a brave block from substitute Julian Weigl.

Gnabry broke down the right for the umpteenth time and teed up Lewandowski, who had the simple task of finishing from a few yards out to become the highest scorer in 'Der Klassiker' history.

RB Leipzig strengthened their push for a Champions League place as they twice came from behind to win 4-2 at Bayer Leverkusen and move three points clear in fourth place.

Kai Havertz put Leverkusen ahead from the spot in the 11th minute and although Marcel Sabitzer soon levelled, it was 2-1 to the hosts when Havertz fired in after a 23rd-minute corner.

But Leipzig came good in the second half, with Timo Werner levelling in the 64th minute before Emil Forsberg's penalty and a brilliant Matheus Cunha goal won it.

Eintracht Frankfurt stayed fourth after a late, late penalty from Luka Jovic earned a 2-1 win over the 10 men of Schalke.

Ante Rebic put Eintracht ahead with a close-range effort after 13 minutes but Schalke levelled through Suat Serdar eight minutes later.

It stayed like that until a remarkable period of time added on at the end of the second half.

Serdar would be sent off for a poor challenge on Filip Kostic in the fourth minute of additional time before Daniel Caligiuri handled in the area.

After VAR took a look, the game was in the ninth minute of stoppage time when Jovic scored from the spot.

Neither Stuttgart nor Nurnberg did much to ease their relegation worries as they shared the points in a 1-1 draw, with Stuttgart's Ozan Kabak levelling 15 minutes from time after Matheus Pereira scored in the first half.

Hannover remain rock bottom after a 3-1 loss to Wolfsburg. The visitors led through Hendrik Weydandt's goal on the half hour but Wolfsburg quickly levelled through Renato Steffen, who then made it 2-1 in the 71st minute before Jerome Roussillon finished it off.

Benito Raman's brace gave Fortuna Dusseldorf a 2-1 win at Hertha Berlin as they moved above their opponents in mid-table.

Marko Grujic cancelled out Raman's 35th-minute opener but he struck again just after the hour.