Report and highlights from the Sky Bet Championship clash between Blackburn Rovers and Norwich at Ewood Park as Teemu Pukki scored twice in a narrow win for the Canaries; Harvey Elliott struck for the home side. 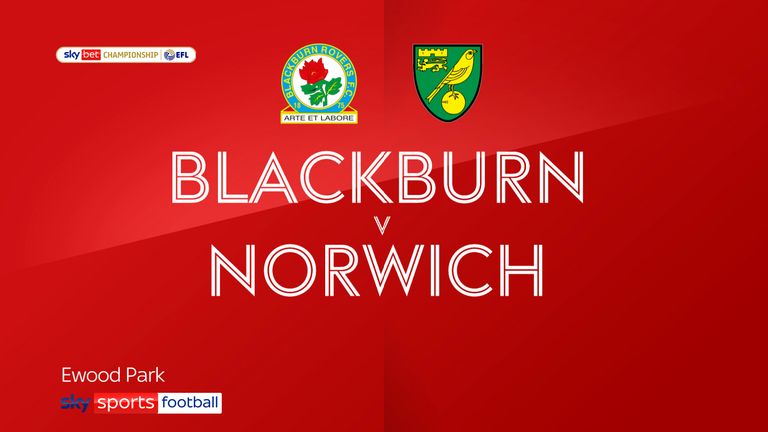 Highlights of the Sky Bet Championship match between Blackburn Rovers and Norwich City.

The Finn was the difference between the sides, firing the Canaries ahead with a clinical finish midway through a first half which they dominated and in which he also struck the woodwork.

Rovers deservedly levelled through a special Harvey Elliott goal shortly after the restart before the instinctive Pukki restored Norwich's advantage in the 65th minute.

It was harsh on Blackburn, who were in the midst of an onslaught on the Norwich goal and also struck the woodwork before and after the equaliser but were hit by a body blow from the Finn when on top.

Those instincts are vital in any promotion race and Pukki delivered once again, maintaining Norwich's three-point cushion at the summit, as they made it three wins on the bounce.

Blackburn still haven't defeated a side in the top half but will feel hard done by after rallying to get back in the game, with their three-match winning run at Ewood coming to an end.

Both managers made a solitary change from last time out - captain Darragh Lenihan returned from suspension for Rovers while Daniel Farke recalled Alex Tettey in midfield.

Pukki made no mistake in the 22nd minute when Tettey had space on the left and his cross found the Finn at the near post and he turned sharply before firing past Kaminski at the near post.

They should have extended their lead before the break when Emi Buendia's cross found Pukki in acres of space but his shot crashed back off the crossbar and Kaminski's leg blocked Jacob Sorensen's rebound.

Rovers came out all guns blazing after the restart, with Gallagher's 25-yard effort clattering the woodwork.

They got a deserved equaliser in the 59th minute through the impressive Elliott, who drove into the area, skipped easily beyond Grant Hanley before calmly slotting past McGovern from a tight angle for his third goal this season.

Norwich sucker-punched their hosts in the 65th minute, taking a lead they scarcely looked like regaining.

The Canaries broke forward and though Ryan Nyambe cleared, it fell as far as Buendia, whose speculative shot was re-directed by Pukki and completely wrong-footed Kaminski for his ninth goal of the season.

City saw out the game professionally afterwards and would have had a third but for Kaminski saving Marco Stiepermann's point-blank effort.

Blackburn's Tony Mowbray: "I think it was a [winning] goal out of nothing. I think it was a goal in isolation really. I think we were the dominant team. I didn't think after we'd scored we were going to stop doing what we were doing, attacking and creating chances, and would maybe win the game.

"Then out of nothing really, a shot from 20-odd yards that he slashes a little bit, was deflected in. We have to accept it. We didn't get anything from the game. It was a bit harsh on us but there you go, that's football."

Norwich's Daniel Farke: "Teemu is fantastic and we all should value what a player we have. Quality player and also quality personality. It was one of his best games in a yellow shirt. Not just because of his two goals but because of his workload. He was relentless in his pressing. He won so many balls.

"When you go back to how we scored the second goal, he was crucial to win the ball with his pressing. He creates so much space for his team-mates with his movement. He always provides an offensive threat and he knows at the moment we have to play without some key players."