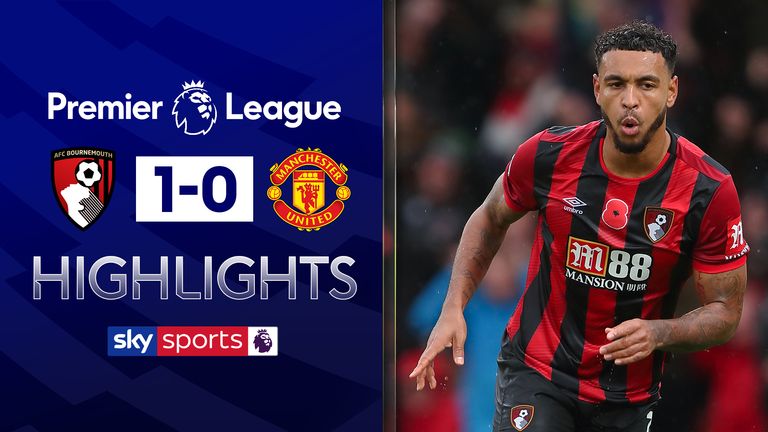 Josh King's first-half goal dented Manchester United's recent recovery as they were beaten 1-0 by Bournemouth at the Vitality Stadium.

King flicked the ball over Aaron Wan-Bissaka before beating David de Gea in first-half stoppage time as Bournemouth ended a run of 358 minutes without scoring.

They could have added to their lead after half-time, but De Gea pulled off a fine stop to keep out Harry Wilson's low effort, and was grateful to Fred for blocking another Wilson shot after the goalkeeper had slipped.

Man of the match: Nathan Ake

United enjoyed plenty of the ball but Aaron Ramsdale's goal was never in too much danger until substitute Mason Greenwood struck the post from close-range moments after coming on, but that miss meant Bournemouth leapfrogged their visitors and ended their run of three straight wins.

Bournemouth bring United back to earth

There was a sense of anticipation that United might be back on the right track coming into the game, having finally broken their away duck and even won at Stamford Bridge in midweek, but that enthusiasm did not last long.

The visitors controlled the opening 20 minutes without creating a chance of note and when Bournemouth finally improved, they immediately looked the most dangerous.

And with Dan James' 25-yard effort, which whistled wide, looking like it would be the closest either side came before half-time, King controlled Smith's cross with his back to goal, bamboozled a static Wan-Bissaka with a deft flick and beat De Gea in injury time.

Manchester United were unchanged from their 3-1 win at Norwich last weekend.

That changed the dynamic and Bournemouth used that momentum to good effect after the break, picking up where they left off and taking every opportunity to run at the United defence.

Harry Wilson could perhaps have doubled their lead when De Gea slipped clearing namesake Callum's cross, but his hesitant placed effort was easy to deal with and clear.

He came closer when teed up by Callum once again, taking a touch on the edge of the area before forcing De Gea into a fine low save.

With time running out United's urgency was still lacking but the introduction of Greenwood did almost bear fruit, with the youngster inches away from his first Premier League goal when he struck the post from Fred's cross.

The visitors' lack of intensity was stark but Bournemouth's defensive unit deserved plenty of credit, as they held on comfortably to register a third successive clean sheet and leave United back at square one.

Man of the match - Nathan Ake

A number of Bournemouth players gave themselves a good chance for the man-of-the-match award but Bournemouth's defensive unit was as impressive as anything else on the pitch, as they kept United to mainly half-chances.

Ake won the ball more times (12) than anyone else on the pitch, while he also had the best passing accuracy (89.7 per cent) of the whole Bournemouth line-up.

Manchester United welcome Partizan Belgrade to Old Trafford in the Europa League on Thursday night at 8pm, while Bournemouth's next game takes them to Newcastle on November 9 at 3pm.