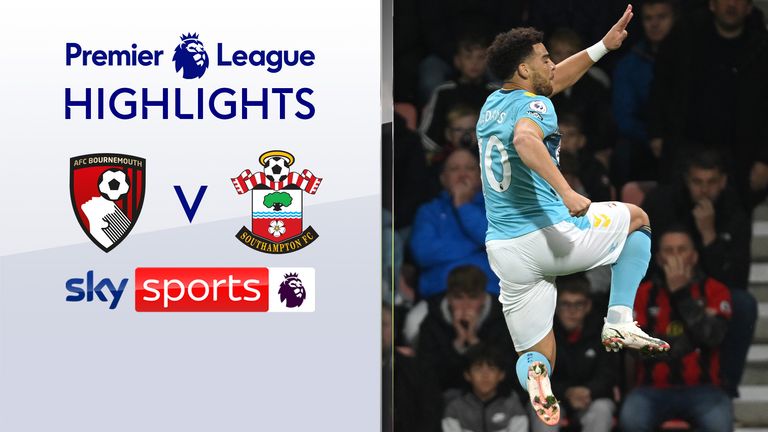 FREE TO WATCH: Highlights of Southampton's win over Bournemouth in the Premier League

Southampton climbed out of the relegation zone and eased some of the pressure on manager Ralph Hasenhuttl by beating rivals Bournemouth 1-0 at the Vitality Stadium.

Che Adams' brilliant early header (9) was the difference on the south coast as the visitors ended a five-match winless run in the Premier League.

Despite dominating the second half, Bournemouth struggled to create clear-cut chances and failed to break down a determined Southampton, who secured their first victory since the end of August.

The result also saw the Saints record their first clean sheet in the league since a 1-0 win over Arsenal in April. They move up to 14th in the table.

"It was an important win, no question, and I think it was a deserved one," Hasenhuttl said.

"We have this belief all the time because we see the games, we see that there are margins missing.

"The problem in the Premier League is sometimes the margins can be enough to concede a goal and to lose games.

"But sometimes the margins you have to put on your side and then you win the games and this was the challenge to find these margins and to find the key for having a clean sheet, for scoring this one goal and also winning with one goal.

"In the end it's a win for the whole group."

As for Bournemouth, their unbeaten start under interim head coach Gary O'Neil is over after seven games. They sit 11th.

Southampton made the short journey along the south coast having won just three of their previous 22 Premier League matches, but they made the perfect start when Che Adams' exquisite header from a Romain Perraud cross put them in front on nine minutes.

Bournemouth responded well to going behind but were nearly two down when Joe Aribo went close to poking the visitors in front on the half-hour mark. Seconds later, though, and the hosts were almost level when Southampton goalkeeper Gavin Bazunu palmed away a long-range strike from Philip Billing.

Lewis Cook then fired a free-kick over the bar and Marcus Tavernier lashed wide late in the half as Bournemouth continued to search for an equaliser. There was also some brief drama in the closing minutes when Chris Mepham and Saints midfielder Ainsley Maitland-Niles were both booked for a fiery head-to-head clash sparked by a lunging challenge from the Cherries defender.

Bournemouth were unchanged following their 2-2 draw with Fulham at the weekend.

The only alteration to their matchday squad came on the bench, with Jack Stephens unable to feature against his parent club. Ben Pearson took his place.

Southampton made one change and it was an enforced one after Armel Bella-Kotchap dislocated a shoulder in the 1-1 draw with West Ham on Sunday.

Duje Caleta-Car replaced the defender while Theo Walcott returned to the bench.

Gary O'Neil's side trailed at the break but they started the second half as they finished the first. Barely two minutes had been played when an unmarked Marcos Senesi headed arguably Bournemouth's best chance of the game over the bar from a corner, while Jefferson Lerma saw a long-range effort fly harmlessly off target.

Their relentless pressure continued but a brilliant block from Southampton substitute Lyanco on the 70th-minute mark denied them before Mohammed Salisu survived a VAR check for a potential handball as he blocked a Junior Stanislas cross.

With Bournemouth exposed as they pushed for a goal, the impressive Adams had an opportunity to seal the three points for the Saints but his close-range effort was blocked by Adam Smith.

The lead remained a slender one and Bournemouth thought they had broken Southampton's resistance in stoppage time as Bazunu struggled to deal with a cross to the back post, but Salisu was there to clear off the line to ensure Ralph Hasenhuttl's team held on for their first win since August 30.

It was a much-needed three points for Southampton, who had lost six of their past seven away league games before this fixture and failed to keep a clean sheet in 16 consecutive top-flight matches.

Bournemouth's unbeaten start under interim head coach O'Neil is over, but they have come a long way since that 9-0 thrashing by Liverpool almost two months ago.

Having recruited 10 new players during a hectic summer overhaul, Southampton manager Ralph Hasenhuttl stressed the importance of patience during the resultant transitional phase.

"We know that we have to fight as a group together after an intense transfer window in the summer and there are some phases that you are going through as a club and a team," he said.

"We speak very often about the patience we need to have for them.

"It's not always that you get the patience in this business, especially when you are a little bit long working in a club like I do.

"Sometimes the patience is not - I don't want to say from the fans not always there - but from the whole pressure you have in the Premier League, it's not so easy to go through this.

"But it's the only way we can do it and finally for me it's OK." 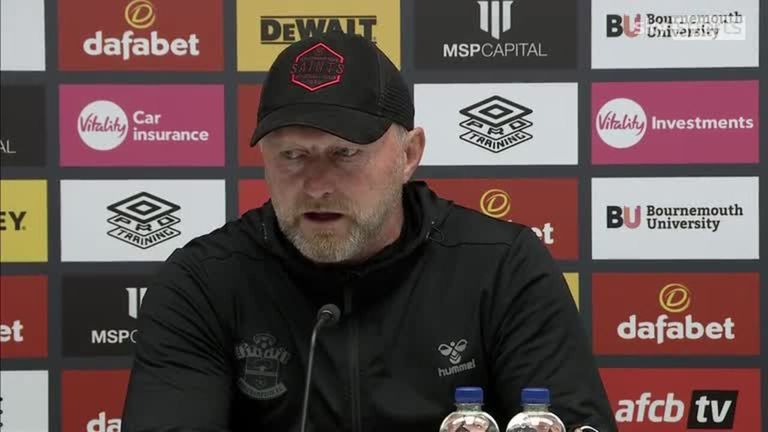 O'Neil: We didn't deserve to lose

Bournemouth interim head coach Gary O'Neil felt the result was harsh and was left perplexed after appeals for a second-half penalty were waved away when the ball struck the arm of Southampton defender Mohammed Salisu.

"Tonight the ball hits their boy Salisu and it's not a penalty.

"It's a tricky one. I don't know. Hopefully, the officials can clear up what it is and what it isn't because I don't see too much difference. 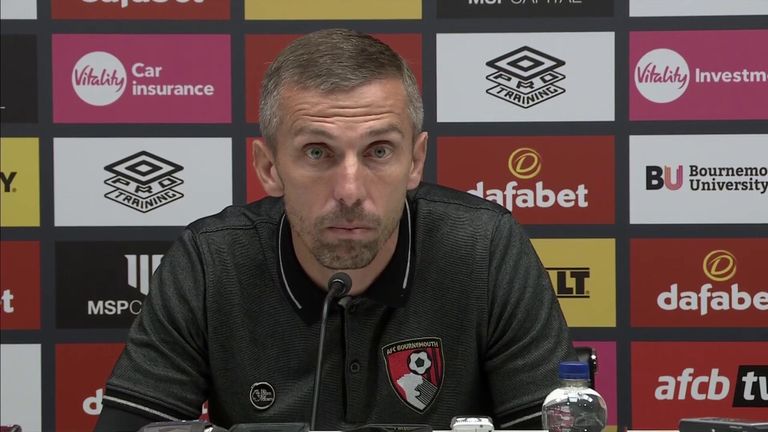 The Saints found themselves in the relegation zone as they made the trip along the south coast to face Bournemouth having lost 15 of their previous 22 fixtures in the Premier League.

That dismal record, as well as their poor form on the road and their inability to keep clean sheets, all pointed towards another disappointing day for the Austrian.

But you never know quite what to expect from them. From an impressive win over Chelsea at the end of August to five matches without a victory, Hasenhuttl's side have now ended Bournemouth's impressive unbeaten run.

Southampton are the most unpredictable team in the Premier League, but that's why there is always hope for them and hope for Hasenhuttl. They welcome table-topping Arsenal to St Mary's on Sunday. It would be foolish to write them off.

Analysis: O'Neil to remain in charge under Foley?

Gary O'Neil is making a serious case to be Bournemouth's next permanent head coach. Before losing to Southampton, he was the only boss with an unbeaten record in the Premier League since replacing Scott Parker on an interim basis at the end of August.

His side may have lost the bragging rights on the south coast, but there is no need for him to panic. Bournemouth dominated large periods of the game - they had 15 shots in total - and on another night would have converted at least one of them.

The result wasn't to be, but the work O'Neil is doing is admirable. It looked like the 39-year-old would initially be at the Vitality Stadium just to steady the ship, but imminent new owner Bill Foley will surely be considering keeping him at the helm permanently once his takeover of the club is officially completed.

Southampton are back in action on Sunday when they host Arsenal at St Mary's, also live on Sky Sports (kick-off 2pm).