Said Benrahma scores the other goal in west London derby. 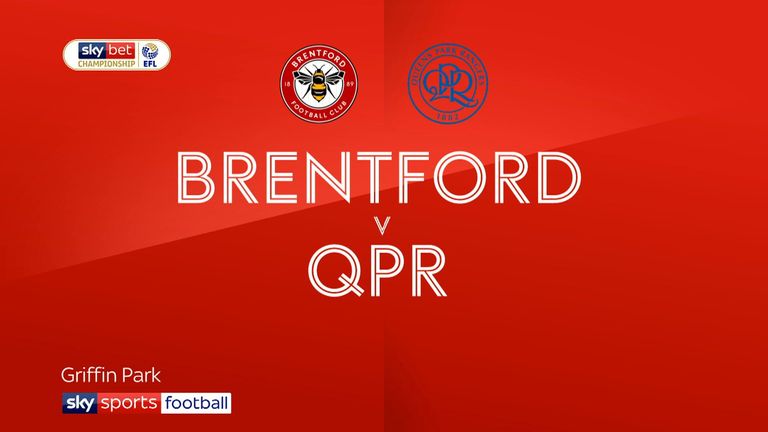 Highlights from the Sky Bet Championship as Brentford and QPR.

Neal Maupay scored one and assisted another as Brentford kept their slim play-off hopes alive with a 3-0 victory against QPR at Griffin Park.

The first half was a drab affair as both sides were struggling to string to passes together.

However, Thomas Frank's men got their noses in front soon after the break when Maupay converted from the spot after Ollie Watkins was bundled over.

Maupay, Brentford's top scorer, showed good awareness to pick out Said Benrahma, who made the points safe before Sergi Canos netted with virtually the last kick of the game.

The first real opportunity came after 22 minutes, when Romaine Sawyers showed great imagination to slide a pinpoint ball through to the nippy Benrahma, but the Algerian nicked his effort well wide when one-on-one with Joe Lumley.

The Bees had netted a mammoth 14 goals in their last four league games and had collected 16 of the last 18 points on offer at their Hounslow fortress.

Wayward passing was costing both sides dearly, but Frank's charges had the chance to make their slight dominance tell just before the break when Benrahma's lofted free-kick was met with a scorching volley from Yoann Barbet that was heading for the top corner before it was blocked.

Both sets of supporters would have expected better from a fixture which has produced 27 goals in the last eight games, but all that changed roughly five minutes into the second period.

A ball over the top from Moses Odubajo fell perfectly into Watkins' path and the former Exeter forward was barged on the back by Grant Hall, with referee Keith Stroud quick to point to the spot.

After a short delay, Maupay dispatched the penalty past Lumley for his 23rd strike this term and the home side were keen to capitalise on going in front.

A flowing move involving Henrik Dalsgaard, Sawyers and Maupay saw the ball find its way to Benrahma, but his close-range effort was smothered well by the visitors' 24-year-old stopper.

However, the three points were sealed with 19 minutes to go and it was Sawyers' vision that was key.

The central midfielder slipped a perfectly weighted pass through to Maupay, who rounded Lumley and despite having the opportunity to take the shot on himself, squared unselfishly for the irrepressible Benrahma to tap home.

The introduction of Matt Smith and Tomer Hemed did little to invigorate QPR, who almost pulled one back when Bright Osayi-Samuel forced a point-blank save from Daniel Bentley in stoppage time.

However, the scoreline became even more emphatic in the final stages, when substitute Canos darted forward and curled a right-footed effort which deflected past the despairing Lumley to add further gloss to an immensely satisfying day for Brentford.

Thomas Frank: "You can say we are a selling club, but then there are only 10 clubs in the world that aren't If we do well and players develop, they will always be a target.

"I know for a fact that players love to play here and stay here and want to develop, but what happens in the future, we don't know. We're just pleased to be together, creating something hopefully special."

Steve McClaren: "We talked about the game plan and stifling the front three. I thought we did that well and I said at half-time I was delighted we had carried on the organisation from Tuesday (a 1-0 win over Leeds).

"The only thing I was disappointed with was that we needed to be better on the ball. We gave the ball away too much and if we can do that better we'll create. We didn't. The first goal is always important and they scored after two or minutes. From then on, I was disappointed."