Report and free match highlights as Hakim Ziyech fired Chelsea ahead in the first half; His effort was cancelled out by Adam Webster's free header on the hour; The Blues have drawn three and lost one of their last four Premier League games; Brighton now unbeaten in five league games 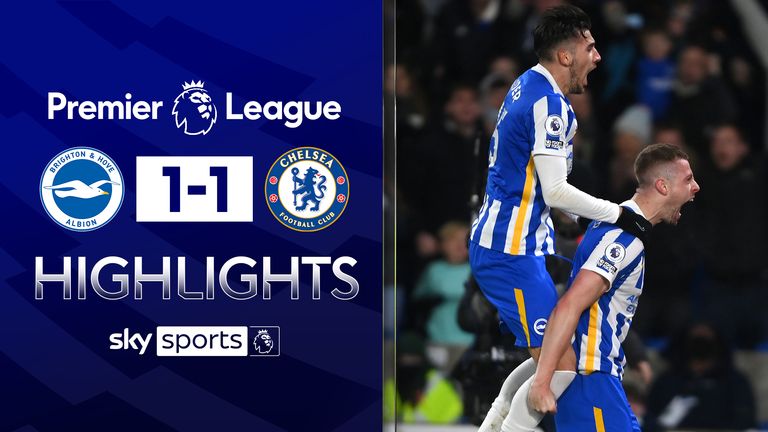 FREE TO WATCH: Highlights from the 1-1 draw between Brighton and Chelsea in the Premier League

Chelsea extended their winless Premier League run to four games and missed the chance to go second in the table after drawing 1-1 with Brighton.

Thomas Tuchel's side could have gone above Liverpool with victory at the Amex Stadium, and they went ahead during a first-half lull as Hakim Ziyech hammered home from the top of the area in the 28th minute.

Brighton showed plenty of promise without much end product and looked headed for another result where the scoreline did not match their performance. But on the hour, an unmarked Adam Webster - named captain for the evening - nodded home to see the Seagulls go five games unbeaten in the Premier League.

Asked to explain the recent poor league form, Tuchel replied: "I answered this question a hundred times, if you look at our situation of long-term injuries, of key players injured, and of Covid and you look at our schedule you will have the answer.

"We are mentally tired and physically tired, you can see it in our performance, it's as easy as that. We need to recharge the batteries, we need to reconnect.

"This is my feeling, that's why I give the players two days off and then we will use Friday and Saturday to prepare for Sunday."

The opening 15 minutes were a quiet affair at a chilly Amex Stadium, and Brighton could have taken an early lead. Danny Welbeck flicked the ball into Jakub Moder's path, but he just sent his effort wide. It took 14 minutes for Chelsea's first shot as Cesar Azpilicueta's effort was tipped over the crossbar by Robert Sanchez.

Since the start of November, Chelsea have won one more Premier League game than Norwich and eight fewer than Man City.

The game continued to meander and out of nowhere, Chelsea took the lead just before the break. It was some neat play between N'Golo Kante and Ziyech on the right before the latter swept the ball under the outstretched leg of Alexis Mac Allister. Sanchez got a hand to it but it fizzed past him and into the back of the net.

Chelsea threatened a second soon after as Marcos Alonso fired a cross in from the left, but Sanchez was there to punch away. Jorginho then skied the rebound into the stands. It was a similar story for Callum Hudson-Odoi just before the break too, who looked certain to score on the angle, but lifted his effort over the crossbar.

Brighton continued to steal possession in a number of promising positions throughout the first half, but they ended it without a shot on target. However, immediately after the break, they fired a warning shot at Chelsea. Welbeck was fed down the left of the area, but lifted his shot over the target.

On the hour mark, Brighton found the target twice - and one was the equaliser. It came from a corner, won by Mac Allister as Kepa pushed his effort away at the near post. The midfielder then delivered the set-piece, with Webster completely unmarked and able to emphatically head the ball home.

Jamie Carragher later said of the defender on Twitter: "Adam Webster's passing out from the back, with both feet is better than any other English central defender."

Immediately after the goal, Welbeck made way for Neal Maupay and Brighton kicked into another gear. The substitute striker continued to test the Chelsea defence, while Webster's Lionel Messi-inspired run into the area saw his squared ball easily collected by Kepa

Both sides continued to push for the winner and Tuchel - fresh from his win as best men's coach at the FIFA Best awards on Monday - made his intention clear in the 80th minute when he made a triple substitution, bringing on Mateo Kovacic, Kai Havertz and Timo Werner.

Man of the match: Adam Webster.

But the trio could not inspire Chelsea to victory - Kovacic having the best effort as he lashed an effort wide - as the Blues missed the chance to keep some semblance of pace with Manchester City in first. They remain third on 44 points, one point behind Liverpool who have two games in hand.

Brighton remain in ninth as their recent resurgence continues, and will now have one eye on a potential European push, just three points behind Manchester United in seventh.

Tuchel: Not the moment to be harsh on the team "We have to respect the opponent - it's very tough to play at Brighton. They played it like a cup game and the noise at the end of the whistle was like if we lost the game and it can very easily give you the impression that we lost, but we didn't.

"Other teams will struggle to get points here, and even tougher if you're full strength and not tired. There are some obstacles to overcome here and I refuse to be angry because it's not about the ambition.

"We were a bit lucky to be 1-0 ahead and you can take advantage to score a second one, but we struggled to show the quality. We know the reasons behind it and we demand a lot from us. But it's not the moment to be too harsh on the team."

"We played with courage, with quality, intensity, everything you need to do against a top team," he said.

"Sometimes the football gods are with you, sometimes they're not, and you have to accept that but we gave ourselves a chance to win that, absolutely.

"Overall I'm just so happy for the players because they've put everything into the game, great personality, great spirit on the pitch, and it was a fantastic atmosphere."

Analysis: Can Chelsea use tiredness as an excuse?

"It has to be said that Tuchel is not the first manager to have pointed towards a hectic football schedule as a reason for below-par performances or results. Jurgen Klopp has been recently outspoken over the festive scheduling, and has previously asked the Liverpool U23s to stand in for senior fixtures due to fixture congestion.

"And it's true that Chelsea have been busy of late. Tuchel pointed to their schedule being packed since November and he is right - their last extended break was over the November international break. Even then, the majority of Chelsea players would have still been playing for their countries.

"They have played a game roughly every three days since and have also not had any games postponed in the recent spate of Covid cases in the Premier League - their match against Brighton was rearranged due to their appearance at the FIFA Club World Cup.

"Their lethargy certainly showed against Brighton too. The Seagulls surpassed their energy levels across the pitch and matched them for attacking stats. Considering the talent at Tuchel's disposal - and the price tags they come with - it's a concern that of their 15 shots, only three were on target.

"Some critics may say that despite the schedule, this is a footballers job that they are well paid for. Chelsea will always be challenging in the latter stages of competitions and aiming for titles, with Tuchel having a deep, expensively assembled and incredibly talented squad at his disposal to be able to do so.

"But, all things considered, footballers are not machines and eventually, everyone needs a rest. Chelsea were recently without a plethora of players - Reece James and Ben Chilwell remain out - and have played some while not really fit to do so. With sufficient time to recover, this dangerous risk would not have been needed and again, Chelsea are not the only team to have had to do so this season.

"Their form reflects it too. Only a few months ago, Chelsea were lifting the Champions League trophy - the talent it takes to do so does not just drop away. But even the best players can take a knock to their confidence.

"Chelsea are winless in their last four Premier League outings, including a huge blow to their Premier League title hopes last weekend against Manchester City, so it's easy to see where Tuchel's argument stems from.

"He said that his team will now have two days of rest before they begin preparing for a huge clash against Tottenham this weekend. But there is one thing for sure - Chelsea will need to bring their A game against Spurs because the fans will not let them get away with any less than their best. Here's hoping the upcoming rest helps them rediscover their league form."

Man of the match - Adam Webster

A captain's performance from the centre-back. Not only did he do his job at the back - racking up the most clearances in the Brighton team (6) - he nodded home brilliantly for Brighton's equaliser and had a hand in a few other attacking moments too.

He told BT Sport: "In the first half, we were by far the better team and it was a goal out of nowhere really with a little
deflection.

"It was a bit of a low blow for us, because we were the better team, but we stuck in there as we have done all season.

"We have gone behind quite a lot of times and have always shown a lot of character to come back and get something from the game."

Opta stats - Brighton on the up as Chelsea falter again

Brighton are back in action on Sunday when they take on Leicester in the Premier League; kick-off 2pm. Chelsea play on the same day and face another huge fixture when they welcome Tottenham to Stamford Bridge, live on Sky Sports; kick-off 4.30pm.