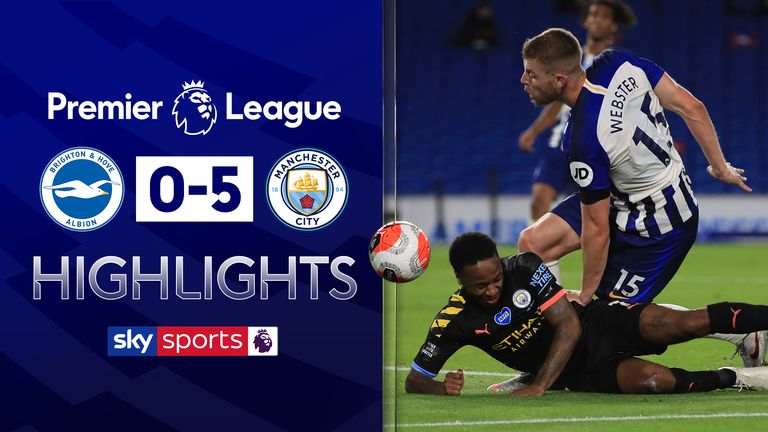 FREE TO WATCH: Highlights of Manchester City's victory over Brighton in the Premier League

Raheem Sterling is enjoying his best season in front of goal after his hat-trick inspired Manchester City to a 5-0 victory at Brighton.

The England forward got Pep Guardiola's side up and running in the 21st minute, curling an effort beyond the dive of Mat Ryan before Gabriel Jesus added City's second just before half-time (44).

Sterling, who has now netted six goals in his last six Premier League games, then scored two headers - the second in bizarre fashion - either side of Bernardo Silva's tap-in to take his personal goal tally to 27 for the season, his best campaign for goals in his career.

Raheem Sterling has scored 27 goals in all competitions for Manchester City this season - this is his best scoring season in his career.

Since the 2015/16 season when he joined Manchester City, only Harry Kane (9) and Sergio Aguero (7) have scored more Premier League hat-tricks than Raheem Sterling (4).

City, who were following up their 5-0 home win over Newcastle in midweek, have now secured second place in the Premier League to qualify for next season's Champions League ahead of their European ban appeal decision on Monday.

Meanwhile, a disappointing night for Brighton, who can still mathematically be relegated, leaves them eight points above the relegation places with three games left to play this season.

How City eased to victory on the south coast

Manchester City got into top gear pretty quickly and they were ahead in the 21st minute through Sterling.

The England international picked out the bottom-right corner with a curled effort from the edge of the box after the ball was nodded into his path by Jesus following Riyad Mahrez's clipped pass forward.

Jesus then saw an effort hit the crossbar after taking a deflection off Lewis Dunk, but it did not take long for the Brazilian to get on the scoresheet when the visitors doubled their advantage to 2-0 two minutes before the break.

Kevin De Bruyne's outswinging corner was flicked on by Rodri at the near post, which created a simple tap-in for Jesus at the back post for his 20th goal of the season.

City picked up in the second half where they left off in the first and De Bruyne was inches away from making it three when his powerful free-kick rattled the post.

It was three moments later, though, as Sterling claimed his second of the night, heading in an inch-perfect cross from Mahrez from close range.

Brighton had no answer to City's free-flowing football and it was 4-0 minutes later when Bernardo Silva tucked away a simple finish on the rebound after Ryan failed to hold on to the Portugal international's initial effort.

Sterling rounded off City's evening, completing his hat-trick with 10 minutes to go. He latched on to a long ball forward before an attempted defensive header from Adam Webster looped up and struck him on the head before rolling into the net, despite the efforts of Dan Burn on the goaline. Sky Sports' Alan Smith: "He's been great in everything he's done and he's topped it off with those three goals. What a season he's enjoying."

Sterling believes his goals will only mean something if they help Manchester City to more silverware.

While hopes of lifting the league title were ended long ago, City still hope to add Champions League and FA Cup trophies to the Carabao Cup they won in February. And Sterling - whose goals on Saturday saw him pass the 30-mark in all competitions for club and country - hopes to play his part.

"The most important thing to me is the value of these goals, that they add to the team," he told Sky Sports. "At the end of day we're trying to win the FA Cup final and win the Champions League as well, otherwise these goals don't really mean anything."

Brighton boss Graham Potter: "We were well beaten by the better team. The first half we were in it a little bit, at a stretch still. We had a couple of opportunities but not that much.

"Manchester City were very good, they've got some players that can hurt you pretty much everywhere. We're a little bit disappointed with how the second half went, we petered out but, at the same time, within four days we've had Liverpool and Manchester City. It's a big ask but we have to dust ourselves down and focus on the next few matches." 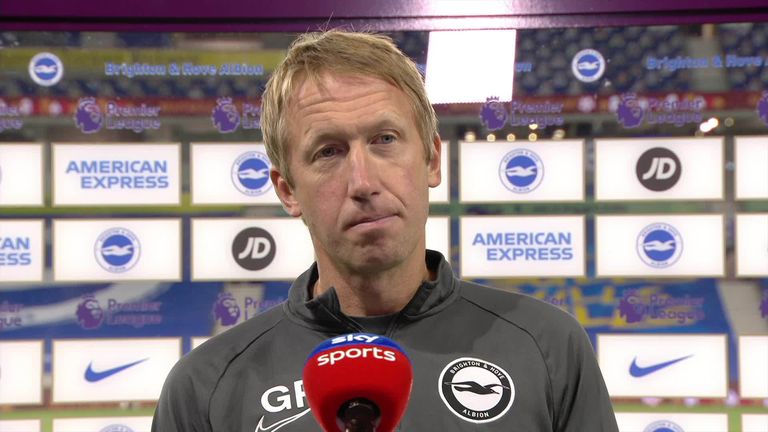 Man City boss Pep Guardiola: "I was pleased with everything tonight - the result and the levels we reached. We are now at a good level and are ready to play the last games of the Premier League and in the Champions League. We've forgotten the Southampton result (1-0 defeat last Sunday) as we played incredibly well there. Football sometimes is strange. We just didn't score there. We're a team who create a lot of chances and today we converted them. Manchester City are back in action on Wednesday when they host relegation-threatened Bournemouth at 6pm, live on Sky Sports Premier League, before Brighton travel to Southampton on Thursday at 8.15pm.