Brighton and Hove Albion vs Portsmouth. Carabao Cup Second Round. 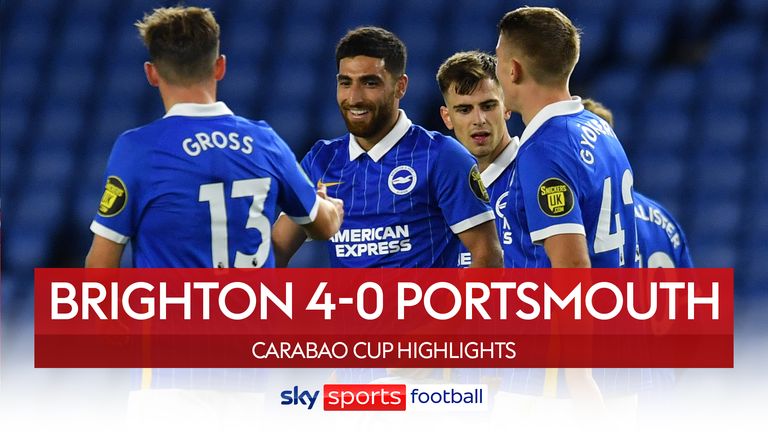 Highlights of the Carabao Cup second round match between Brighton and Portsmouth.

Alexis Mac Allister and Bernardo both netted their first Brighton goals as the Seagulls soared to a 4-0 Carabao Cup second round win over Portsmouth.

Mac Allister nodded in Alireza Jahanbakhsh's cross seven minutes before half-time in an entertaining game at the Amex, where League One Pompey matched their hosts for much of the opening 45 minutes.

Pompey found life tougher going against their south coast neighbours after the break, though, and after Jahanbakhsh rifled in an unstoppable second nine minutes into the second period, the Seagulls began to take flight.

Bernardo, who had earlier missed a glorious chance to open his Brighton account, found the back of the net within moments from a Pascal Gross corner (57), before Viktor Gyokeres put the icing on the cake by turning and firing in past Craig MacGillivray (71) to seal a comprehensive win, and secure the hosts' path through to face Preston in round three.

If Graham Potter had any concerns making 11 changes might result in a disjointed performance from his Brighton side, he need not have worried.

Within eight minutes the Seagulls should have been in front, when Gyokeres' close-range effort was palmed into the path of Bernardo by MacGillivray, but the Brazilian - at this point still on the search for his first goal for the club - blazed over.

Portsmouth gave the hosts a couple of close shaves and were close to bundling home a leveller midway through the first half before an offside flag denied John Marquis, but after that near let-off Brighton went yet closer themselves, as a ropey Sean Raggett backpass saw Gross denied on the line by defensive partner Jack Whatmough, before Dale Stephens, on his 400th career club appearance, struck the base of the post.

Pompey kept giving as good as they got and forced a number of corners from blocked efforts, without testing Jason Steele in the home goal.

And that would prove a problem they would regret seven minutes before the interval, when another poor pass, this time from Marcus Harness, was seized on by Jahanbakhsh, whose cross from the right was hammered past MacGillivray by Mac Allister, for his first goal in Brighton colours.

Moments before the interval Portsmouth were denied in farcical circumstances with Harness close to atoning for his error, only to be denied from 12 yards by the elbow of Joel Veltman, who was already down on the ground clutching his face from a collision moments earlier.

Where the fine margins weren't going Portsmouth's way, they continued to go Brighton's. Nine minutes into the second period Jahanbakhsh found Mac Allister on the half-way line, and after feeding Gyokeres the Iranian was found in space on the left having continued his run. He took a touch onto his right before unleashing a blistering effort inside MacGivilliray's near post, leaving the stunned goalkeeper with no chance.

Within three minutes two became three, as Bernardo made up for his earlier miss with a well-directed near-post header from Gross' corner, as Portsmouth's resistance began to falter.

And they had long-since looked unable to cope with an increasingly confident Brighton by the time Gyokeres got the goal his persistence had deserved, turning and firing home from Bernardo's header back across goal after Jayson Molumby's cross.

There was still time for Portsmouth to get the consolation their overall play would have deserved, and only a stunning stop from Steele denied them late on. From the last of 12 away corners on the night, Raggett got up to turn a corner towards the far post only for the ex-Sunderland goalkeeper to palm it up and away from almost under his own bar.

That left Brighton's copybook unblemished as they secured their biggest win in any competition since beating Norwich 5-0 in October 2016, and looking forward to a trip to Preston next week. 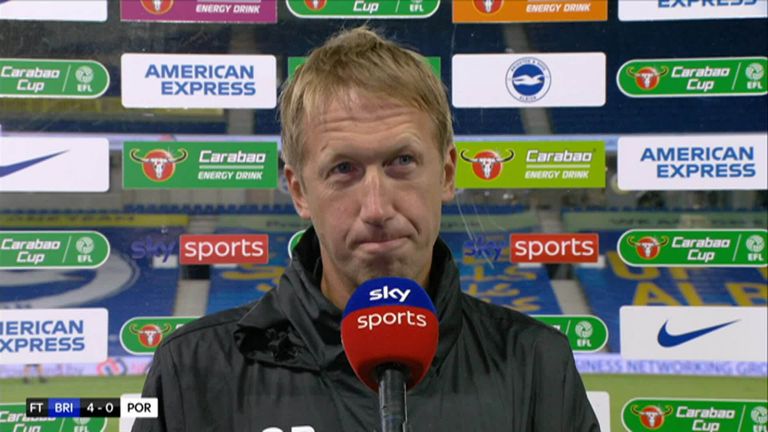 Graham Potter was full of praise for his much changed Brighton side as they ran away comfortable winners against Portsmouth in the Carabao Cup second round.

Brighton boss Graham Potter: "I'm really happy, the application was first-class, we've trained well this week. Ti was a really good attitude in the group, it's nice to score goals, keep a clean sheet and win.

"[Alireza Jahanbakhsh] is getting better and better, pushing all the time, training really well, he's pushing, and you'll see from his performance tonight he's enthusiastic, he's got some quality and he'll play a part for us this season."

Portsmouth manager Kenny Jackett: "It was a tough night, Brighton had a lot of quality and played very well with a good attitude.

"We had into double figures in corners, which is a high number for an away side against a Premier League side. It shows we had our moments, but we couldn't dominate them in their box.

"We showed good spirits and some moments, we got into good positions."

Portsmouth are also in action on Sunday, visiting Rochdale in League One at 3pm.