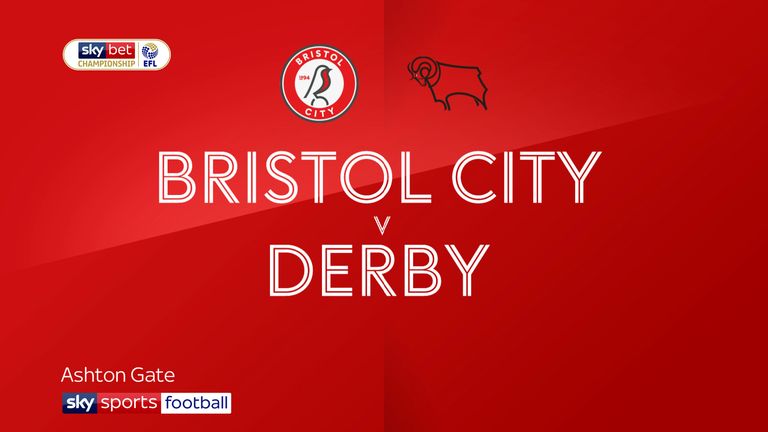 Nahki Wells scored his first goal for Bristol City as they held off a spirited comeback from Derby to claim a thrilling 3-2 Sky Bet Championship victory at Ashton Gate.

The hosts took a 38th-minute lead when Niclas Eliasson's deep cross from the right was volleyed back across goal by Jay Dasilva for Wells to mark his first start for the Robins with a powerful header.

It was 2-0 just before the break as Derby were again found wanting in the air. Famara Diedhiou's header from a right-wing corner was blocked, but centre-back Filip Benkovic pounced to nod home.

The Rams did not learn their lesson and Ashley Williams headed down another Eliasson cross for Diedhiou to volley home a third after 58 minutes.

It looked to be all over, but three minutes later Martyn Waghorn dived to head home a Max Lowe cross and spark a spell of intense Derby pressure.

Chris Martin tapped home a low cross from Tom Lawrence in the 82nd minute to set up a frantic finish in which Lawrence had a deflected shot saved by City goalkeeper Dan Bentley.

Diedhiou and substitute Andreas Weimann missed great stoppage-time chances to make it 4-2 at the death, but the final whistle was greeted with cheers of relief from home supporters.

The first half had been a closely-fought affair until Wells' opener. Waghorn, who picked up an early yellow card for a late challenge, fired wide from distance for Derby after three minutes.

Wayne Rooney was applauded by a section of City fans and baited by others as he attempted to pull the strings for the visitors from a deep midfield role.

His efforts gave Derby the edge and Duane Holmes forced a save from Bentley at his near post with a 17th-minute drive.

Benkovic headed over from an Eliasson corner and debutant midfielder Markus Henriksen fired wide from 25 yards as City applied pressure for the first time.

After Wells had broken the deadlock, Lee Johnson's team produced their best football and Diedhiou brought a smart save from Ben Hamer with a deflected shot.

The second goal came with City well on top, but the final action of the half saw Rooney shoot wide from the edge of the box.

If the home side thought they were home and dry when Diedhiou made it 3-0, they were in for a rude awakening as Waghorn's riposte spurred his side into their best spell.

There was a loud appeal for a penalty when Williams appeared to block a cross with an arm.

At the other end, Wells shot high over the crossbar from an excellent chance and it was end-to-end action as both teams committed to attack.

Having lost four of their previous six home league games, it was a huge result for City in their challenge for the play-offs.

Bristol City's Lee Johnson: "Goalscorers win you games and we have brought Nahki Wells in to do just that. I have had some really good strikers here during my time in charge, but in terms of cold, calculating finishing he is the best.

"It wouldn't be us if we didn't give our fans a scare. I think we could have managed the game better in the closing stages, but overall I am delighted with the result and the way our supporters stuck with the team when we were under pressure at the end."

Derby's Phillip Cocu: "We controlled the game for long periods and lost because of set-pieces. We have to be better at marking and stopping crosses. I thought in every other respect we played a very good game. To come back from three goals down is never easy, but we almost did it.

"The result will not affect confidence because we have been on a good run and produced another very good performance. But defending set-pieces is something we have to work on if we are to get the points we deserve. Bristol are very good at getting crosses into the box, but we have to be stronger."