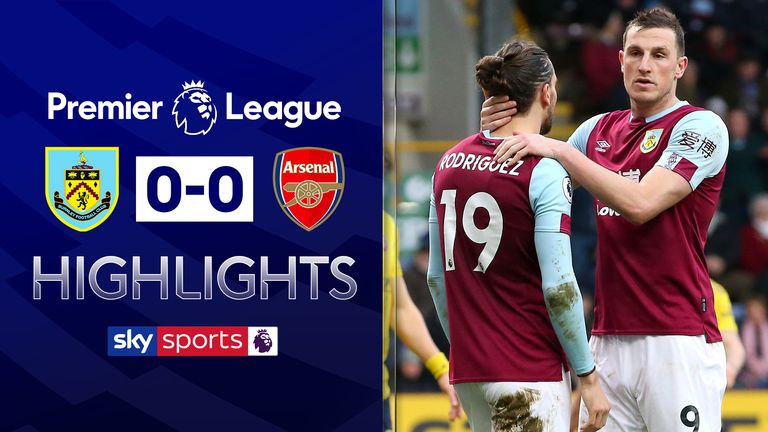 FREE TO WATCH: Highlights from Burnley's draw against Arsenal

Arsenal recorded a fourth consecutive Premier League draw as they were held 0-0 in an entertaining stalemate with Burnley at Turf Moor.

Mikel Arteta's side were profligate in front of goal in the opening exchanges as both Alexandre Lacazette and Pierre-Emerick Aubameyang missed good chances, but they were fortunate to avoid defeat late on as Jay Rodriguez struck the crossbar from point-blank range.

Arsenal move back into the top half of the table in 10th but are still 10 points off the Champions League places after extending their current barren run to one win in their last nine Premier League games. Remarkably, they have now drawn 13 league games - the most after 25 games in the competition's history.

Burnley drew a Premier League match at home a year to the day since their last - 1-1 against Southampton - and the result moves them up to 11th, above Newcastle and Southampton on goal difference.

Man of the match: Dwight McNeil.

How Arsenal were frustrated on the road again

Fresh from engineering Burnley's first win at Old Trafford in their last league outing, Sean Dyche sought to plot a path for a first Premier League victory against an Arsenal side who had won just six league games all season.

It was the visitors, however, who had two glorious openings inside the first 15 minutes but two players typically ruthless in front of goal were very wasteful. First, inside just two minutes, Aubameyang, on his return to the side, crossed for the unmarked Lacazette to head a yard wide from close range.

Aubameyang was then played onside by Charlie Taylor as he was found clean through on goal by David Luiz's measured long pass, but Arsenal's 16-goal top scorer showed signs of rustiness following his return from a three-game ban, slashing his right-foot shot horribly wide.

It was far too close a shave for Burnley manager Dyche, and his side duly sparked into life in direct fashion as Bernd Leno produced a fine save to deny Rodriguez from distance following Chris Wood's knockdown into his path.

Burnley's aggressive approach to regaining the ball high up the pitch contributed in them swinging the balance, but not before Nick Pope stood tall to deny Aubameyang's lofted finish from Granit Xhaka's pass - Arsenal's first shot on target at 37 minutes.

The visitors subsequently lost their way as an attacking force. Dwight McNeil's rasping drive from the edge of the box was well saved by Leno after Matteo Guendouzi was sloppy in possession, and it was McNeil's cross that was then stabbed wide by Jeff Hendrick in the hosts' best opening.

Arsenal's frustration was growing when Mesut Ozil, on his 250th Arsenal appearance, was booked for dissent by Chris Kavanagh, and Arteta will have been pleased to have heard the half-time whistle. Arteta was forced into a reshape at the break as the injured Bukayo Saka was replaced by Lucas Torreira, but it was Burnley who continued to look more menacing.

Ben Mee appeared to get in James Tarkowski's way as he headed over Ashley Westwood's inviting free-kick, albeit replays showing the centre-back may have been ruled offside had he scored.

Burnley were unchanged from the side that beat Manchester United in their last Premier League game, meaning Jay Rodriguez kept his place in the absence of Ashley Barnes.

Mesut Ozil started at Turf Moor for the first time since 2016 while Pierre-Emerick Aubameyang was straight back into the side following suspension. Nicolas Pepe dropped out to make way.

Arsenal were clinging on as Burnley's aerial bombardment continued, with Rodriguez getting too much on his glanced header at the near post from another Westwood set-piece, before Hendrick was guilty of missing an even better chance as he headed McNeil's cross wide from six yards out.

Arteta had seen enough, hooking the ineffectual Ozil on his first appearance at Turf Moor since 2016, introducing Joe Willock in a bid to stem the flow of Burnley pressure.

It looked to have worked when Aubameyang was presented with another glorious opening from Lacazette's cross inside the final quarter of an hour, but he was once again unable to add to his seven goals against the Clarets, glancing his header inches wide.

Having so nearly secured a first away league win of the Arteta era at the third attempt, Arsenal were very fortunate not to suffer a seventh league defeat with 12 minutes remaining.

Rodriguez met McNeil's header back across goal only to fire his shot against the underside of the bar, and with goal-line technology confirming the ball had not crossed the line, both sides had to settle for a point.

"I was hoping really (the ball had crossed the line)," Rodriguez told Sky Sports afterwards. "Any chance I should put it away, it should hit the back of the net. That's what I'm really disappointed with. We will keep going and keep working hard.

"I think a point maybe is a good point in the end but maybe we should have got three."

Burnley boss Sean Dyche: "I don't think we dominated it but we had a good grasp of the game and asked enough questions to score a goal. They often create chances but I felt we kept them down and the balance of the side was very good today.

"I felt we deserved a goal, both in and out of possession we delivered very well today. We play against some very good technical sides, and if you can't find a way to win, you get a point. It's not a grand statement, but it's another solid show of us looking to improve." 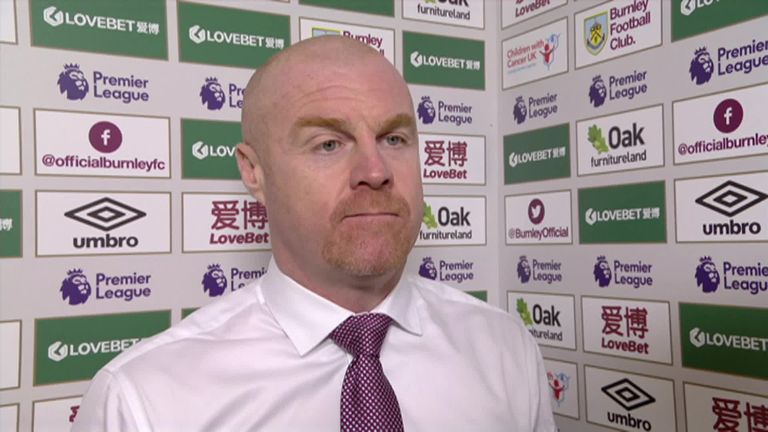 Arsenal boss Mikel Arteta: "I was pleased with the first 15 minutes, the way we controlled the game and the opportunities we generated. After 25 minutes, we started to give some sloppy passes away and we began to concede throw-ins and corners.

"Here, that is a sequence that is very difficult to get out of. We were in big trouble, but we reacted after that in the final 20 minutes. If you don't win your duels you have to win the second ball.

"You have to defend your box and I felt the players did this well despite the chances we conceded. It's a big strength of them the balls they play into the box. We are far from where I want to be but this is all part of the process." 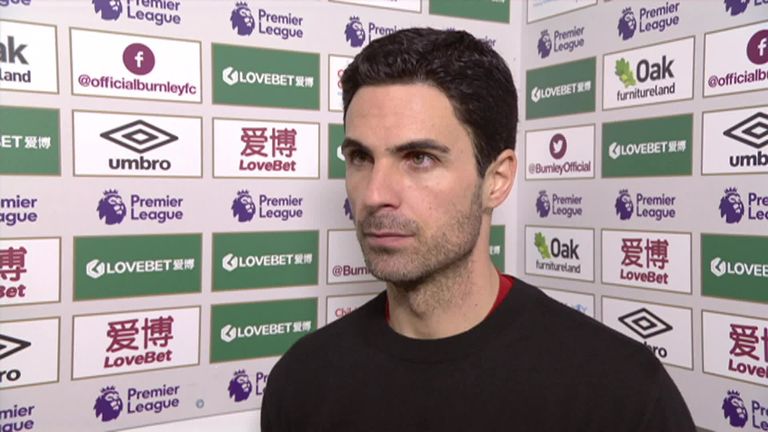 Man of the match - Dwight McNeil

McNeil created five chances and had three shots for his side, while he also won possession on 10 occasions during an impressive display.

Sky Sports co-commentator Andy Hinchcliffe said: "Burnley do favour playing down their left-hand side and McNeil has been a constant thorn in the Arsenal side, getting balls into the box."

McNeil is the youngest player in the Premier League to start every match so far this season.

He told Sky Sports: "It was our game plan to get after them and I felt we played really well today."

The draw specialists in numbers

Burnley now have their two-week winter break before travelling to face Southampton on Saturday, February 15; kick-off is at 12.30pm.

Arsenal also embark on a fortnight's pause before returning to Premier League action at home to Newcastle on Sunday February 16, live on Sky Sports.