Match report and free highlights as Lucas Moura steps off the bench to score the decisive goal as Tottenham knock Burnley out of the Carabao Cup and book their spot in the last eight. Watch the draw on Soccer AM on Saturday from 10.30am. 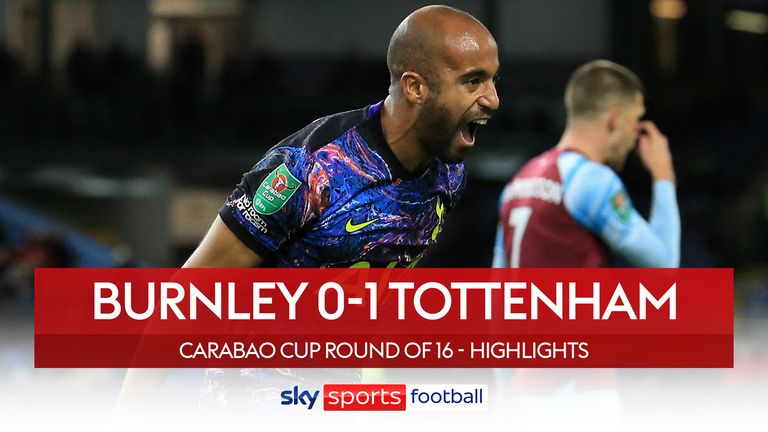 Highlights of the Carabao Cup Fourth Round match between Burnley and Tottenham.

Lucas Moura headed Tottenham into the quarter-finals of the Carabao Cup in an attritional, hard-fought 1-0 win over Burnley at Turf Moor.

Spurs had failed to have a shot in the second half of their defeat to West Ham in the Premier League on Sunday and it took them until the 65th minute to work Nick Pope in this tie, with the goalkeeper producing a stunning stop to deny Giovani Lo Celso from a one-on-one.

But sub Moura, who had replaced the injured Bryan Gil on 25 minutes, found a way past Pope with a forceful header (68) to give Nuno's side a much-needed boost.

Burnley failed to record a shot on target themselves until the 85th minute but should have had a penalty when Davinson Sanchez hauled Nathan Collins to the floor from a first-half corner. However, with referee Peter Bankes waving away the appeals and no VAR in operation, Spurs were able to capitalise on their good fortune.

There was a late charge from the hosts but Spurs survived the aerial bombardment and they will now be in the draw for the Carabao Cup last eight, which takes place live on Sky Sports' Soccer AM this Saturday from 10.30am.

Both sides made six changes for this cup tie and both took a long time to get going, with a Harry Kane strike wide of the far post from Lo Celso's pass the only real chance in the opening stages, before Burnley's penalty appeals when Sanchez rugby tackled Collins in the box were dismissed by referee Bankes.

Gil's muscle injury saw the early introduction of Moura, who won a free-kick in a dangerous position soon after, but Lo Celso wastefully fired straight into the Burnley wall.

The Brazilian had injected some drive into the visitors' play but drew the frustrations of Kane when he saw a pass for Bergwijn blocked when the striker was better placed. However, Kane - captain on the night in the absence of Hugo Lloris - only had himself to blame when he sent a scissor kick from a corner well over the bar just before the end of a dull first half.

Spurs started brightly in the second half, with a Lo Celso pass just out of Kane's reach in the box, and Bergwijn having a shot blocked by debutant Connor Roberts, but with the scores still level at the hour mark, Sean Dyche turned to his frontline strikers, sending on Chris Wood and Ashley Barnes.

It was Burnley 'keeper Pope who had the home fans on their feet though, producing a brilliant save to deny Lo Celso from a one-on-one chance after Kane had split the defence. But he was picking the ball out of his net moments later.

Emerson Royal's cross from the right appeared to take a slight deflection off Erik Pieters but it made its way through to Moura, who powered a header into the ground and beyond Pope from 12 yards out.

Pope was sharp again to keep out a Moura drive from the edge of the box as Spurs pushed for a second but in the final stages it was Burnley on the front foot, sending a series of crosses into the visitors' box.

However, despite finally working Pierluigi Gollini with five minutes to play through Ashley Barnes, Sean Dyche's side couldn't carve out a genuine opening and Spurs celebrated their progress to the next round at the sound of the full-time whistle.

Burnley boss Sean Dyche: "It's a frustrating one yet again. It was a good performance, I thought. We can't get the rub of the green at the minute. Erik defends it, it slides off his head straight onto their head and straight in the middle of the goal.

"Nick Pope is right back on his game, two really good saves. Good energy to the performance. The crowd were terrific and we need that because we're going through a tricky spell. But how do you find that win? That's our next challenge. We're so close to getting it right."

Tottenham boss Nuno Espirito Santo: "It was tough, as we expected, but I thought we played a good game. We were in control of the game, we had good possession, we created chances. First half we should have done better with our movement because we did it in the second half. It was a deserved win.

"We saw some combinations. There's a lot more, to be more accurate with the passing, because we have the quality to do it. We are happy to go through. We did our job. And I think we did it in a very nice way, with good football."

What's next for Burnley and Tottenham?

Burnley host Brentford in the Premier League on Saturday at 3pm while Tottenham are at home to Manchester United live on Sky Sports Premier League and Main Event on Saturday Night Football; coverage starts at 5pm with kick-off at 5.30pm.