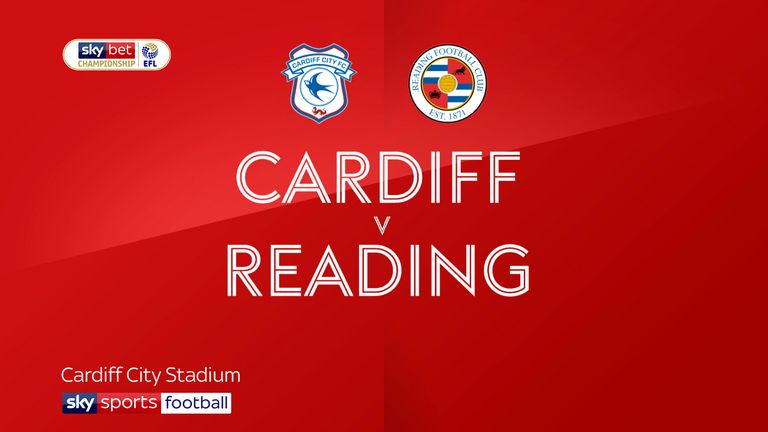 Highlights of the Sky Bet Championship match between Cardiff and Reading.

Callum Paterson salvaged a 1-1 draw for Cardiff in their Sky Bet Championship clash with Reading on Friday, which was marred by off-field incidents.

Yakou Meite scored his second goal in a week against the Bluebirds before a Reading fan was ejected from the ground as tensions spilled over.

Paterson levelled from close range with 20 minutes remaining, which sparked a one-man pitch invasion and led to another supporter being removed from the stadium.

The result leaves Cardiff four points off the play-off places, while Reading consolidated their mid-table standing.

Cardiff manager Neil Harris brought Lee Tomlin back into the starting XI in place of Robert Glatzel after his match-winning free-kick knocked West Brom off the top of the Championship on Tuesday night.

Forward pair Sam Baldock and Meite were back in the Reading side, while Tom McIntyre returned from suspension to start in a five-man defensive unit.

It took only nine minutes for Meite to put the visitors in front.

The midfielder surged into the box and clipped an inch-perfect cross onto the head of Meite, who powered the ball down into the ground past Alex Smithies.

Tomlin almost delivered an immediate response but failed to keep his curling shot down after latching on to Sean Morrison's lay-off.

Harris introduced Danny Ward and Leandro Bacuna in place of Gavin Whyte and Junior Hoilett at half-time after his side failed to get a shot on target during the opening period.

Ward wasted his opportunity to make a difference after 64 minutes. Tomlin played a lofted ball in behind the defence to the substitute, but the striker barely made contact with the ball as he attempted a volley from six yards out.

But the Bluebirds hauled themselves level after 70 minutes following a mix-up in the Reading defence.

Will Vaulks launched a long throw into the area which Royals defender Michael Morrison could only head onto his own post, and Paterson reacted quickly to score for the third game running and make it 1-1.

Omar Richards entered the action in the 87th minute and almost made an instant impact as his cross-cum-shot dipped over Smithies and onto the roof of the net.

Both sides ventured forward in search of a winner after five minutes added time were indicated, but Baldock could not hit the target after being played in by Ejaria as they settled for a point.

Cardiff's Neil Harris: "I heard a raised level of noise, I didn't see what went on with the stewards.

"I can't comment because I'm not aware of what went on. At the time I was thinking about getting my team back into the game, I'm not sitting on the fence."

Reading's Mark Bowen: "It was a feisty affair, but the referee handled it well in my opinion.There were one or two running battles on the pitch, familiarity breeds contempt.

"But like good professionals they came off the pitch and shook hands and said 'see you on Tuesday'."