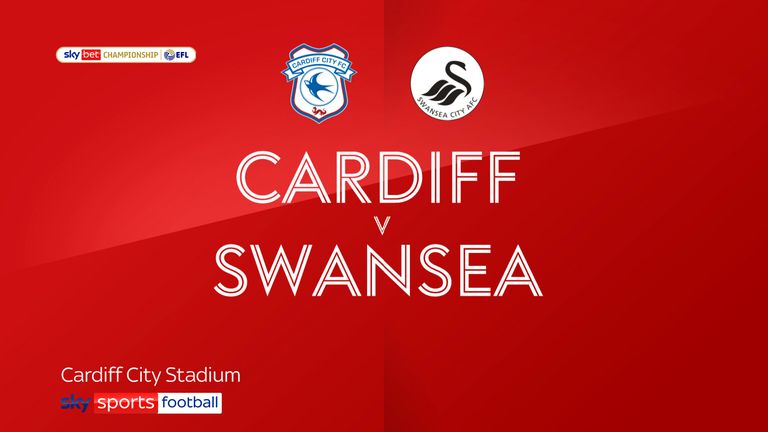 Jamal Lowe scored twice as Swansea continued their South Wales derby dominance with a 2-0 win over Cardiff at the Cardiff City Stadium.

Without a goal since October 24, the former Portsmouth and Wigan forward gave Swansea the lead early on when his tame effort beat Cardiff goalkeeper Alex Smithies (6).

Bluebirds midfielder Joe Ralls was sent off for a second bookable offence (67) before Lowe compounded a miserable afternoon for the hosts when he added a brilliant second after a fast break (72).

Cardiff's four-match winning streak comes to a close as a result, while Swansea sit third, behind Norwich and Bournemouth.

With two wins and three clean sheets from the last three meetings, Swansea would have been confident going into the game and after heading straight for the final third in the opening minutes, they were quickly rewarded.

A hopeful cross from Jake Bidwell was cushioned into the path of Lowe by Connor Roberts, allowing the forward to hit a tame shot that escaped the grasp of Smithies and trickled over the line.

They might have been further ahead shortly after were it not for Smithies, who redeemed himself by pushing Matt Grimes' wicked effort onto the left-hand post after a short corner routine from the visitors.

It was a surprise to see Cardiff looking subdued after a run of four straight wins and to intensify their frustrations, top scorer Kieffer Moore limped off with just under an hour gone, moments after he fashioned a clever backheeled effort over the crossbar.

Things soon went from bad to worse as Ralls was dismissed for a second bookable offence. Following Swansea pressure, he lost control of the ball and lunged in on Korey Smith as he tried to regain it, making referee John Brooks' decision a simple one.

Swansea took full advantage of their advantage in personnel as, five minutes later, Lowe added his second of the afternoon with a cool, calm finish with the outside of his right boot after a mazy run through the middle of the park to make sure of a comfortable derby victory.

Man of the match - Jamal Lowe

"I thought he was outstanding in his overall performance. He was a constant thorn in the side for Cardiff all afternoon." 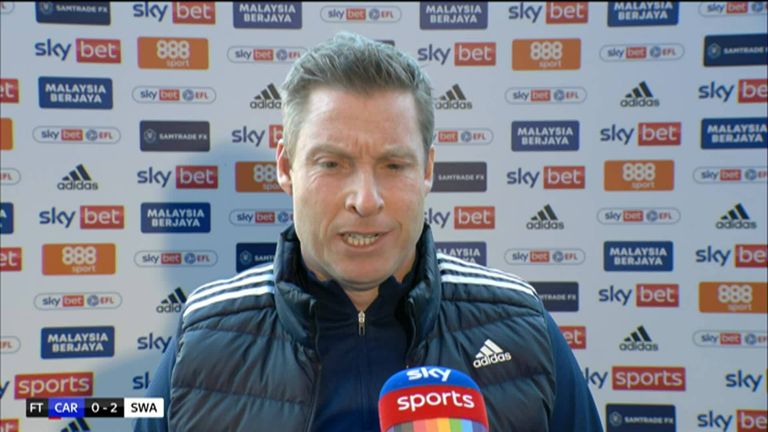 Neil Harris conceded that Swansea were the better team as they beat Cardiff 2-0 in the South Wales derby.

Cardiff's Neil Harris: "We weren't good enough, we didn't cause enough problems for Swansea. My record as a player and manager in derbies is extremely good and I hate this feeling. I am gutted for the fan base that need some cheer at the minute and we've not given it to them.

"So a huge apology to our Bluebirds at the moment." 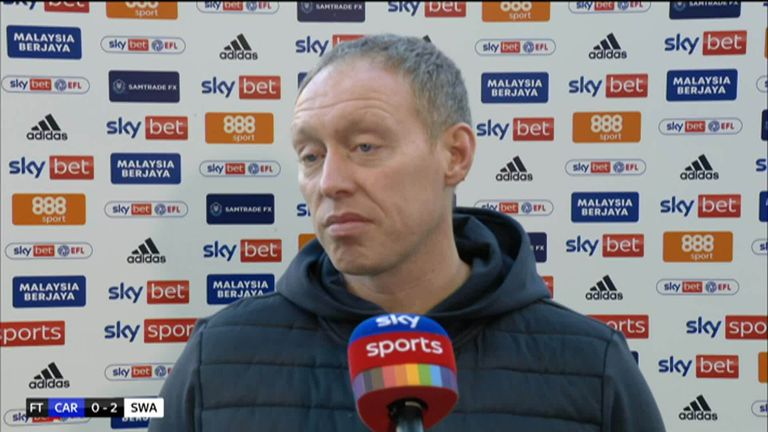 Swansea's Steve Cooper: "We focused on two things: how important the game is because it's a massive deal down here and playing the game. We weren't far off our best and we picked a good day to be like that. The performance was right up there because there was so much importance on the game.

"The result is the most important thing, but to think we've done it in the way we've done it is what I want us to be. That's why I wanted to get everybody together on the pitch at the end of the game, to show the togetherness in the group while knowing it's for the supporters as well."