Chelsea vs Malmo FF. UEFA Europa League Round of 32.

Chelsea will take a 2-1 advantage into their Europa League last 32 second-leg tie with Malmo on Thursday (kick-off 8pm) as they look to progress to the next round.

Ross Barkley and Olivier Giroud scored the two away goals in Sweden last Thursday to see the Blues in front for the return tie at Stamford Bridge this week.

It is a huge few days for Chelsea too, with a Carabao Cup final against Manchester City to come on Sunday, live on Sky Sports, but Maurizio Sarri insists he is only focused on the Malmo game.

He said: "It's not very easy because we have no time. I think Sunday is too far. We need to think to this match. This match is a chance to qualify and so we have to think only of this. 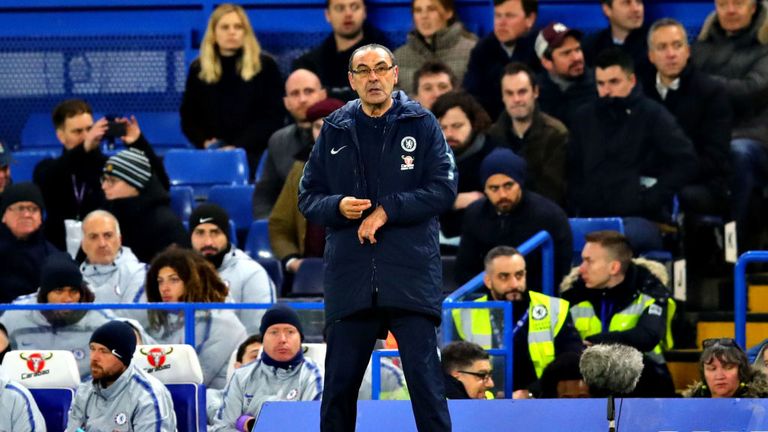 "Then starting from after the Europa League match we can start to think of the other match. Now we need to be focused because the match is not easy."

Malmo boss Uwe Rosler has sympathy for Maurizio Sarri's predicament as Chelsea head coach, but is confident the Swedes can add to the Italian's woes in Thursday's Europa League last-32 second leg.

"He has to live with the pressure, like we all do. Not tomorrow, but in general, I wish he comes through this difficult period and will continue," he said.

"The goal made the game really interesting for us. I know we need to score, but we can. So, see what happens."

Goalkeeper Kepa Arrizabalaga is a doubt with a hamstring injury with Davide Zappacosta and Pedro (both illness) are doubts, with Chelsea holding a 2-1 first-leg advantage.

Willy Caballero is set to start in goal, with under-pressure Sarri likely to make changes as he balances progression in Europe with preparations for Sunday's Carabao Cup final.

Malmo have no new injury problems and are likely to field the same line-up from last week's game. Arnor Ingvi Traustason is expected to fly to London later than the rest of the squad after the birth of his daughter.

Chelsea have won each of their last six Europa League home games, scoring at least three goals in five of those games (17 in total - 2.8 per game on average).

Swedish sides have won just once in their last seven European encounters away to English teams - winning their most recent such game (Ostersunds' 2-1 win against Arsenal in last season's Europa League).

Willian has created 22 goal-scoring chances for Chelsea in the 2018-19 Europa League, scoring two and assisting three goals; no other Chelsea player has both scored and assisted more than once.

Of the remaining 32 teams in the 2018-19 UEFA Europa League, Malmo have had the oldest starting XI on average in this season's tournament (29y 353d).

Who are Chelsea going to play considering they have the Carabao Cup final on Sunday? It's a must-win game for Chelsea to build some confidence ahead of the final. I imagine Maurizio Sarri will give some players a chance like Ruben Loftus-Cheek and Olivier Giroud, but for Sarri at the moment it's just about survival, getting to the weekend and then seeing where it takes him.

Sarri has been around and knows his time is probably up, so he will pick a team that will get them through this game, which I don't think will be overly difficult, but then he has to have a thought process that says 'I have never won anything other than a promotion, so I could actually get sacked by Chelsea and still win the Carabao Cup'. That's what he has to think. Everything is about Sunday.

Even if Zinedine Zidane was interested I don't think he will touch this club until they are out of most competitions, that's the only time he will want to start, and whoever suggested that Arsene Wenger would be a good manager for Chelsea needs a good turning of their ponytail!