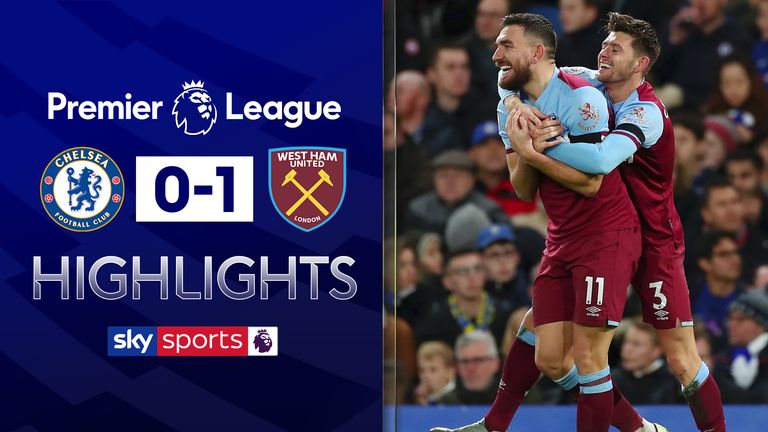 FREE TO WATCH: Aaron Cresswell sinks Chelsea at the Bridge

West Ham ended a 17-year wait for a Premier League victory at Stamford Bridge as Aaron Cresswell's strike saw them beat Chelsea 1-0 to ease the pressure on manager Manuel Pellegrini.

Cresswell scored the decisive goal three minutes into the second half, curling a low right-footed shot beyond Kepa Arrizabalaga, and the Hammers' victory would have been more secure had Michail Antonio not had a second ruled out by VAR.

Chelsea registered 19 shots on goal but, with Tammy Abraham out injured, the Blues lacked the clinical edge as they slipped to back-to-back league defeats under Frank Lampard for the first time.

West Ham's first victory away at Chelsea since 2002 ends an alarming eight-game winless run and sees them climb up to 13th in the table.

Man of the Match: David Martin.

Winless in their last seven meetings with Chelsea and without a win at Stamford Bridge since 2002, the odds were stacked against West Ham getting a result to ease the pressure on under-fire manager Pellegrini. And those odds would have increased significantly had Chelsea converted one of a host of early chances.

Pedro saw a goal-bound effort blocked inside three minutes and, after Antonio blazed over from Cresswell's cross, Mason Mount drew David Martin into his first save in the Premier League before Christian Pulisic sent a free header over the Hammers' bar.

The woodwork came to West Ham's rescue on 22 minutes to prevent a deflected Reece James cross from handing Chelsea an inadvertent lead, while Kepa bailed the Blues out with a stunning save at point-blank range to stop Antonio heading in from Robert Snodgrass' sumptuous cross.

West Ham grew in confidence and stature from there on, but Chelsea still posed a threat. A triple save from Martin thwarted Mateo Kovacic, Giroud and Pedro in quick succession before Pulisic missed a glorious chance to send the hosts into the break ahead when he fired wide from James' cross in stoppage-time.

And, three minutes into the second half, the hosts were made to pay for their profligacy. Pablo Fornals released Cresswell into space in the area, he checked inside James and produced an assured finish into the bottom right-hand corner.

West Ham looked to have doubled their lead on 67 minutes when Antonio bundled Snodgrass' cross in at the back post, but the forward was adjudged to have handled the ball and the effort was chalked off.

That left Chelsea with 20 minutes to throw everything at their London rivals in search of an equaliser, but it did not materialise as a resolute defensive display saw the Hammers home and left goalkeeper Martin with a clean sheet and in tears after his winning debut.

Man of the match - David Martin

A Premier League debut, a clean sheet and a vital win. It really was the perfect afternoon for the 33-year-old goalkeeper. In truth, he didn't have too much to do across the 90 minutes but when called into action he was assured and denied the home side, underlining his position as the safest pair of hands currently at West Ham's disposal. David Martin couldn't hold back the tears as he kept a clean sheet on his Premier League for West Ham in their victory over Chelsea at Stamford Bridge.

West Ham goalkeeper David Martin told Sky Sports: "It doesn't feel real. I'm 33 now so I've had a decent career and played a lot of games, but it can't prepare you coming into this.

"I've been struggling to eat for a couple of days and Cress (Aaron Cresswell) was laughing at me before the game because I couldn't finish my food - they had to take my plate away! But I enjoyed it and I'll enjoy it even more now." 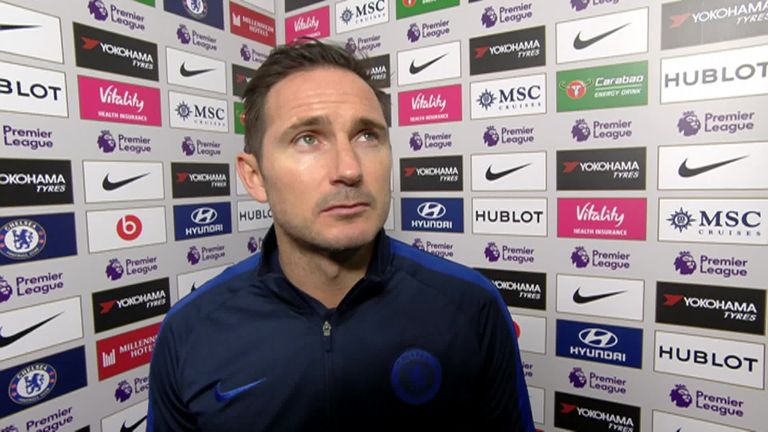 Chelsea boss Frank Lampard: "This is a reality check for everyone; me, the players, the fans. We have all been pretty happy with a lot of things so far but today is a reminder of the harsh realities of the Premier League and the realities of where we are at.

"We have to work and improve because we were not good enough. I haven't had to say that this season for an entire game. We created chances but we didn't push on. West Ham were hungry, and they beat us with determination and by digging in." 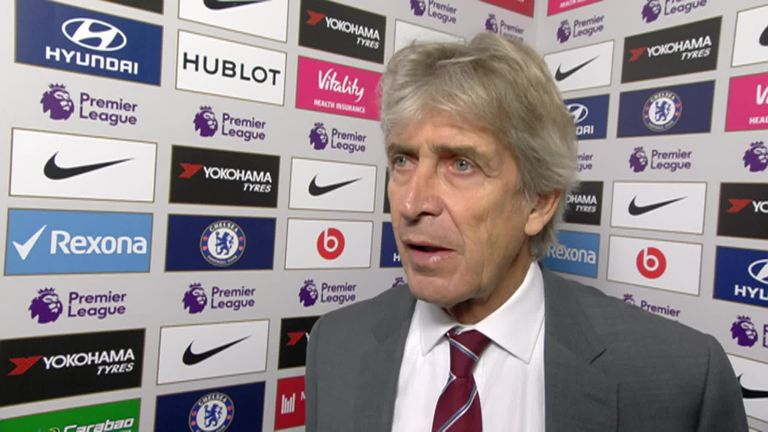 Manuel Pellegrini praised his goalkeeper David Martin after keeping a clean sheet on his Premier League debut in West Ham's 1-0 win at Chelsea.

West Ham boss Manuel Pellegrini: "The key was not to concede easy goals, it's impossible to win when you do that. We were consistent and concentrated. From the beginning the players were absolutely sure of the way we had to play. We tried to win the game from the first whistle, we played with high intensity, pressed high and created chances and options and every player did their duty."

Chelsea host Aston Villa and West Ham travel to Wolves in the Premier League on Wednesday at 7.30pm.