With his side searching for a goal against the holders to earn them top spot in the group, Suarez raced into the box and rounded Chile's Gabriel Arias, only for the 'keeper to punch the striker's shot away for a corner.

But Suarez seemed to momentarily forget that Arias' job is to stop shots with his hands and appealed for a penalty, gesticulating to the referee by pointing to his own hand.

Edinson Cavani's 82nd-minute goal moved Uruguay on to seven points and above Chile, who qualified second with six and will play Colombia on Friday.

Cavani's header beat Chile goalkeeper Gabriel Arias with most of the 58,000 fans at the Maracana Stadium in Rio de Janeiro beginning to expect a goalless result.

On this same day four years ago, Gonzalo Jara was responsible for an incident with Cavani that ended in the striker being sent off in the quarter-finals of the 2015 Copa America in Chile.

On Monday, though, Jara's only effort that was noticeable was kicking a pitch invader when the match was 0-0.

Chile dominated ball possession through the match, but Uruguay improved after midfielder Nicolas Lodeiro was substituted by Nahitan Nandez after the break.

Ecuador coach hits back after exit

Ecuador coach Hernan Gomez said he does not think he is "the problem" despite his side's early exit at the Copa America on Monday.

Ecuador had to beat Japan to qualify for the quarter-finals but a 1-1 draw in Belo Horizonte saw them both eliminated. The Ecuadorians finished bottom of Group C, with Uruguay and Chile going through to the knockout stage.

Ecuador have now gone seven games without a win but Gomez will not step down.

"None of the officials hired me saying what happens to me depends on what I do in the Copa America," he told reporters. 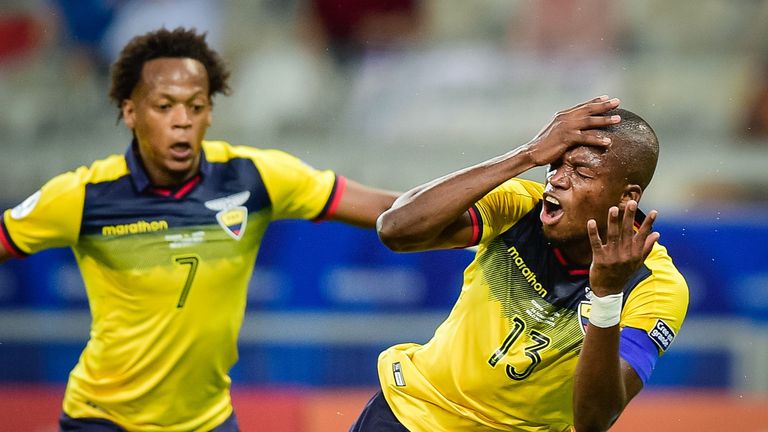 Ecuador and Japan were eliminated from the Copa America after a 1-1 draw on Monday, giving Paraguay a spot in the quarter-finals of the competition

"Because if they had then I wouldn't have taken the job. I'm not handing over my post. If they want to fire them, then fire me.

"Another coach will come in and the same things will happen, they are asking for results when we cant provide them. Lets see who explodes first. I don't think I am the problem."

Colombian Gomez took Ecuador to their first World Cup finals in 2002 during his first spell in charge. He returned to the post last year after Ecuador fell apart following a brilliant start to the South American qualifiers for Russia 2018.

Four wins in their first four games were followed by just two more in their next 14, leaving them well outside the qualification places and costing Patricio Lara his job.

Gomez won four of his first six games in charge but they have toiled since.