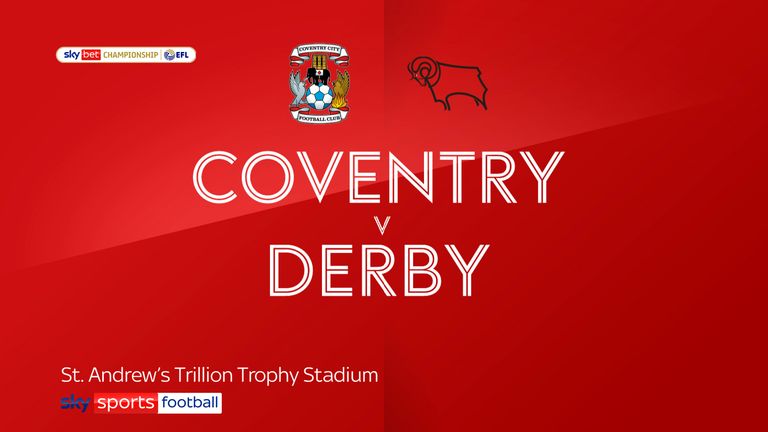 Highlights of the Sky Bet Championship game between Coventry and Derby

Derby were sucked back into the Championship relegation dogfight as they suffered a 1-0 defeat at fellow strugglers Coventry.

Derby boss Wayne Rooney had shuffled his pack with six changes from the side which suffered a 4-0 drubbing at Cardiff in midweek.

But the Rams, who earlier announced that they would be stopping taking a knee before kick-off, were left reeling as Max Biamou netted for Coventry, a cool finish which ultimately proved the difference between the sides.

It was a vital win for Coventry, who are close to finalising a deal to return to the Ricoh Arena next season.

They moved alongside Derby, six points above the bottom three.

Arguably, the visitors did not do enough to take anything from the game, struggling to create clear-cut chances while the Sky Blues looked the more dangerous.

Coventry, who had made two changes from the 2-1 home defeat to Middlesbrough in midweek, got off to a fine start.

Gustavo Hamer saw a free-kick saved after 10 minutes and shortly after Biamou capitalised on a misplaced Nathan Byrne pass before racing forward and slotting home.

The home side, with their tails up, went close to a second as Callum O'Hare released Fankaty Dabo on a marauding run down the right and his cross-shot was agonisingly missed by Biamou.

The visitors nearly had a way back into the game with a double chance in the 25th minute. Patrick Roberts saw a low shot deflected for a corner before Matt Clarke was denied by Ben Wilson.

Clarke saw a far-post header go wide while, at the other end, Leo Ostigard sent an effort over as Coventry went into the break with a slender advantage.

Both sides came out with plenty of endeavour after the break but found it hard to fashion clear chances.

The Rams' seven-goal top scorer Colin Kazim-Richards, who netted in a 1-1 draw against Coventry earlier this season, flashed a header wide.

But it was Coventry who went closest when a fierce drive from Matty James rattled against the post with Kelle Roos beaten.

Biamou could have had his second as he hit a well-struck effort wide after beating the offside trap while substitute Louie Watson blazed off target from distance as the visitors became more desperate.

Coventry's Mark Robins: "We knew there was pressure around the game but you are going to get that and you have to deal with it. I thought we did that brilliantly. We got the clean sheet, first and foremost, which is outstanding. And then I thought the pressure we put on them to force a mistake for the goal was excellent.

"Max Biamou still had a lot to do to get the other side of their defenders but he did it brilliantly and finished really well. It was a settler for us in that first half. Derby County is a big, big club and we are here on the same amount of points as them in the same division. That, in itself, means things are starting to look brighter. If we keep upping the performance levels, I feel the spirit, effort and commitment is there."

Derby's Wayne Rooney: "We gave away a sloppy goal and, after that, didn't look like getting back in the game. We didn't create enough chances, we didn't pass the ball forward enough, we didn't penetrate them enough or get quality balls in the box.

"Our game management has to be better and, overall, the result was a fair one. We have to pick ourselves up. Moving forward, we have to be at our best in terms of energy, game management and bravery. If we are not, we will lose games."