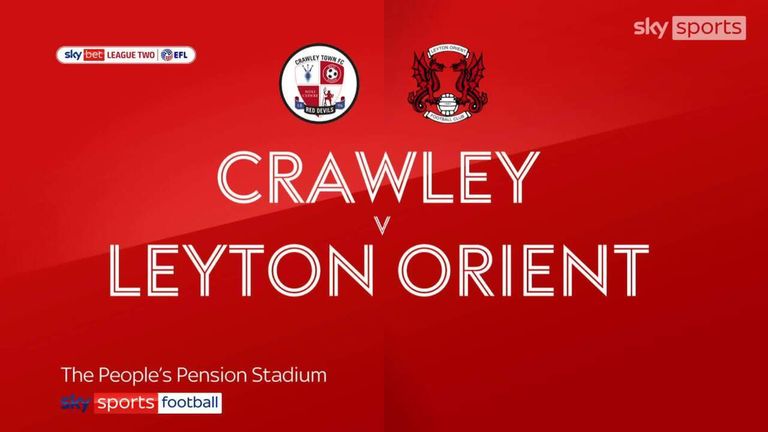 Goals in each half from Theo Archibald and Aaron Drinan gave Leyton Orient their third win in the last four Sky Bet League Two away games with a 2-0 victory at Crawley.

Supporters voiced their support throughout for Yems, 62, and a smoke bomb was thrown onto the pitch in added time.

Orient head coach Richie Wellens admitted complacency played a part in last week's 4-2 home defeat by Northampton and called on his men to raise their game at a time in the season when "it kills you not playing for anything."

His team responded and after only eight minutes a dead ball kick by goalkeeper Lawrence Vigouroux found winger Theo Archibald, who neatly lobbed veteran keeper Glenn Morris for his eighth goal of the season.

A foul by Jordan Tunnicliffe on Paul Smyth gave Drinan a great chance of doubling the lead from the penalty spot in the 18th minute but his weak kick was parried by Morris, who then saved a headed rebound.

After Crawley striker Tom Nichols was denied by Vigouroux, Orient threatened again when the recalled Jordan Brown had a goalbound shot saved by Morris.

The Reds began the second half in a more purposeful manner and midfielder James Tilley put a low shot wide after a corner by skipper George Francomb.

Orient were wasteful when, after Brown fired over, Archibald had an effort cleared off the line by Will Ferry after a mistake by substitute Tony Craig.

Crawley were denied what appeared to be an equaliser in the first minute of stoppage time when a shot from Tilley looked to have crossed the line after coming down from the underside of the bar, but was ruled out by the referee's assistant.

Orient wrapped up victory three minutes later through Drinan, who fired his 16th of the season.