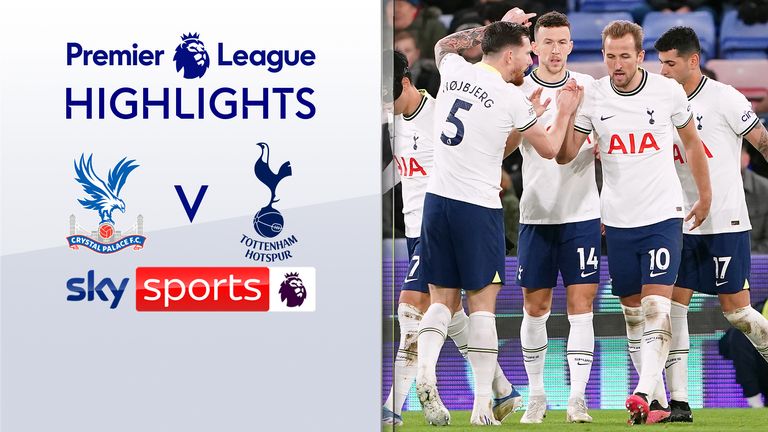 FREE TO WATCH: Highlights from the Premier League match between Crystal Palace and Tottenham Hotspur

To use a sporting cliché, it was a game of two halves for Spurs. Antonio Conte was looking for a reaction from his side after a draw against Brentford and defeat to Aston Villa since the league restarted after the World Cup.

They were run ragged by an impressive Palace in the opening 45 minutes, who themselves were looking to atone for an abysmal 3-0 defeat to Fulham in their last home outing.

But as has often been the story for the Eagles, they failed to take their chances as Tottenham's quality began to shine through in the second half. Kane, on his 300th Premier League appearance, nodded Spurs ahead in the 48th minute.

He swept home his second five minutes later, taking him to within two goals of Jimmy Greaves' all-time scoring record for Tottenham (266).

The pressure had been on Son too as he continued to struggle in front of goal. He thought he had nabbed an assist for Matt Doherty's goal (68), but his cross took a deflection off Nathaniel Clyne on the way through.

The South Korea forward soon broke his eight-game barren run in the 72nd minute, linking up with his strike partner Kane for yet another Spurs goal. It was a fine volley from too, rounding off an excellent evening for Spurs.

"[My goal] was about time!", Son told Sky Sports after the game. "It felt amazing. To be honest I felt really sorry for the team because I think they were expecting more than what I've done.

"I hope today was the turning point, getting back the confidence and I will continue to help the team."

The result takes them to within two points of the Champions League places, although they have played a game more than Manchester United in fourth.

While Crystal Palace's performance was an improvement on the Fulham defeat, they have now lost two successive Premier League games at Selhurst Park, dropping down a place into 12th.

How Spurs eased to victory at Selhurst Park

While Tottenham were the better side in the opening 25 minutes, there were not too many chances to shout about. Wilfried Zaha was unable to meet Michael Olise's right wing cross, before the France U21 international skied his own effort. At the other end, Kane directed his own header past the post.

But Crystal Palace soon began to find a foothold in the game and should have gone into the break ahead. Zaha easily bypassed Oliver Skipp and Bryan Gil before finding Ayew. However, the Ghana forward's shot was well-saved by Hugo Lloris.

Just after the hour, Joachim Andersen was encouraged to shoot by the home fans - and he obliged. After cutting the ball onto his left, he sent a superb, curling effort goalwards, with a last minute swerve seeing it misses the target by inches.

Crystal Palace continued to dominate and Tottenham will have been grateful to have gone in on level terms at the break. The Eagles should have scored 15 seconds after the restart too. Cristian Romero's poor touch from Joel Ward's long ball allowed Ayew to nip through, but Eric Dier was there to block the shot.

But the Eagles were punished for their lack of finishing as Kane scored twice in five minutes. Gil picked out Ivan Perisic on the left, who swept a cross to a waiting Kane at the back post. He then rose above Joel Ward to nod home the opener.

It was then Kane who created the second goal himself, playing a neat give-and-go with Gil down the right wing. Once he received the ball back, it was an easy, slotted finish from the England captain as he closes in on Greaves' record.

Crystal Palace hardly sat back in the aftermath either - Olise curled wide before substitute Jean-Philippe Mateta nodded over - but Tottenham were not done yet as Kane again set-up his team-mates.

He found Son down the right of the area - forced wide by Ward - with his eventual cross taking a deflection off Clyne from close range. However, Doherty still collected the ball and rifled past Vicente Guaita for Tottenham's third.

Player of the match: Harry Kane.

But Son finally made the breakthrough, breaking his worst goalless run since October 2018. Kane looped a ball over the top, finding his team-mate, who had got ahead of Marc Guehi. It was a fine volleyed finish from the forward too, peeling off his mask and throwing it into the area as he celebrated in front of the away fans.

Crystal Palace kept finding openings through - Lloris twice needing to save from Ayew and Zaha - but they were unable to spoil Spurs' party as they took all three points back to north London.

Player of the match - 'Kane performance was a masterclass'

"Graeme said before the game that when you've got a player like Harry Kane you've always got a chance and that came to fruition there.

"He was just incredible, not just his goals, his all-round play. He held it up, brought people into play, his touch was exquisite. It was a masterclass second half and his second goal is as good as it gets.

"The touch and the finish is sublime and we've seen him do it time and time again. Just an incredible player."

"He has not looked at the goal or the goalkeeper [for his second goal] but he knows where the goal is because of the line on the six-yard box. He is a class act, the one English player who is truly world class for me.

"I think they will finish in the top four because they have him. Keep him fit. He is Mr Goals. And you've got a good chance of winning games if you've got him in your team." 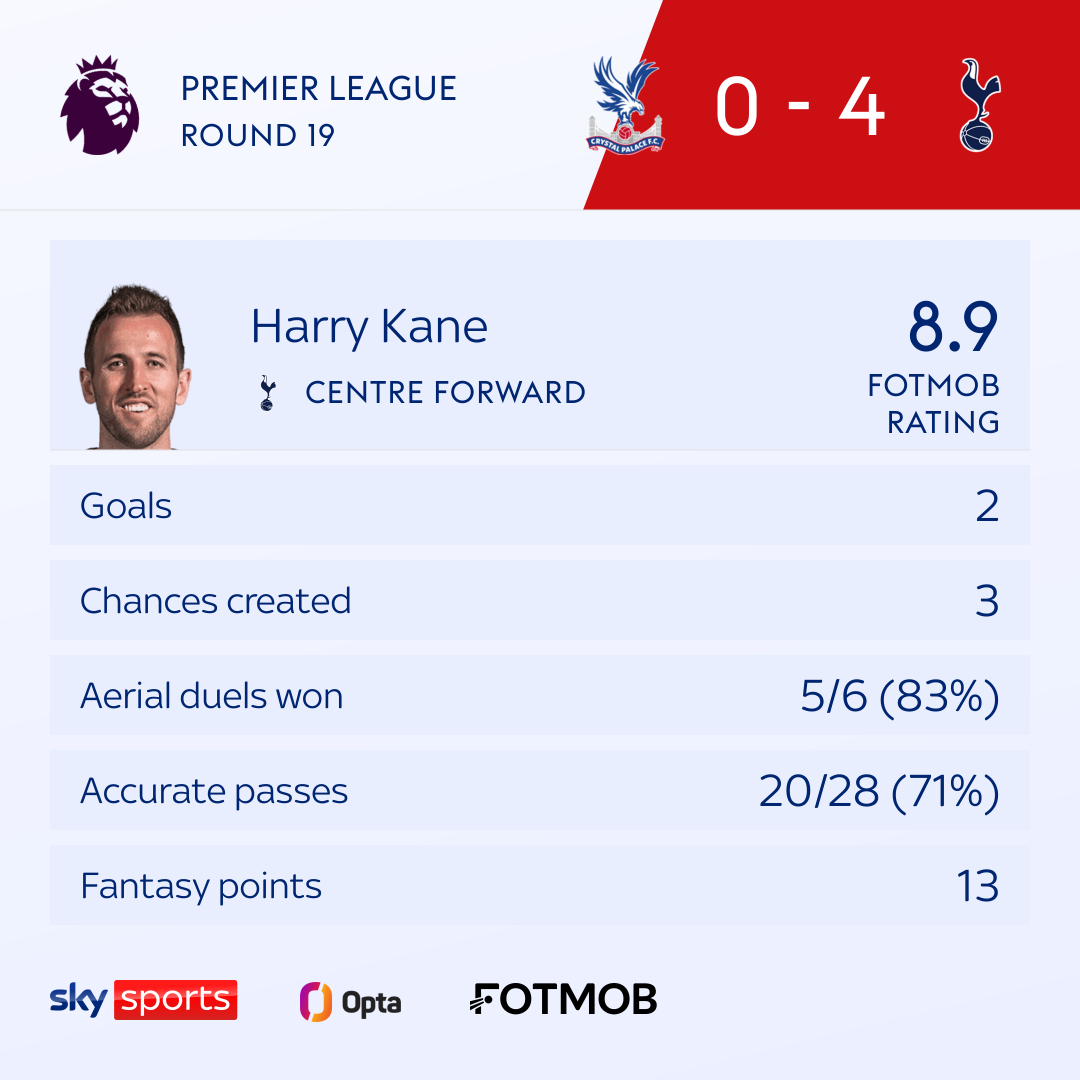 "Really important [result]. We've not come back and had the best results, we did well at Brentford to get something out of the game and then losing at home a few days ago was tough. It was a tough game today away from home so it was nice to put that performance in.

"I thought we started the game well, so it was more just getting back to that in the second half. It was about moving the ball quick, getting runs in behind and then just quality in the final third.

"These are the games, if you go 1-0 behind, you can find it really difficult to get back into it. The games are coming thick and fast so it was great to get three points here.

"Hopefully we can carry this momentum into the games ahead." 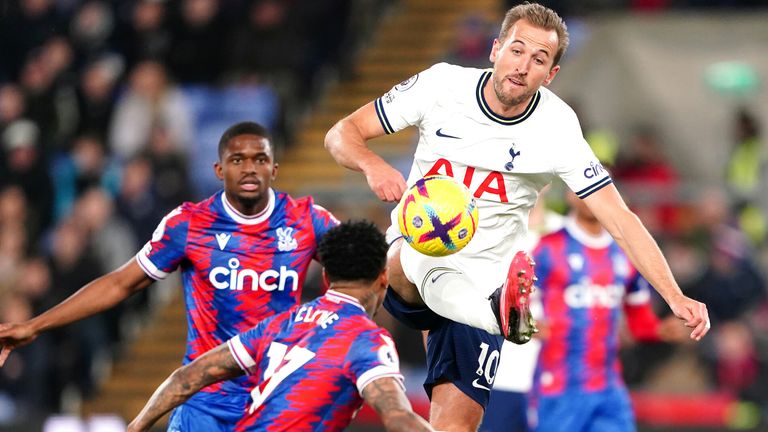 Speaking after Tottenham's 4-0 win over Crystal Palace in the Premier League, Graeme Souness claimed that Harry Kane is the only world class England player but suggested he had a poor World Cup campaign

Conte happy with Spurs 'reaction' | 'Important for Son to score' 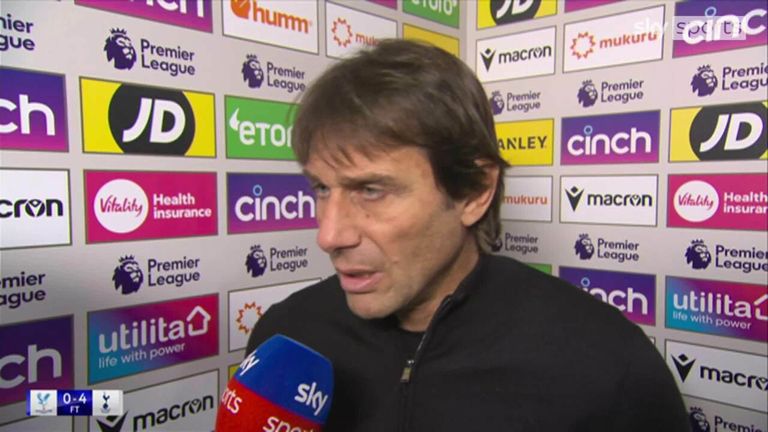 Tottenham manager Antonio Conte claims Heung-min Son's goal in the 4-0 win over Crystal Palace is important for his confidence and has praised his defence for an important clean sheet.

"It was a good reaction. It's not easy to win against Crystal Palace away, we are talking about a really good team, well organised.

"After the first half it was in the balance, then in the second half we exploited chances to score and then we finish with a good final result.

"The message [at half-time] was to continue to play, because we started the game very well and then in the second part of the first half we lost a bit of the possession. I think we played a good game, we were well organised without the ball, we tried to press high.

"I'm happy because our strikers scored, Harry scored twice and Sonny finally scored. It was really important for him, because we are talking about a player who needs to score and feel confidence.

"It didn't look good at half time. You wondered how the second half, and Tottenham's season, would pan out. But when you've got a player like Harry Kane, who can do what he did, it makes the world of difference.

"Conte will just be hoping his centre forward can stay fit and the same applies to Son, because they can lead the charge against any quality of opposition. It's been a fantastic night for Tottenham and much needed."

Vieira: We were brave, but weren't clinical enough | 'Experience the difference' 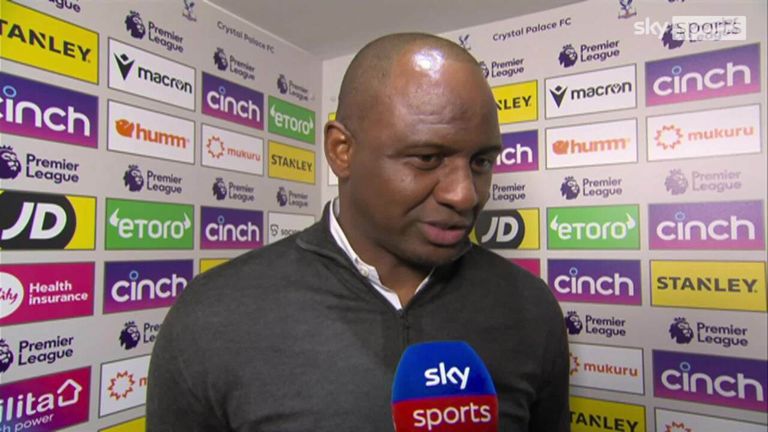 Crystal Palace manager Patrick Vieira claims the 4-0 score line in the defeat to Tottenham in the Premier League doesn't reflect the quality his side showed during the game.

"It was a tough night in the end. Conceding four goals is not something pleasant at all, but again, it doesn't reflect the quality of the game we played today. We deserved more, especially from the first half with those chance we created.

"Of course, when they scored that first goal, it became really difficult for us. When those players have a little bit of space, they can hurt any team, but the way they managed the game and those difficult periods they had shows a huge difference between the two teams. The experience was a massive factor on the game today.

"We weren't clinical enough, we didn't take our chance well enough. We had a couple of passes to put players in a better position to score. Our last ball in the final third wasn't good enough and Lloris makes a couple of important saves.

"But we were brave, we showed quality and at the same time, the fact we concede four goals shows there are a lot of things we need to improve.

"We have young players in our squad and that kind of game have to be managed better. The experience allowed them to be strong and to score those goals in a period where they were dominant. There are a lot of things to take from that game.

"But you have to give credit to Tottenham because they looked solid, in control and they're waiting for their moment to take these chances. With the quality they have, they don't need to create a lot to score.

"But I believe that the 4-0 is hard for my players, is hard for the club. But we still have a lot to take from that."

Both teams are in FA Cup action this weekend - Crystal Palace host Southampton while Tottenham welcome Portsmouth. Both matches will be played on Saturday with kick-off at 12.30pm.