Report and highlights as both sides wanted to win to take charge of second place behind Belgium in World Cup Qualification Group E but the spoils are shared; Dan James spares goalkeeper Danny Ward's blushes after his extraordinary error Dan James scored a crucial equaliser for Wales in a 2-2 World Cup Qualification draw with Czech Republic to spare the blushes of goalkeeper Danny Ward.

In a game that was being billed as the play-off for second place in Group E with both teams level on points, Wales played bravely in Prague and got a deserved lead through skipper Aaron Ramsey on 36 minutes.

However, a defensive lapse just 106 seconds later allowed Jakub Pešek to draw the hosts level when firing home a rebound after a Ward save.

Ward was left even more red-faced four minutes after the restart after miscontrolling Ramsey's backpass and getting the final touch on the Czechs' second goal.

However, James secured the point Wales more than deserved in a thrilling contest.

The draw leaves Wales and the Czech Republic locked on eight points behind runaway group leaders Belgium - and the Dragons still have a game in hand on their rivals.

Man of the Match: Aaron Ramsey

Even if they finish outside of the top two in Group E, Wales are all but guaranteed a play-off place thanks to their Nations League success.

How bright and bubbly Wales shone in Prague…

Wales had beaten the Czechs at home in March to strike a blow in the battle for second place, and knew that defeat in Prague would probably leave them relying on their 2020 Nations League results for a place in March's World Cup play-offs.

The Wales players made their usual pre-match stand against racism by taking the knee and were roundly booed by home fans.

Ramsey made his presence instantly felt by clattering into Novak after 13 seconds to earn a yellow card.

Wales escaped when Ward pushed out Pesek's low drive and Neco Williams completed the clearance, but they - and Ramsey in particular - continually probed and threatened throughout an entertaining first half.

A mix-up in the home defence allowed James to advance before skying wide and an even better chance arrived after 18 minutes when Ramsey released James, who dithered before finding Kieffer Moore. The striker was still favourite to beat the onrushing Vaclik but failed to do so.

Ethan Ampadu led a rapid break and Williams played his cross into a dangerous area. James failed to get a touch on the ball, but Ramsey was racing in behind and he sat down Vaclik superbly before tucking away his 18th international goal.

The lead lasted barely more than a minute as Novak broke beyond the Wales defence and Ward pushed out a shot that might have been straying wide.

Williams slipped at the wrong moment and Pesek pounced in front of a gaping goal.

Worse was to come for Ward with his loss of concentration ending up with him touching the ball onto the post. The Leicester goalkeeper desperately tried to retrieve the situation but both he and the ball ended up in the back of the net.

Wales responded excellently to the hugely unfortunate moment with the substitution of Harry Wilson coming on in midfield shifting the momentum back in their favour.

Wilson capped a superb cameo from the bench when slipping in James and his excellent lofted finish beat Vaclik and survived a VAR review.

Moore and Ramsey almost won it for Wales late on, but a furious contest ended all square with the race for second place set to go down to the wire.

Wales boss Robert Page said: "As a neutral it was a great game to watch. I thought the lads were outstanding, we've created enough to win four games of football. 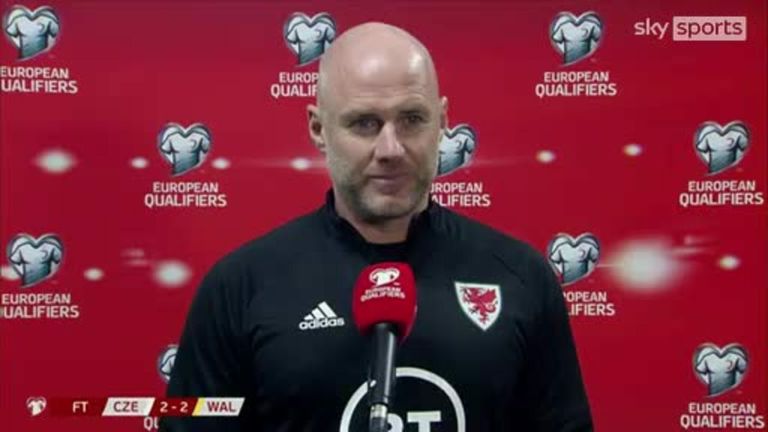 Wales' Robert Page was full of praise for Danny Ward despite his mistake giving Czech Republic a goal in their 2-2 draw.

"To take the game to them in the manner we did, they deserve full credit. We were in complete control, we wanted the win and the supporters were outstanding and helped us along.

"If I'm going to have a slight criticism it's that we need to be ruthless, at this level you have to punish teams when you're on top. Kieffer Moore was through one-on-one, but as a group I can't speak more highly of them.

"We've just said a draw isn't the worst result, we go again on Monday against Estonia who had a positive result tonight as well. Danny Ward has been superb for me, I'm fortunate to have three outstanding goalkeepers, but Ward will absolutely bounce back.

"It's a pleasure to watch Aaron Ramsey play, as well as all of them, everyone of them to a man was fantastic."

Wales visit Estonoa in their next World Cup Qualifier on Monday, live on Sky Sports; kick-off at 7.45pm.